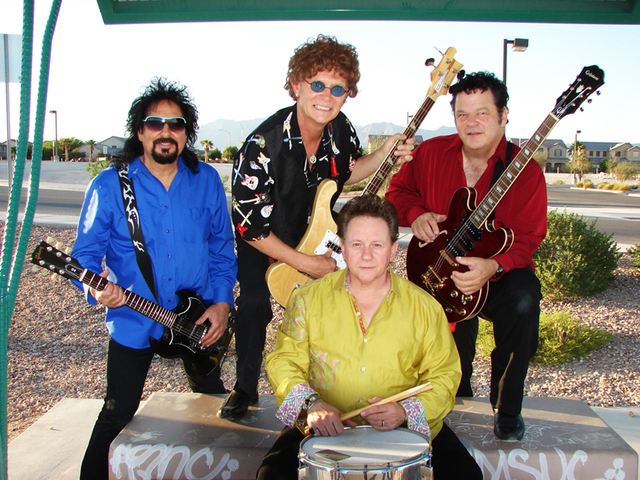 Las Vegas oldies band, “The Sixties Sensation,” has landed an every-Sunday gig at the Maverick Saloon &Dance Hall. The afternoon to early evening show will be from 3 p.m. to 7 p.m. and is being called a “sock hop” by band leader Hal Singer.

“The music is all oldies, although you might hear songs from the 50s and 70s, too.”

The band was formed on Jan. 1, 2009 in Las Vegas with Singer and Johnny Rocker. The four-man group made their debut at The Palazzo in front of the Jersey Boys stage. The band has played The Cannery, Eastside Cannery, Lake Las Vegas, Laughlin, Mesquite and Pahrump.

In concert, they have opened for Peter Noone &Herman’s Hermits, Bobby Vinton, Gary Lewis &The Playboys and Gary Puckett &The Union Gap. They have also performed on television with Denny Laine of Paul McCartney &Wings and The Moody Blues.

Mike Hickey is hosting an open mic combined with a jam session every Sunday from 1 p.m. to 5 p.m. at the HUBB, the former location of Charlie’s Place on Bell Vista.

Hickey said the entire building has been renovated and the atmosphere is friendly and welcoming.

The area is gearing up for gardens this time of year and the University of Nevada Cooperative Extension office is offering a two-hour seminar on planning and maintaining a veggie garden. The event, set for today, Feb. 28, from 10 a.m. to noon will include a video presentation on everything from planning the garden to harvesting. There will be a discussion and a hands-on demonstration.

While you’re on the phone with Debby Woodland, UNCE Master Gardener, you might want to sign up for the very popular “Grow Your Own” classes which will begin April 3. Space is limited and classes fill quickly.

The spring session will cover topics from beneficial insects to pest control.

There are eight classes, scheduled from 6 p.m. to 8 p.m., every Thursday through May 22. Other topics include organic gardening, soil amendment and preparation, how to grow tomatoes in the desert, everything you wanted to know about fruit trees, planting raised beds and how to keep your own bees.

Sign-up for all eight classes is $50 or $10 each for individual classes. Registration forms are available at UNCE.

Shoshone Museum will host a Winter History Talk Wednesday, March 5. Presenter Judy Palmer will uncover the actual history of the mysterious Carl Mengel, better known as the one-legged prospector of Death Valley. He was an elusive figure and most of what is known about him comes from the stories he told to others. Since he left little documentary evidence of his activities, it is likely the stories contain gross exaggerations and convenient omissions. This presentation will include new information about his life in central Nevada, and explore the early career of a person who later became a legendary Death Valley historical character.

The talk will begin with refreshments at 5:30 p.m. and the presentation will begin at 6 p.m. The talk is free but donations are appreciated.

Next Friday, March 7, is the deadline to make reservations for the Court Appointed Special Advocates Crab Fest fundraiser. Sponsorship opportunities are still available until then as well.

Businesses can sponsor the crab, chicken or salad and the requested donation ranges from $1,000/$800/$500 respectively. There are perks with sponsorship including tables, promotional mention, banners and signs.

Individual reservations are $45 per person. Festivities include raffles and CASA is taking donations of raffle prizes as well. Call 513-9514 for reservations, donations and more information.

The Pahrump Arts Council is sponsoring the United States Air Force Band of the Golden West clarinet concert at 7 p.m. March 28, in the high school auditorium.

“Wild West Winds” tickets are available from 9:30 a.m. to noon at the PAC office, 2340 E. Calvada Blvd., in the Cahlan Office Complex and at the library. The concert is free, but tickets are required for admission.

Tickets for the annual organ concert at Scotty’s Castle are going quickly. The concert given on the Welte-Mignon theater organ are held each year and the money raised helps maintain the organ, installed at the castle in 1928.