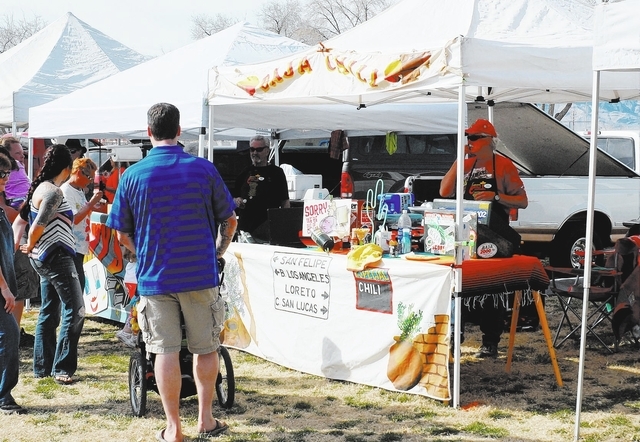 It’s time for the fundraising season to begin and it certainly will have a kick-off Feb. 28 through March 2 when No to Abuse makes a weekend of it. Festivities are scheduled from one end of town to the other and include a range dinner, a chili cook-off, a golf tournament and an “All-Star Revue.”

There will be thousands of dollars worth of raffle prizes up for grabs during the series of events.

This is the second year for the chili cook-off with festivities in Petrack Park. No to Abuse Treasurer Ron Frazier said that event raised about $5,000. “This year we hope to top $10,000.”

No to Abuse operates off of grants but Frazier said, “We use the funds from this event to supplement the grants when they run out.”

The Silver State Chili Cook-off is a three-day, family-friendly fundraiser for Nevada Outreach Training Organization/No To Abuse and the Nye County Child Advocacy Center. Frazier said, “We’re raising funds to continue education programs and services for men, women and children who are victims of domestic abuse and sexual assault crimes.”

The weekend begins with a barbecue pulled pork dinner served from 4 p.m. to 7 p.m. Feb. 28, in Petrack Park. The menu includes sides of corn, beans, and potato salad plus dessert. The food is being provided by the Pahrump Nugget and tickets must be purchased in advance at a cost of $8 per plate. They are available at the Pahrump Chamber of Commerce, Pahrump Nugget and Frazier Furniture Monday through Saturday from 9 a.m. to 5 p.m., and on Sunday from 11 a.m. to 3 p.m., or by calling 775-727-3665.

Live entertainment from Dan Schinhofen and friends is also on tap and beverages will be for sale from the VFW.

The Silver State Chili Cook-off will be from 9 a.m. to 4 p.m., Saturday, March 1 in Petrack Park. The event features free entertainment all day with local musicians, a Las Vegas band, the Pahrump Gunfighters, a demonstration by Dragon Cloud Dojo and other performances. A Classic Car Show has been organized by The Valley Cruisers.

Food is also on the agenda. A Taste of Pahrump is a delicious taste of what Pahrump restaurants have to offer and there will be vendors. The Pawsitively Daffodil Walk-a-Thon will begin at 10 a.m. The walk is a benefit for Symphony Animal Foundation and The American Cancer Society. Call Julia Musall 702-673-8778 for details.

There are two chili competitions, the International Chili Society (ICS) sanctioned competition and the Community Chili Cook-off. The public can taste the chili by purchasing tickets, 10 tastings for $5 and they can vote for which chili they enjoyed most.

The ICS competition will have three categories; Chili, Chili Verde and Salsa evaluated by a panel of professional judges and competing for $1,000 first prize in the Red Chili Division.

The Community Chili Cook-off competition will be judged by public vote as well as the judges and there’s a $100 first prize. Trophies will be awarded to the top three of the Judges Choice and the People’s Choice competition.

The chili cook-off has drawn the attention of champion chili cooks from far and wide.

There is more. Saturday evening, March 1, there will be The Silver State All-Star Revue set from 7 p.m. to 9 p.m., in the Nevada Treasure RV Resort ballroom.

On Sunday, March 2, there will be the Silver State Chili Cook-off 2014 Inaugural Golf Tournament to be held at Mountain Falls Golf Resort. It will be a shotgun start at 8 a.m.

The cost is $75 per person in a four-person team scramble. Prizes and trophies will be awarded. Part of the festivities include contests and raffles. The award ceremony will be held in Mountain Falls Grill Room immediately following the event. For additional information contact Don Luttrell at 805-302-4248.

The events will conclude with a live band at the Pahrump Nugget starting at 7 p.m.