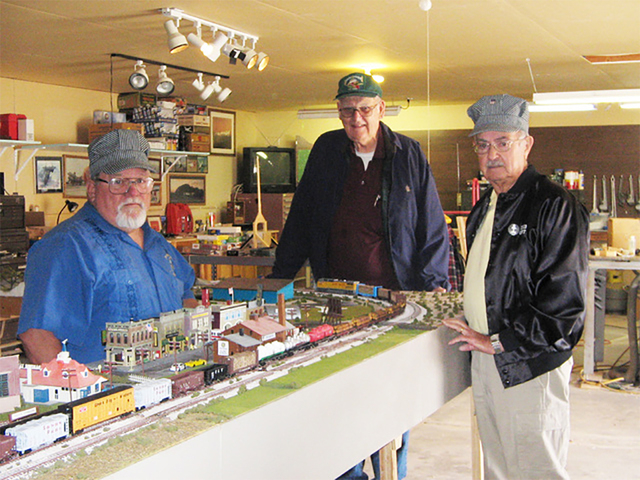 It’s been a perennial favorite underneath the Christmas tree for more than a century, and it hasn’t seemed to have lost its appeal among enthusiasts and collectors.

Model trains continue to amuse both the young and old with their authentic sights and sounds of the mid-19th century industrial revolution era, to long-distant passenger travel of early 20th century America.

Pahrump resident Frank Heyer was bitten by the rail bug and a young child when he received his first train set.

A few decades later, he’s still playing with trains, but on a much larger scale.

Heyer and a few friends formed the Pahrump Railroad Club where they regularly meet, talk and simply relive the “good old days.”

The club began setting up their respective displays Thursday for public viewing at the Pahrump Community Library. They will hold shop there through Saturday.

“I have had a passion for trains since I was four years old,” he said. “I just like trains. I started out with my Lionel o-gauge which a lot of guys had. I’ve talked to guys who tell me that they had a Lionel train set when they were a kid. I asked them where it is today, and they tell me they really don’t know, because they think their mother may have given it away years ago.”

The railroad club has been in existence for close to 10 years.

Heyer said they began regular meetings at the Artesia Clubhouse on the south end of town, but the group was forced to seek an alternative venue.

“They started increasing the amount of money that we had to pay them to set up there. “We decided that we would look around and find some other place that would not charge us and the Pahrump Community Library has been very gracious to accommodate us every other month.”

HO-gauge model trains are one of the most popular scales among enthusiasts.

Heyer said it basically denotes the size of the train sets.

All of the members use that particular scale.

“We build modules that are basically four-foot long, two-feet wide and 40-inches tall,” he said. “We then clamp all of the modules together. All of the modules have different city and town themes complete with crossing gates, tunnels and other accoutrements. Depending on where we are, we may have 30 modules. We put them into a loop and the trains are continuously running around.”

The group has informal meetings during the months they are not running their trains, to discuss upcoming displays, and which members will participate.

Heyer said the railroad club is always looking for additional members who share their passion.

He spoke of one well-known entertainer who loved model trains.

“Frank Sinatra was also a big train enthusiast,” he said. “He was into the Lionel trains and Lionel o-gauge when he was over in Palm Springs. I happen to have the very same train that I got when I was four years old. I am also into live steam as well, and I built a live steam locomotive.”

Additionally, Heyer said the public is welcome to visit the library to watch the trains run and learn more about the group.

“All they have to do is come down to the Pahrump Community Library and we will take their name and phone number,” he said. “Anybody is welcome to stop by and visit with us and get information on our Pahrump Railroad Club.”