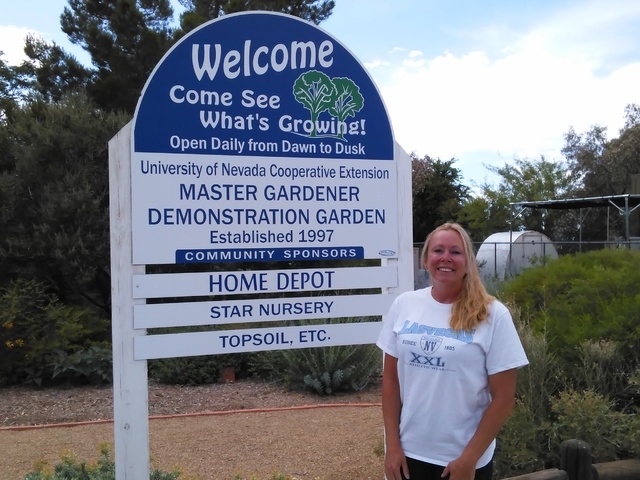 This week, Hasse, who is a master gardener, said her new position is both challenging and exciting.

“The job reminds me of coordinating a wedding in a way, because when you hold an event you have to have everything just right,” she said. “I did it for my own wedding, so I know what it’s like firsthand.”

On Wednesday, Hasse led a group of kids interested in becoming gardeners.

The kids were preparing to plant seeds and learn about creating a compost heap.

“They are creating a Native American garden called ‘three sisters,’ she said. “You start with corn and then you put in the beans, which will climb up the corn stalk. After that, you put in squash or zucchini around it to shade the lower part of the plant.”

At present, there are roughly 15 kids in the Junior Master Gardeners program.

Hasse said parents who want to enroll their child can just drop by the office at the corner of Dandelion Street and Calvada Boulevard.

The fee, she said, is $1 a year for insurance coverage.

“Their parents take them up to the office and pick up and fill out an enrollment form,” she said. “Depending on what they want to do, they have to be a certain age. For our shooting sports you have to be between 11 and 19 years old. We offer archery and air guns.”

At present, Hasse said she is seeking a person knowledgeable in the art of sewing to help with sewing classes.

“Right now I’m looking for a sewing leader because one of my sewing leaders has some health problems,” she said. “Anyone who knows how to sew and has some time on their hands are welcome to apply. Of course we have to do background checks because they are working with kids and that’s the law.”

Leading by example, in terms of gardening, Hasse and her husband have a full-blown garden at their residence, including an herb and vegetable garden, along with fruit trees, goats and chickens.

“My job is very fun but also very challenging,” she said. “I’m settling in though, which is the best part. We just wrapped up our ‘Art in the Garden’ event on Sunday. It’s an annual thing that we put on every May. It was a lot of fun and people really enjoyed it.”

For additional information on classes and workshops call 775 727-5532.

The site is located at 1651 E. Calvada Blvd., on the grounds of the University of Nevada Cooperative Extension.