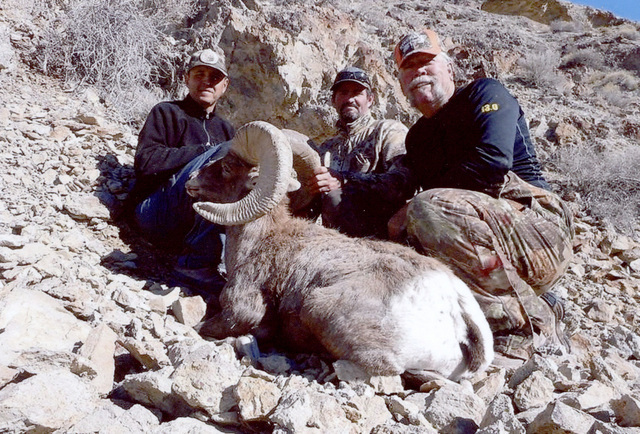 Larry Strickland, far right, poses with the big ram he fell with a .338 Winchester Magnum late last year. He had waited 37 years for the elusive Nevada Desert Bighorn Sheep tag. Special to the Pahrump Valley Times

Larry Strickland of Strickland Construction Co. hit the jackpot, but it took him 37 years of applying for that elusive Nevada Desert Bighorn Sheep tag.

When wife Debra, who you may know as Penny Pepperbox with the cowboy action shooters group, checked the mail late one evening, she opened a letter from the Department of Wildlife and was as excited as he would have been, if he had still been awake. But knowing he would have been up all night calling friends and celebrating, she let him sleep and surprised him in the morning with the news of his sheep tag and a fresh cup of coffee.

What better way to start a new day.

Larry, also known as Lash Latigo, began immediately making plans and putting gear together for this once-in-a-lifetime hunt. He enlisted the services of Victor Travalini, who has a reputation for hunting, and finding, big rams.

When the Thanksgiving weekend came, it began to snow, but he with guide Gary were on their way to the Stillwater Range and soon found a group of 12 rams that Victor had been keeping an eye on. They began the long hours of glassing and finally put a big ram to bed as it grew dark.

They would start first thing in the morning to put a stalk on him, but as they approached the snow-spotted ridge the next morning, he was nowhere to be seen and they decided to look over the next ridge, and the next, and the next, hoping to relocate their wandering prey.

They were about ready to give up and return to the original site when they decided to try one more ridge and they found part of the group which had broken up, but the big ram was there, at 275 yards.

Resting his rifle on his pack, he chambered a .338 Winchester Magnum and shot. He heard the bullet ricochet, but the sheep was hit and stumbled forward toward the cliff. He shot again and put it down instantly, but too late, as its momentum carried it over the cliff and 150 yards down the shale slope.

They quickly, but carefully rounded the shale slide and found the magnificent ram (which later scored 168 and ¾) with not two, but three bullet holes. Yep, the ricochet having gone through, had re-entered the ram. As they reverently sat admiring and honoring the fallen animal, they reflected on the significance of this final day, Dec. 1, Larrys birthday.

The hunt began on Thanksgiving Day, Nov. 26. Larry was certainly thankful, presented a spectacular birthday present and it was a great way to start the Christmas holiday.

That made for an exceptional season, a magnificent animal and the end of a 37-year quest, but for Larry it doesnt end there. This fall hes off to Alaska for an epic Moose hunt near Fairbanks (the real north).

If successful, it will complete his North American Slam, which is a major achievement in the trophy hunting world. It should also give him enough good Moose steaks and roasts to carry him through the winter, with perhaps even a few for his friends.

It makes me wonder where and what comes next, but Im sure he wont be alone. You see, wife Debra is a master hunter too and she accomplishes the task with a pistol, the proficiency of which she has demonstrated not only here in the states, but also on dangerous game on Safari in Africa.

Well tell her story in one of the next columns of Sportsmans Quest.

For us back home its time to get ready for this years season, if we were lucky enough to draw a tag or plan on hunting out of state; I plan on both. The next column will cover getting ready, both physically, mentally and include that all-important to do list as we get our gear together.

Good luck and be safe.

If you have a story or comment about this or other articles, please contact me at dansimmons@usa.net or give me a call at 775-727-6444.

Dan Simmons is a Pahrump resident and an avid outdoorsman.