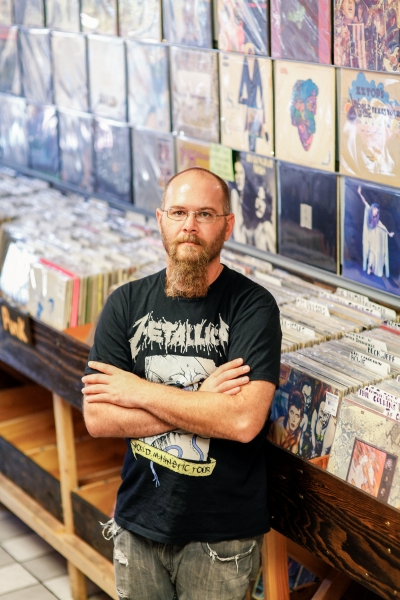 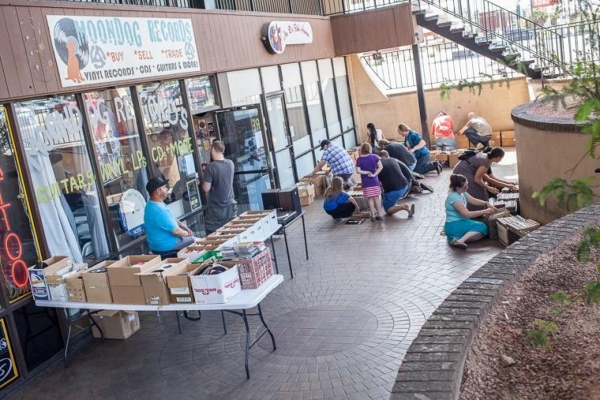 Clint McKean is a good record keeper, that is, keeping track of collectible records.

McKean opened up Moondog Records in Las Vegas near UNLV just over two years ago and recently expanded his record search to Pahrump. He comes out to Pahrump when he gets a call from someone who may want to sell their old records and music collections.

McKean, who is in his early 30âs, started appreciating vintage vinyl records when he was about 12 years old, but didnât have the money for it.

He started doing research, continued his interest, and it just went from there. It wasn’t a family thing, even though his parents collected antiques, they never collected records.

It’s interesting that many younger adults, like himself, prefer the traditional vinyl 45s and LPs.

“Yeah, it’s something about it, you know, ah, the feel of the vinyl, ah, you know just something you can’t capture from holding a CD in your hand or listening to an MP3,” McKean said. “And you know thereâs always arguments about what sounds better, CD or vinyl.”

He added that he has a few CDs in his whole collection and thatâs only because they never made it to vinyl.

McKean has seen younger kids in his store with an eye for the “oldies”. Some of his clientele can range in age from 13 or even younger if their parents have the money.

“You know, I donât see them that young that often,” he said. “But I do, occasionally, I’ve had like a 10 year old in here looking for doo-wop 45s with his parents.”

He explained that in the â90s when CDs really took off, record labels were more selective about marketing vinyl. Not every recording artist got on vinyl, so the production numbers were much less: 1,000 to 5,000 copies, McKean estimated.

But it’s not just records that are making a comeback.

“There’s been a resurgence in cassettes as well,” McKean said. “A lot of heavy metal and punk bands are releasing albums on cassettes. You know thereâs a decent market for cassettes. I sell more cassettes probably than I do CDs, believe it or not.”

McKean added that not too many dealers really seek out cassettes. Itâs not a “huge mover”, but he does find people who are into heavy metal, punk and new wave finding the right artist in cassettes.

McKean received numerous phone calls from Pahrump from individuals looking to sell their records after placing an ad “We Buy Records’” in the Pahrump Valley Times, and started making trips “over the hump.”

Noting that one time he may have only acquired 30-40 records during one trip, but there were a few that made the trip worth it.

What is McKean looking for in record collections?

“You know it just really comes down to what pressing it is, whether it’s stereo or mono pressing,” he said. “And condition is the most important thing. You know condition determines what I can resell it for.”

He clarified that even the right things which may not be in great condition may still sell since they are hard to find. Personally, he would like to find a 45 picture sleeve from the Rolling Stones “Street Fighting Man”, adding he’d be “shocked” if anyone had one. Many picture sleeves have been “faked” or bootlegged over the years.

Only certain Elvis records are considered valuable. Most of “The King’s” records that used to be rare are common with eBay and other online sellers flooding the market, killing the value according to McKean.

“Primarily, I stick to rock and roll, ah, doo- wop, blues and black jazz,” he said. “No Benny Goodman or any of the white jazz or Frank Sinatra type stuff; I just can’t do anything with it.”

McKean will continue to come out to Pahrump as long as people have record collections and music memorabilia for him to check out. He also buys old vintage guitars, turntables, old concert posters and stereo equipment.