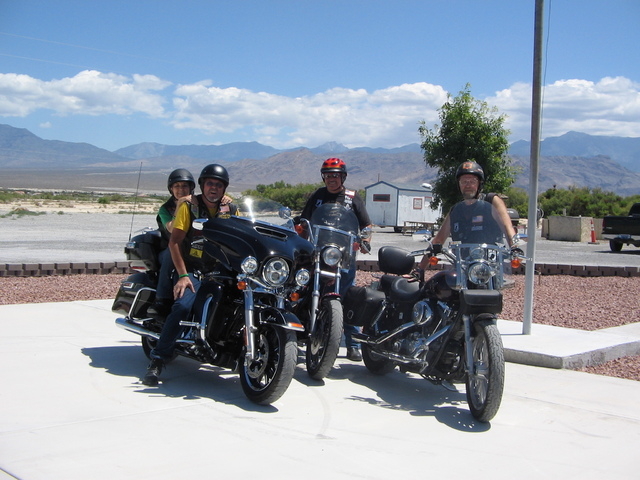 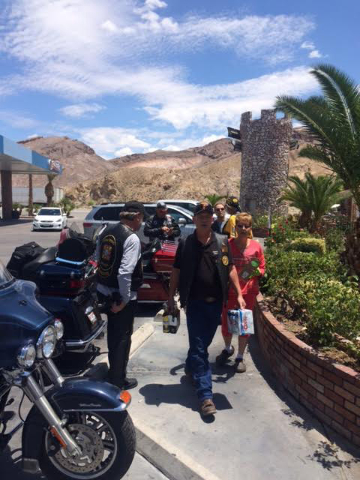 local veteran’s chapter is hoping to draft new recruits for its riding organization.

The Veterans of Foreign Wars Riders is a statewide motorcycle group with about 225 members from the north, south and central regions of Nevada.

Pahrump resident Paull Engs is now commander of the central region for the riding group after a promotion from captain earlier this week. Engs is actively seeking motorcyclists from his region which includes Pahrump, Amargosa, Tonopah and Beatty.

He currently has a handful of riders from Pahrump and none from the other three towns. Riders are needed for Pahrump’s upcoming Fourth of July Parade, and at least 10 are required for him to accept an invitation to be in the Rose Bowl Parade in Pasadena, California.

Members of the group do more than just ride for fun. They like to help the community by donating food to the VFW Post #10054 food bank at 4651 S. Homestead Road.

They recently rode approximately 75 miles to Boulder City and with members of the American Legion placed flags on graves there. During the Christmas season, they joined with riders in Las Vegas to deliver toys to kids and have participated in events for children and adults with Down syndrome.

Engs commented about his efforts to enlist more riders.

He said he goes into Walmart, for example, and people thank him for his service. That’s what the group likes to do, help others.

Engs welcomes all motorcycle (cruisers) or trike riders in three categories. Someone can be a veteran, an auxiliary member (qualifying family member is a vet), or a supporter with no military connection.

His wife, Janet, rides behind him on his Harley Davidson whenever she can and wears the ladies auxiliary patch on the back of her vest.

“I like that too, just riding a bike, being out in the open, meeting people, being out there, seeing what’s going on and helping people out,” she said.

She is currently the only woman member and would like to see others join the group. In her opinion, women shouldn’t worry about their age or feel they are too old to ride.

“I think if most women get into it, they’ll really enjoy it, the freedom, you know, and everything,” she said.

Lee Foglesong saw Engs’ ad in the Pahrump Valley Times and called to join. He is a rider (supporter) with no veteran connection.

“I support veterans in what they do and I love to ride motorcycles,” he said. “So, I joined this group in order to get more riding in with good people.”

Foglesong has been on several runs with the group and looks forward to others. He said that being a member encourages him to do more riding.

“Paull has a lot of rides scheduled and it gets me off the sofa and out on the highway where I’d rather be,” Foglesong added.

John Sheets, a Vietnam vet, joined the group about four months ago because he likes to ride, which he calls a “freedom.”

“You can’t explain it, for anybody else, it won’t make a lot of sense to them,” he said. “It’s just, you get on it, you either love it or you hate it. I have a granddaughter who won’t get anywhere near it and that’s fine.”

Other than having a motorcycle, or a trike, newcomers must undergo some basic training before riding which includes obeying hand signals and learning safety rules for riding in a group.

“You can’t just expect people to get into a group and ride,” Sheets said. “It wasn’t too long ago that they had an actual motorcycle group down on 160 coming back up that had a multiple bike crash that killed one guy. And they supposedly knew what they were doing.”

On Wednesday, the group joined other VFW riders from around the state for a motorcycle run from Beatty to Las Vegas where the VFW state convention is underway.

Any riders interested in joining the VFW Riders should call Commander Paull Engs at 775-513-7301 to be trained for the ride in Pahrump’s July Fourth Parade.