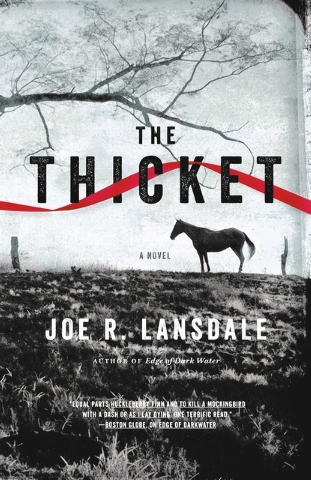 You know who your friends are.

They’re the ones who keep your secrets or your car keys when you need them to. They’ll loan you five minutes or $5, tell you when your ideas are good and your breath is bad, and can be counted on, but never out. You’d like to think they’d even take a bullet for you but, as in the new novel, “The Thicket” by Joe R. Lansdale, you hope you’ll never have to know.

It all started with the pox.

Right after Jack Parker and his Grandpa finished burying Jack’s Ma and Pa, dead from the disease, Grandpa decided that Jack and his little sister, Lula, would be better off in Kansas City with their Aunt Tessle. And that might’ve been true — they’d never know because, while crossing the Sabine River, they were attacked by bandits and Lula was kidnapped.

His Grandpa dead, his sister gone, 17-year-old Jack ended up in a nearby town where he hoped to find The Law but instead found a dead sheriff, a black boar hog with tusks, and a tall Negro man who was commencing to bury the aftermath of mob justice.

The man introduced himself as Eustace, and told Jack that he was a tracker and could help him find the men that took Lula — but it wouldn’t come cheap and he wouldn’t do it unless they could “get Shorty to sign up.”

With the hog tagging alongside, Eustace took Jack down a “rabbit path” to meet with Shorty. As they neared Shorty’s home, Jack saw a child peering through a telescope and it took him a minute to understand that he wasn’t meeting with a child. He was meeting with a dwarf.

Eustace seemed a little unstable. Shorty seemed to want to kill, but Jack was a Parker and that wasn’t how Parkers did things. He didn’t want violence or bloodshed. He didn’t want any trouble at all, really. He only wanted his sister back.

And he’d learn quick enough what it would take to get her.

Let’s say you planned to write a story set in, oh, about 1916 in Texas. Borrow a little from The Wizard of Oz, a little Mark Twain, and make a nod toward classic western literature. Add humor, some savagery and remove just about everything “PC” — and you might come close to the perfection that is “The Thicket.”

Actually, scratch that. Don’t even try. Nobody does a modern-western novel like author Joe R. Lansdale.

And that’s good because you won’t find any fully-stereotypical “western” characters in a Lansdale novel. You’ll find the gunslinger, a prostitute and a man-boy who grows up fast, yes, but they don’t do things the way they do in other westerns.

You’ll find them in shocking situations of cruelty and violence with rays of goodness and surprising playfulness, though, and it works. It works wonderfully.

If you’re in the mood for something down-and-dirty but oh-so-enjoyable, here’s your book. Read “The Thicket” and then loan it out carefully.

You know who your friends are…