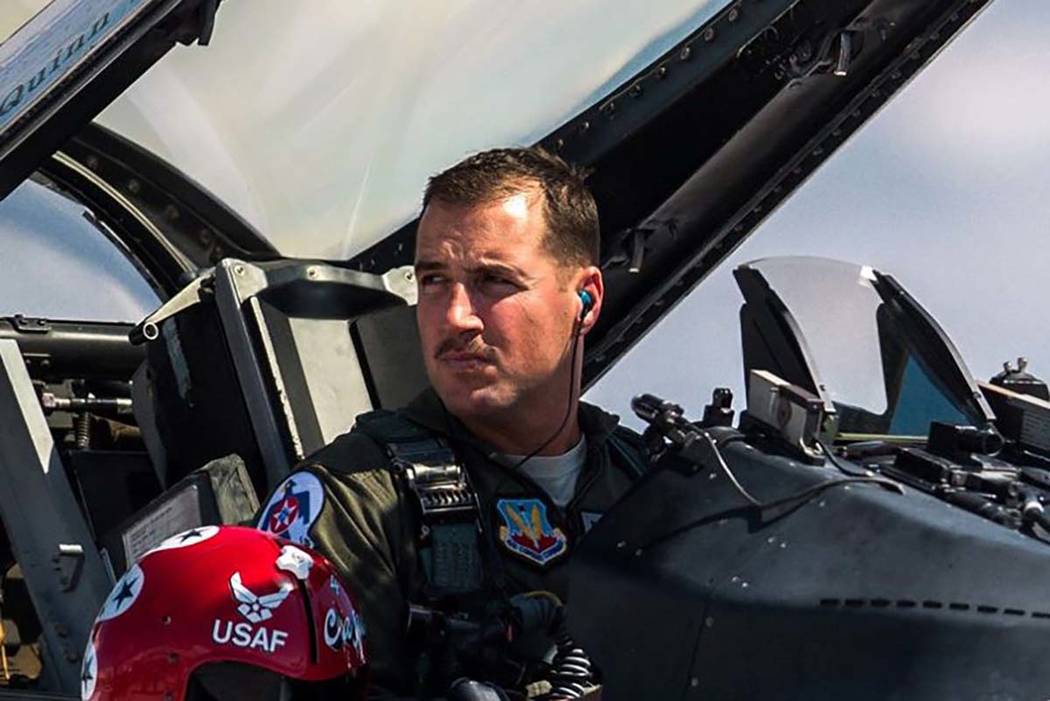 Maj. Stephen Del Bagno, Thunderbird 4/Slot Pilot, awaits the signal to start the F-16 Fighting Falcon during a practice show at Nellis Air Force Base on March 14, 2018. Del Bagno was killed when his aircraft crashed on the Nevada Test and Training Range during a practice aerial demonstration on April 4, 2018. (Master Sgt. Christopher Boitz/U.S. Air Force) 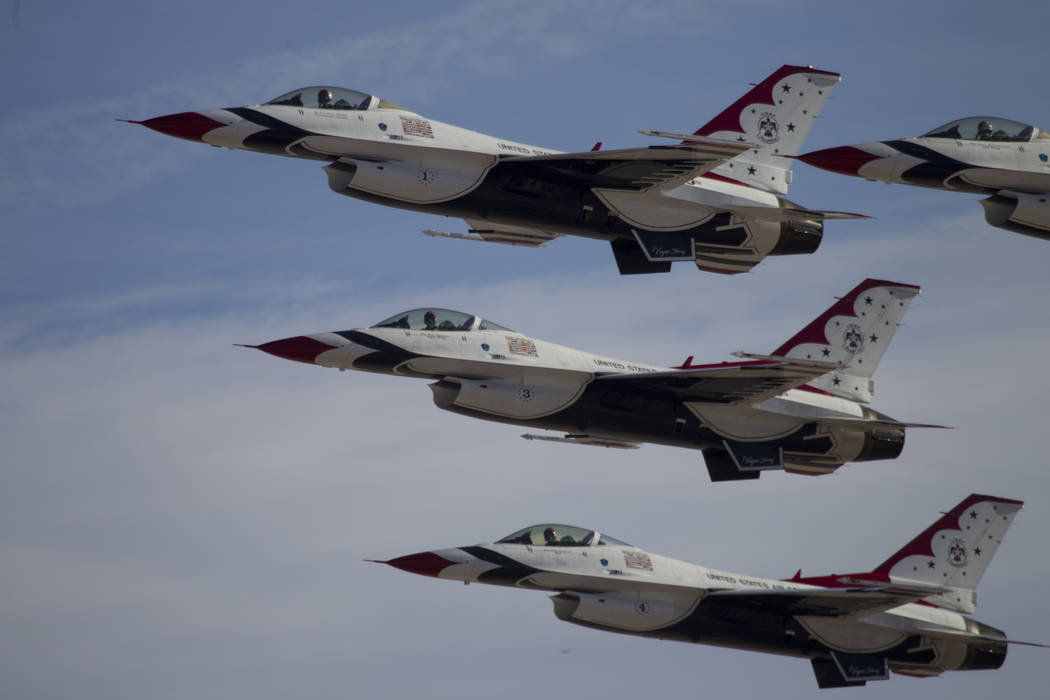 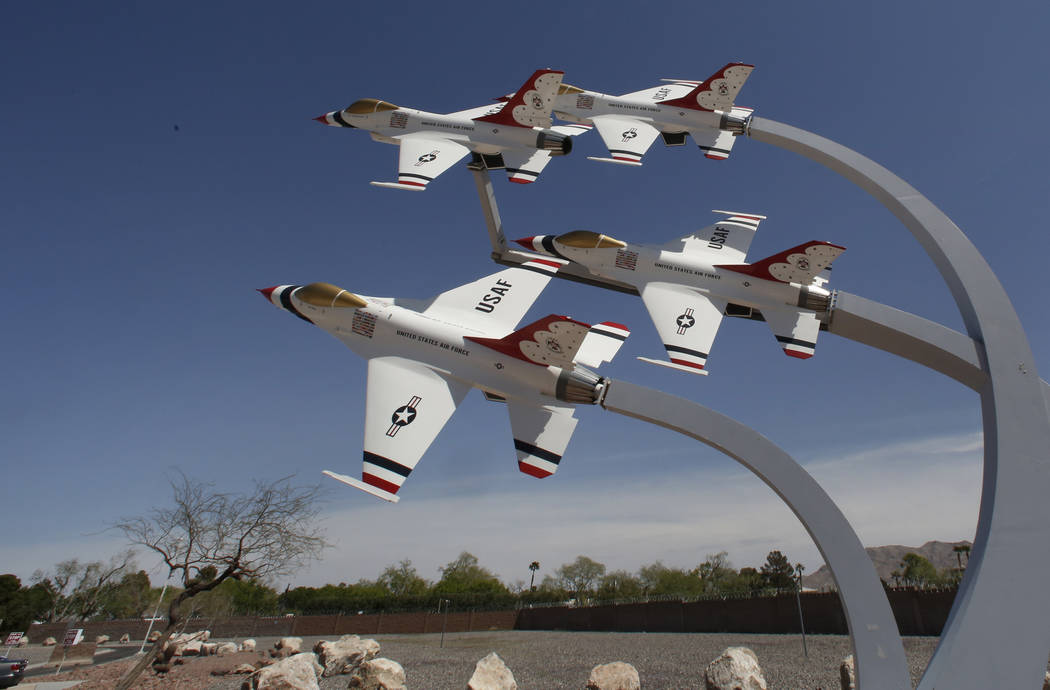 An Air Force investigation into a deadly Thunderbird crash in Southern Nevada earlier this year determined the pilot lost consciousness before his fighter jet slammed into the ground.

F-16 Thunderbird pilot Maj. Stephen Del Bagno, 34, lost consciousness for about five seconds before crashing his fighter jet at a speed of 39,750 feet per minute (just over 450 mph), according to an Air Force investigation report released last week.

He accelerated over the span of five seconds, experiencing a maximum of about 8.56 G’s of force — or 8.56 times the acceleration of gravity felt on the Earth’s surface — prior to losing consciousness, the report said.

It appeared he regained consciousness about one second before impact and attempted to pull the control stick back, but he was likely still experiencing “relative incapacitation” and was unable to pull up in time, the investigation found.

“Based on F-16 dive recovery procedures, once the aircraft descended below 2,300 feet (above ground level) at that dive angle, a safe recovery above the ground was not possible,” the U.S. Air Force Aircraft Accident Investigation Board report said.

Del Bagno, who flew under the call sign “Cajun,” crashed during a training performance of the “High Bomb Burst Rejoin” maneuver about 10:30 a.m. on April 4 at the Nevada Test and Training Range outside of Las Vegas, the report said.

He had completed an ascending half-loop and flew upside-down between 5,500 and 5,700 feet above the ground for about 22 seconds, achieving a maximum of -2.06 G’s of force — the equivalent of about twice the force felt if someone stood on their head, the report said, adding that he lost consciousness while attempting a descending half-loop.

He died on impact. The crash left a 33-by-19-foot, 3-foot deep crater in a desert area with little vegetation, the report said.

His F-16 was one of six participating in the exercise by the demonstration team based at Nellis Air Force Base.

The quick change from the negative G-force to positive G-force created by the turn made him more susceptible to losing consciousness, the report said.

The “High Bomb Burst Rejoin” maneuver is one that Thunderbirds pilots have performed in the F-16 for the past 35 years, and was one that Del Bagno had successfully performed 29 times before, the report said.

In previous attempts, board President Brig. Gen. Case Cunningham wrote in the report, he experienced an average maximum of 7.1 G’s of force.

Those who knew Del Bagno and worked with him had glowing things to say about him, according to the report.

“He was an ‘inspirational’ leader who was always positive and put others before himself,” the report said. “His extended pre-service flight familiarity made him a ‘highly experienced’ and ‘highly capable’ pilot who excelled in his transition to the Thunderbirds.”

The report noted his positive personality and piloting skills made him a “perfect fit for the Thunderbirds mission.”

“A member of his squadron summed up (Del Bagno) as ‘just a beautiful human being,’” the report said.

The report noted that there didn’t appear to be any mechanical, electrical or structural issues with the plane. Del Bagno was in good shape and a qualified F-16 pilot while working with the Thunderbirds, the report said, adding that he “displayed a high degree of aptitude for a slot pilot in his first year.”

Witnesses reported that Del Bagno appeared well-rested and ready to fly the day he crashed.

Requests for comment from the Thunderbirds public affairs office were not immediately returned.