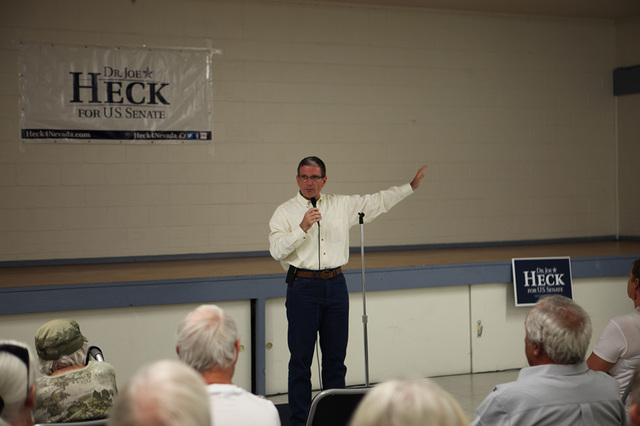 Nevada Congressman Dr. Joe Heck made a weekend campaign stop in Pahrump as he tries to mount support for his U.S. senatorial bid.

Heck spoke to more than two dozen residents at the Bob Ruud Community Center on Saturday.

The stop was one of a handful of rural communities Heck visited during the past several days.

On Friday, Heck’s campaign traveled to Ely, Eureka and Yerington before arriving in Pahrump from Tonopah.

He said Nevadans living in rural communities have unique concerns and challenges than those from larger cities and towns around the Silver State.

“They are concerned with public land use and management and their water rights,” he said. “They also have serious concerns about the second amendment. People from rural areas are also concerned about the bread-and-butter issues such as jobs and the economy, health care, education and national security. Fortunately for me, those four areas are areas that I have lived and worked in my entire life so I can address those issues with firsthand experience.”

Heck, who is seeking to take over the seat being left vacant with the retirement on Democrat Harry Reid, also spoke about the 2016 presidential campaign.

Nevada’s unemployment rate fell to 5.8 percent in April 2016 under the current administration following the nation’s worst recession since the Great Depression under a two-term Republican administration.

“We are getting a great response everywhere we go,” he said. “What we’ve learned after eight years of Barack Obama and 30 years of Harry Reid, people in Nevada are ready for a change.”

“I have high hopes that we will see Donald Trump become the next president,” he said. “Though I don’t necessarily agree with how he talks about women and minorities and all of his policy positions, but if he wants to make America great again by bringing jobs back to America, then I am willing to help him achieve those goals and hold him accountable. And as the next U.S. senator from Nevada, I will make sure I stand as a check against anything that is not in our best interest.”

Heck was elected to Congress following the 2010 mid-term election.

According to his bio, Joe Heck was elected to the United States Congress on Nov. 2, 2010 as Nevada’s representative for the Third Congressional District, defeating incumbent Dina Titus.

He serves on the Education and Workforce Committee and the Armed Services Committee where he is chairman of the Military Personnel Subcommittee.

Heck touts more than 35 years in public service as a physician, Army reservist, and community volunteer.

As a small business owner, he served as the president and medical director of Specialized Medical Operations, Inc., a corporation providing medical training, consulting and operational support to law enforcement, EMS and Military Special Operations.

Heck also represented Nevada State Senate District 5 from 2004 through 2008, serving on the Natural Resources, Human Resources and Education, and the Commerce and Labor committees, and as vice-chair of the Transportation and Homeland Security Committee.

“The campaign is going very well and we’ve been traveling around the state and we just covered four other stops over the last two days before ending up here in the Pahrump Valley,” he said. “It’s very exciting because every time we come into another town, we get built up by all the excitement that’s in the room.”