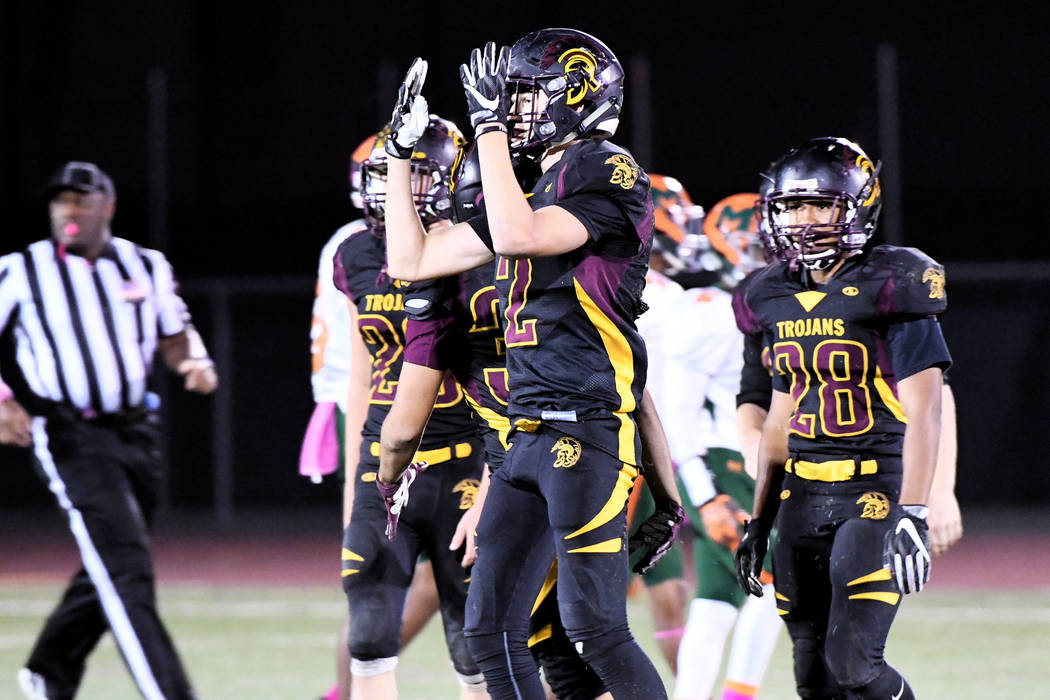 Peter Davis/ Special to the Pahrump Valley Times In the last game of the regular season, Cory Bergan gets his fourth interception of the night and raises four fingers. Bergan’s interceptions were instrumental in winning the game for the Trojans, which put them in the playoffs and gave the team a winning record. 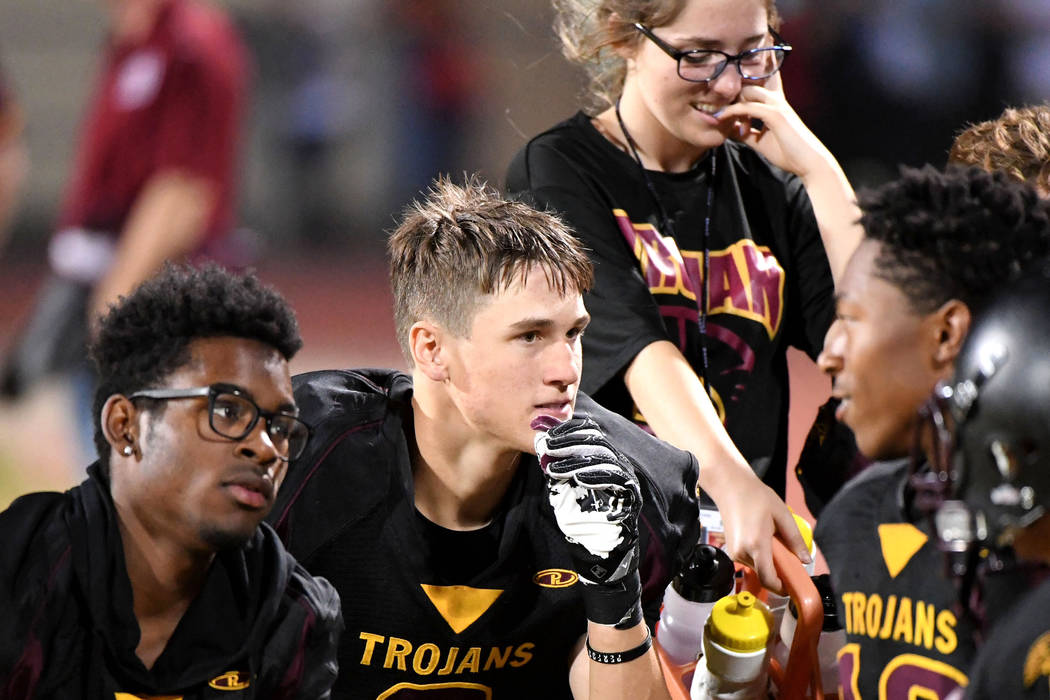 Peter Davis/Special to the Pahrump Valley Times Cory Bergan is known as the “heart” of the Trojans defense this year. He is seen taking a breather on the sideline against Western.

“Cory is an extremely hard worker and leads by example,” Clayton said. “For that, he is our defensive captain. He is well-rounded and has important responsibilities for us both as a tight end who blocks the edge and as a safety who anchors our defense over the top. His teammates look to him to lead the way.”

As a junior in the last regular season game against Mojave last season, the Trojans safety made other teams take note, garnering four interceptions in a single game, which was a career high for the now defensive team captain.

Bergan admits he has a skill for watching quarterbacks release the football. He seems to know how to read the quarterback and is able to anticipate where the ball is going to be on the field.

“I pay attention to the quarterback. When the play starts my eyes are on the QB,” Bergan said. “I watch the line to see what kind of play it is. In play recognition you have to stay disciplined, and if he picks a receiver that’s where you go.

“It’s tough, there is a lot that goes into it. A lot of players just stick to a receiver.”

Bergan has been playing football for seven years and this is definitely his favorite sport. He also enjoys playing basketball and has played hoops for five years.

“I like football better because I like the physicality of the game,” Bergan said. “I also like the fact it builds character and takes a lot of teamwork and a lot of hard work. If given the opportunity, I would like to play football in college. I like playing safety because it is the last line of defense that can stop and make big plays.”

He said the person that has made a huge difference in his game is former Trojans safety Devlin Dillon.

“When I was a sophomore, Devlin helped me out a lot,” he said. “He took the time to help me with footwork and told me what was best to do as a safety. He also taught me about tackling in the open field.”

According to Joe Clayton, the team spends a lot of time on open field tackling.

“We go over tackling in the open field a lot,” Bergan said. “Open field tackling is one of my strong points; last year I got good at it.”

This year, Bergan’s goal is to go after Desert Pines.

“I want to play Desert Pines again,” Bergan said. “Last year was a tough game and I want to show them they can’t push me around.”

He said the team will have a better chance this year as the size of the line has gotten bigger.

“Our line is getting better,” he said. “Our offensive line is one of the biggest we have had in years.”

He also said that the Trojans’ pass game has improved and we should see a better pass game under Dylan Coffman, who is excelling at quarterback.”

For Bergan, having good grades is important and he sports a 3.8 unweighted GPA and a 4.1 weighted.

He hopes to go into the medical field when he is done with high school.