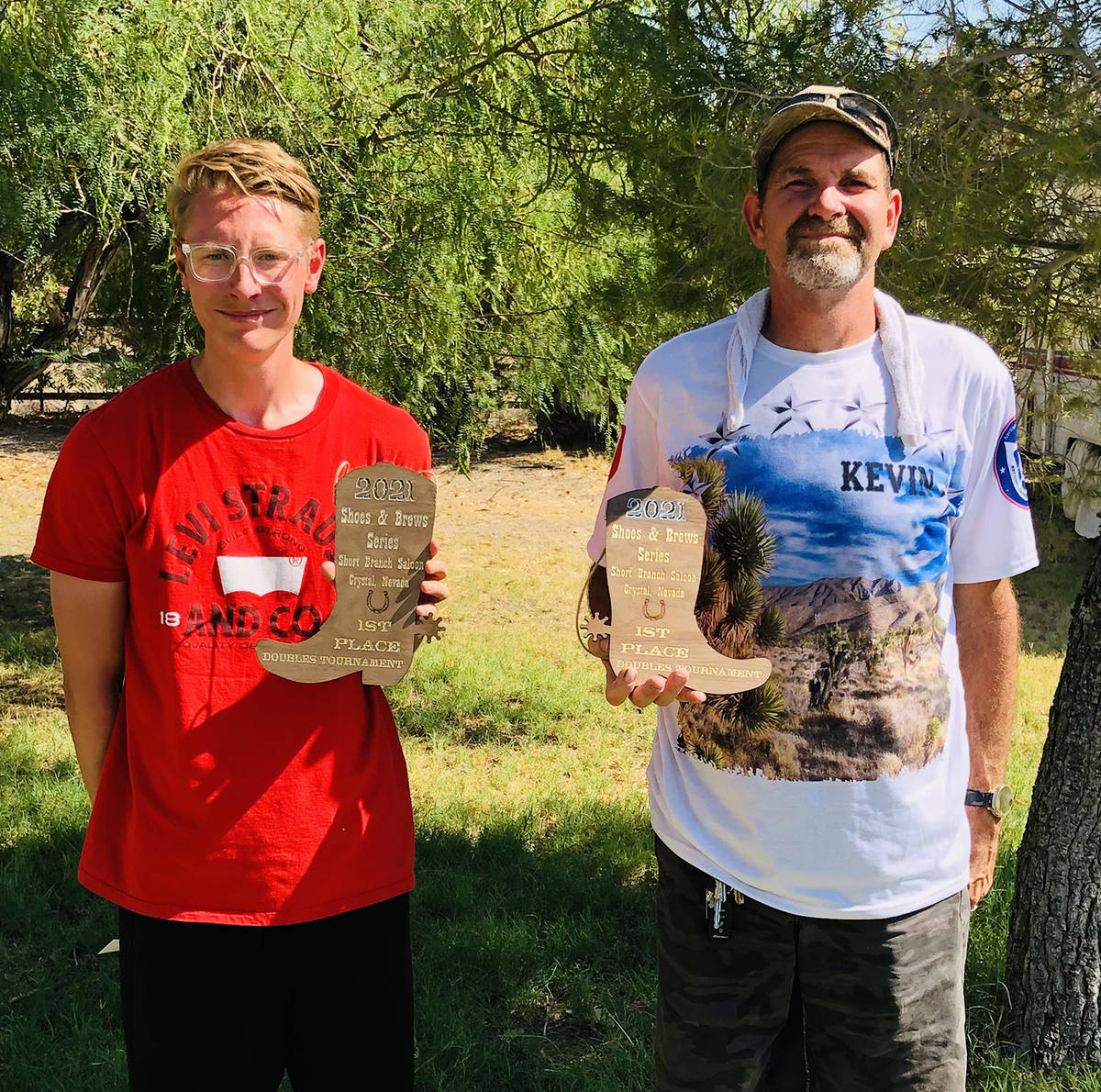 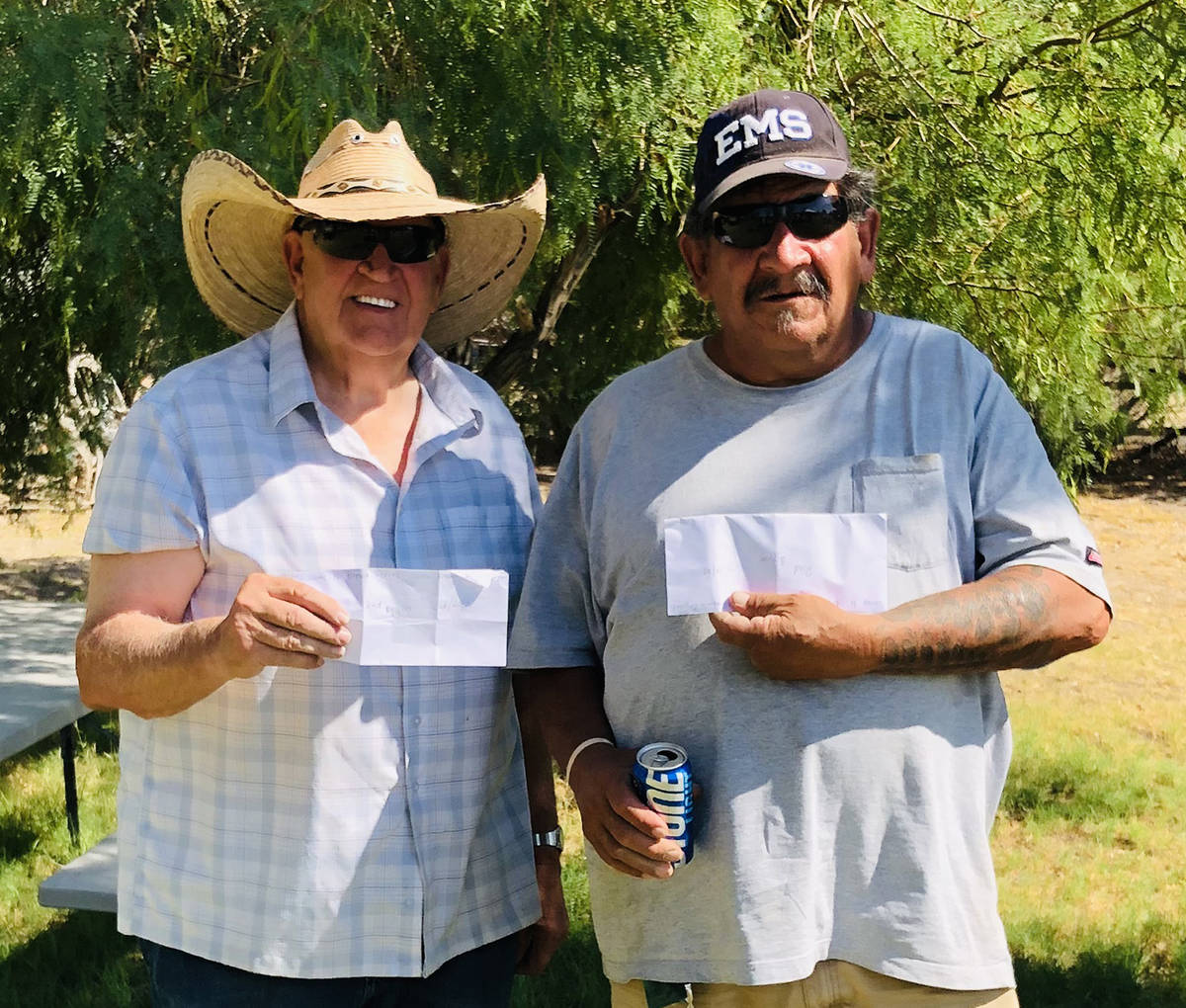 Lathan Dilger/Special to the Pahrump Valley Times Dennis Andersen, left, of Pahrump and Benny Sanchez of Amargosa Valley on June 20 with their winnings from finishing second at the Shoes 'N Brews Horseshoes Series tournament at Short Branch Saloon in Crystal. 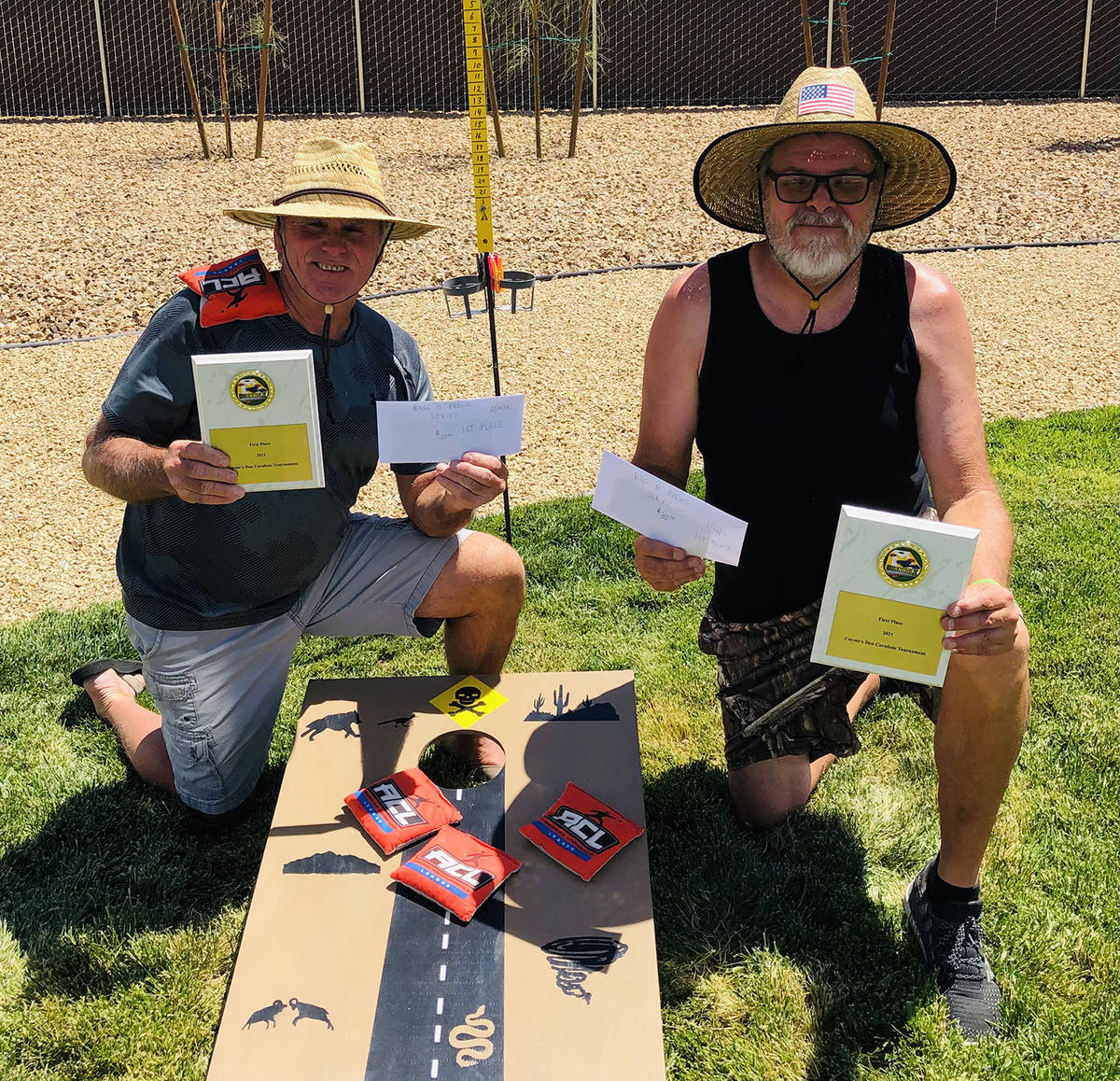 Special to the Pahrump Valley Times Mike Nicosia, left, and Lathan Dilger of Pahrump won the first event in the Bags 'N Brews Cornhole Series on Saturday at Coyote's Den in Pahrump. The team split $60 for winning the doubles tournament.

Kasey Dilger and Kevin Chael of Pahrump swept seven games to win the latest edition of the Shoes ‘N Brews horseshoes series June 20 at the Short Branch Saloon in Crystal.

Despite the heat, 16 players turned out for the doubles tournament, the final event before a summer break.

“We set up four shade covers, and there were lots of trees for shade,” said Lathan Dilger, president of the Nevada and Southern Nevada horseshoe pitching associations. “They also provided lunch for all the attendees, plenty of cold beers and some mean bloody marys. Despite the heat, everyone had a great time.”

Rare among recent horseshoes tournaments, no playoff was needed to determine the three money-winning teams. Kasey Dilger and Chael split $80 for winning with their 7-0 record, while Dennis Andersen of Pahrump and Benny Sanchez of Amargosa Valley went 6-1 to take second place and split $48. Their meeting in Round 5 of the tournament proved decisive for Dilger and Chael.

Vance Dilger of Mount Charleston and Mike Dedeic of Pahrump finished 5-2 and stood alone in third place, sharing $32 for their efforts. Steve Witherell of Pahrump won the 50/50 and pocketed $25.

The Shoes ‘N Brews Series now takes the summer off, resuming at 10 a.m. Sept. 19 at the Moose Lodge in Pahrump. The entry fee is $5. But horseshoes tournaments will fill the summer calendar until then.

The next SNHPA tournament will be the Fourth of July Extravaganza on Sunday at Petrack Park in Pahrump. The doubles tournament is open to anyone who signs up by 6 p.m. with an entry fee of $20. The tournament will take a break to watch the fireworks.

The next NHPA event — after a postponed tournament slated for last week, which now will be held at 6 p.m. Saturday at Petrack Park — will be the Shade Tree Open on July 10 at Petrack Park. Those who are not registered with the NHPA can be there at 8:30 a.m. to pitch 40 shoes to get their ringer percentage evaluated, then a $35 annual fee allows you to participate in all sanctioned horseshoes tournaments.

Lathan Dilger said he has been hopeful of getting a cornhole series started, and the first event in the new Bags ‘N Brews Cornhole Series took place Saturday at Coyote’s Den in Pahrump.

Unlike in horseshoes, there is no professional ranking system for cornhole players, so doubles teams are drawn by cards. The double round-robin format left the team of Lathan Dilger and Mike Nicosia tied with Mark Kaczmarek and George Longmire.

“I’d like to thank Sue and her staff for the good times at the Coyote’s Den,” Dilger said, adding that there will be a fall schedule and a points series similar to the Shoes ‘N Brews Horseshoes Series. Nicosia and Dilger opened the Bags ‘N Brews series with 10 points apiece, with five points apiece for Kaczmarek and Longmire.

But Dilger, who runs three horseshoes associations, is looking for some help in making the cornhole series a reality.

“I’d like to do some tournaments during events at Petrack Park,” he said. “I’m looking for a director to run things. The series will be just like the horseshoe series with points, cash prizes and plaques or trophies.”