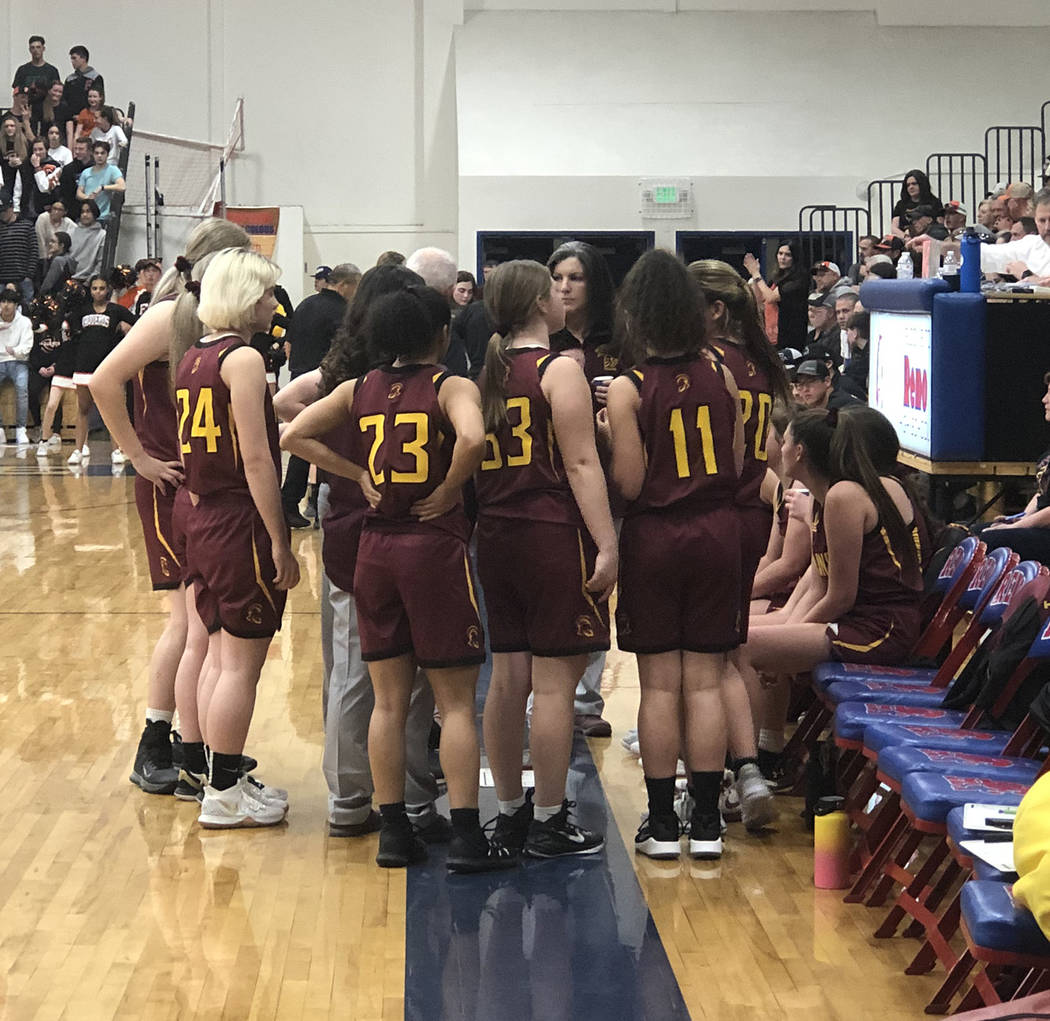 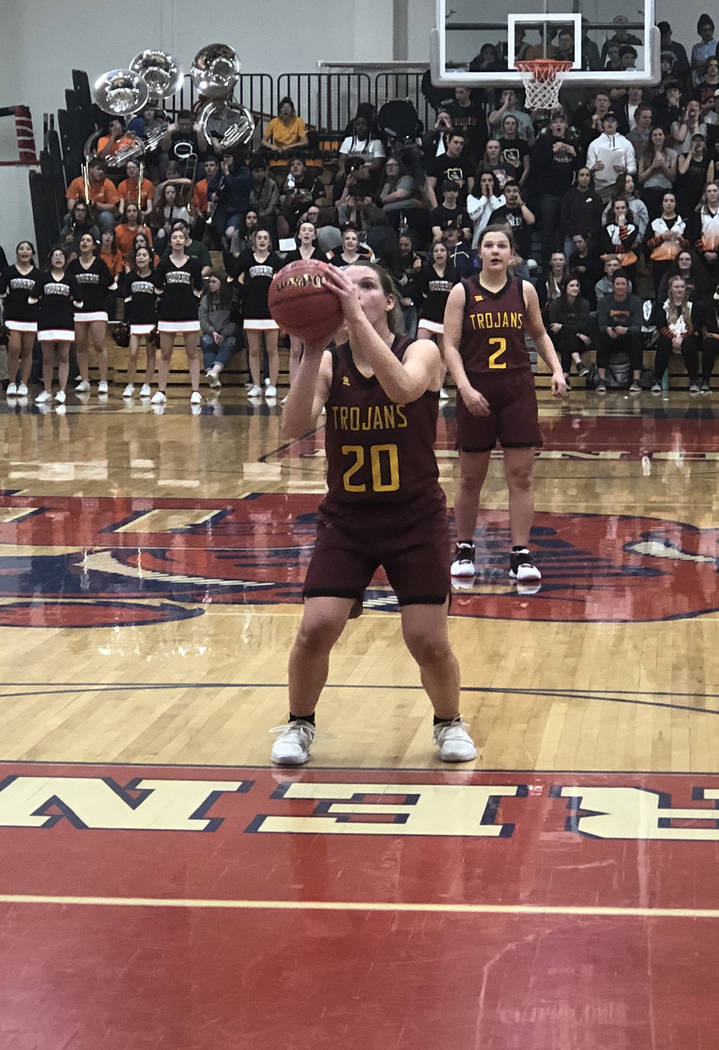 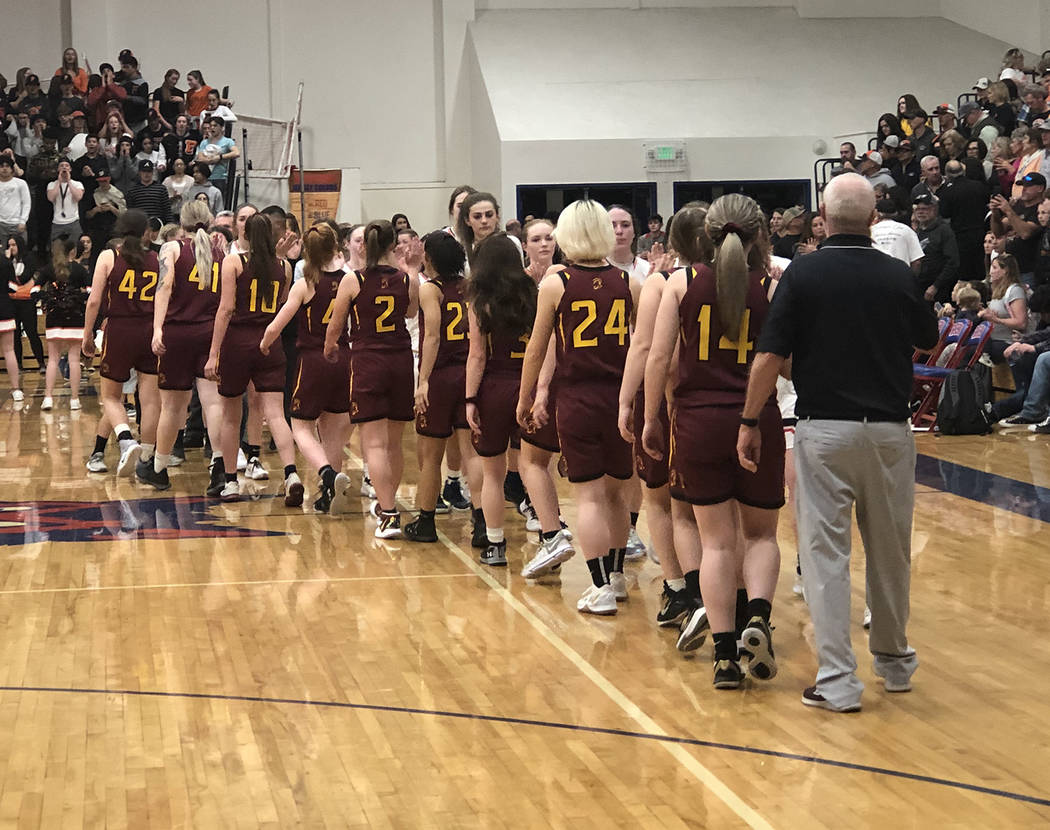 Saying that four times represents the four losses on the Pahrump Valley High School girls basketball team’s record this season, including the final one, a 57-51 setback against Fernley in the Class 3A State Tournament semifinals Thursday night at Reno High School.

“We’ve lost four games this year, and it’s completely due to our inability to score easy bunnies and free throws,” coach Bob Hopkins said. “If we made some free throws and layups, we could have just about won. But the kids played hard, and I love them.

“Had we played that hard a week ago we would have been regional champions.”

The teams not only played hard, but they played close. The Vaqueros held a one-point lead after one quarter and held the same one-point lead at halftime. But despite the narrow margin, the difference from the free throw line was stark.

“At halftime, they were 8 for 10 and we were 1 for 8,” Hopkins said. At one point during the game, the Vaqueros made nine consecutive free throws. Fernley attempted just one more free throw but made seven more, a telling statistic when the final margin was 6 points.

Both teams found a bit more of a scoring touch during the second half, and Hopkins said the Trojans changed things a bit looking for an edge.

“We just tried to run our offense,” he said. “First half we didn’t do much of what we wanted to do, and then second half we decided to run some triangles and some four corners and I guess we should have done that in the first half. And we got in foul trouble, and that hurt us.”

Makayla Gent and Kalea Whitney each fouled out for the Trojans, while Tayla Wombaker and Maddy Souza each picked up four fouls. Whitney provided one of the game’s top highlights for the Trojans, banking in a 3-pointer with 4:39 left in the second quarter to bring out a roar from Pahrump Valley fans. The shot was the middle basket of a 7-point run that gave the Trojans an 18-15 lead.

“Kalea Whitney came in and did an excellent job for us,” Hopkins said. “We finally got a bank-in 3 for us instead of against us.”

But two short stretches of the game were the difference for Fernley, which reeled off 8 consecutive points during the third quarter. The Trojans had taken leads of 29-27 and 31-29 on a layup by Tayla Wombaker and a 12-footer from Kate Daffer, and the Vaqueros responded.

Two of the four baskets during the one came off of steals — both teams spent much of the game forcing turnovers, often on consecutive possessions reminiscent of the Trojans’ regional final loss to Moapa Valley — as Fernley took a 37-31 lead with 1:55 left in the quarter. When Pahrump Valley pulled within a basket in the final minute, senior guard Katelyn Bunyard nailed a 3-pointer with 2 seconds left to give the Vaqueros a bit of momentum.

The Trojans didn’t fold, with Maddy Souza scoring the first 3 points of the fourth quarter on a free throw and a nice drive to the basket. But while they closed within 2 points twice, they could get no closer, setting up Fernley for the second decisive stretch of the half.

This time it was the work of Fernley freshman Alizah Lara, who gave the Vaqueros the breathing room neither team could seize before then. Lara nailed a corner 3-pointer at the 4:33 mark to put Fernley up five, and, after Pahrump Valley turned over the ball on a double dribble, she nailed another 3 from almost the same spot to give Fernley its biggest lead of the game, 50-42 with 3:38 to play.

The Trojans didn’t get closer than 4 points the rest of the way.

Although scoring was significantly higher than the Trojans’ previous game against Moapa Valley, there were similarities, especially in the chaotic, back-and-forth flow that dominated long stretches. Each team’s defense was proficient at forcing turnovers — the Trojans finished with 25, as five players each had at least 5 — and that prevented either from gaining momentum.

Souza and Nicky Velazquez scored 13 points apiece to lead the Trojans, with Daffer adding 10 and 9 rebounds. Velazquez added 7 rebounds — 4 on the offensive boards — while Souza grabbed 5. Souza and Wombaker each contributed 5 assists.

“Everybody that played did a good job for us,” Hopkins said. “It was a good game except for we were on the wrong end.”