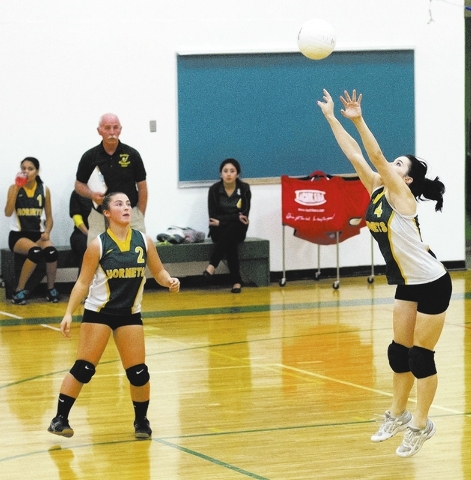 The Beatty Hornets were in action twice last week and came out of the two games with one win and one loss.

The Hornets beat Mountain View 3-0 on Wednesday winning 25-14, 25-20 and 28-26 in non-league action. Hornets Coach Dale Lerbakken was pleased with his team’s performance in that game.

“We played Mountain View and were very balanced. Every girl contributed to a total package of very good volleyball,” he said.

On Friday, the Hornets played Indian Springs in league play and lost 3-1. They drop to 10-9 overall and 3-3 in league and are in fifth place with two league games left to play against Sandy Valley and Adelson. Even with one loss the Hornets could manage to go to the playoffs.

“I really don’t know what to say about the Indian Springs game. I felt that we were the superior team as far as skills go, but things just did not happen for us. We came from behind in all four games, but only pulled out the first one beating them 26-24, thanks to Maggie’s and Nicole’s serves,” he said.

Lerbakken said his team came from behind in the other matches too, but just could not catch up.

“In game four Claudia really gave a great effort in her jump serve to come from behind 23-16 to get to 23 -22. She was the most consistent server after game one,” he explained.

According to Lerbakken the outstanding servers for the Mountain View game were Maggie, Ashley, and Christina and the team had great hitting from Lucero, Claudia, Anel, and Ashley.