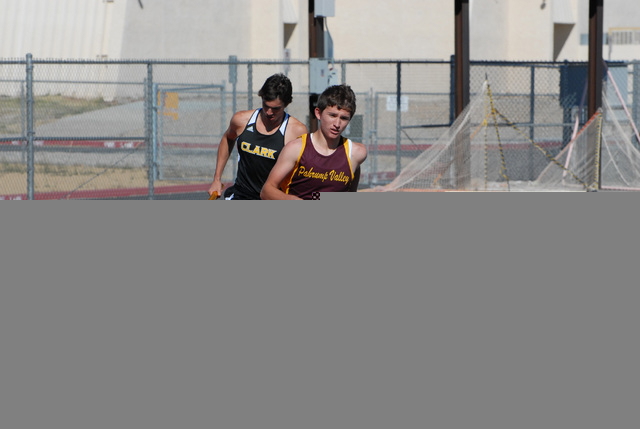 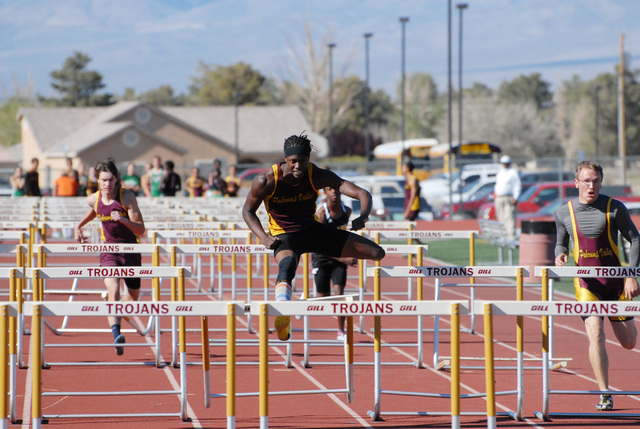 The Trojans boys track team is on the verge of capturing a division title. They just have to get through Western on Wednesday.

Eighteen teams were at the Meadows Invitational last Saturday with Centennial team taking first on both sides. The Pahrump Valley Trojan men’s team had a decent day too.

The meet was won on the boys side by Centennial with 201 points, Green Valley 155 points and Desert Oasis with 71 points. Pahrump took fourth place with 42 points in a tie with Basic.

For the boys in the 100-meter dash, Nico Cipollini finished 20th with a 11.90 time. This was a personal best for him.

Another promising sprinter for Pahrump is Dylan Montgomery, who was the fastest for the Trojans in the 200-meter run with a 24. 50 and a 23rd finish. He is only a freshman.

Devon Montgomery scored points for the team by taking a tough 3rd place in the 400-meter run with a 50.66 time.

Trojans Coach Ed Kirkwood said Montgomery is in the top three in Division I-A in the 400 and has a shot at being state champion in the 400 and the 110- meter hurdles, which he took last year at state.

“The 400 comes down to what event you have run before this event,” he said. “He will probably qualify for state in more than one event.”

Nick Nelson scored points by finishing 9th place in the 800-meter run with a 2:08.11 finish. This is one of the toughest races in the sport and Nelson could be a contender too if he can run near the 2-minute mark.

Kirkwood was pleased with his vaulters and jumpers too. Jacob Stearns finished in 4th place and Nico Cipollini finished in 5th place, with both getting 11-00 feet.

Kirkwood said his jumper Isaac Davis is doing really well for a sophomore. Davis finished 5th with a 5-8 jump and Devlin Dillon’s 5-4 height came in for some points for 9th place.

“Davis is right on the bubble in the high, the long and the triple. He is hanging in the 4th, 5th, 6th position. He is close to jumping 6-00 in the high and once he does that he will be one of the top jumpers in the state. He jumps 5-10 in practice all the time. He is pretty consistent at that height,” Kirkwood said.

The coach said he took 30 athletes to the meet and not the whole team because of the Nye County spring break. A good break for the Trojans is they got Keenan Harris back for the regional meet. Harris was the top sprinter coming into the season prior to him pulling a hamstring.

“Considering there were some good schools like Centennial at the meet we did pretty good,” he said.

On the girl’s side the Centennial girls scored 194 and the Pahrump girls mustered 12 points for 13th place.

Kelbie Middleton was sick all last week and she usually is good for 30 points for the team. Kirkwood is confident she should bounce back this week against Western.

“She is right there for state champion in the 200-meter,” he said. “She feels she can take Maxey from Faith in the 200. There is another girl too for Western that Kelbie will be going up against this Wednesday, Kasia Lawryonwicz. She is just ahead of Kelbie in the 100 and just behind Kelbie in the 200.”

Of course, Sydney Sladek has a time of 2:25 in the open 800-meter run. Kirkwood knows she can do better than that.

“This 2:25 is just a walk in the park for her. She can run faster and will, now that she is healthy,” Kirkwood said.

Sladek will be a contender to repeat as the 800-meter champion this year.

At Meadows Meghan McDermott had a good showing in the jump events. She was 5th in the long jump with a 15-00 and 4th in the triple jump with a 31-02.25. McDermott should do well against Western in the 100-meter hurdles.

Mikayla Davis didn’t have a great jump at Meadows (4-04), but should be there by regionals.

The Trojans have two more meets. They are going to Boulder to run against Western and then the following meet will be at Boulder too for the small schools meet on May 9.