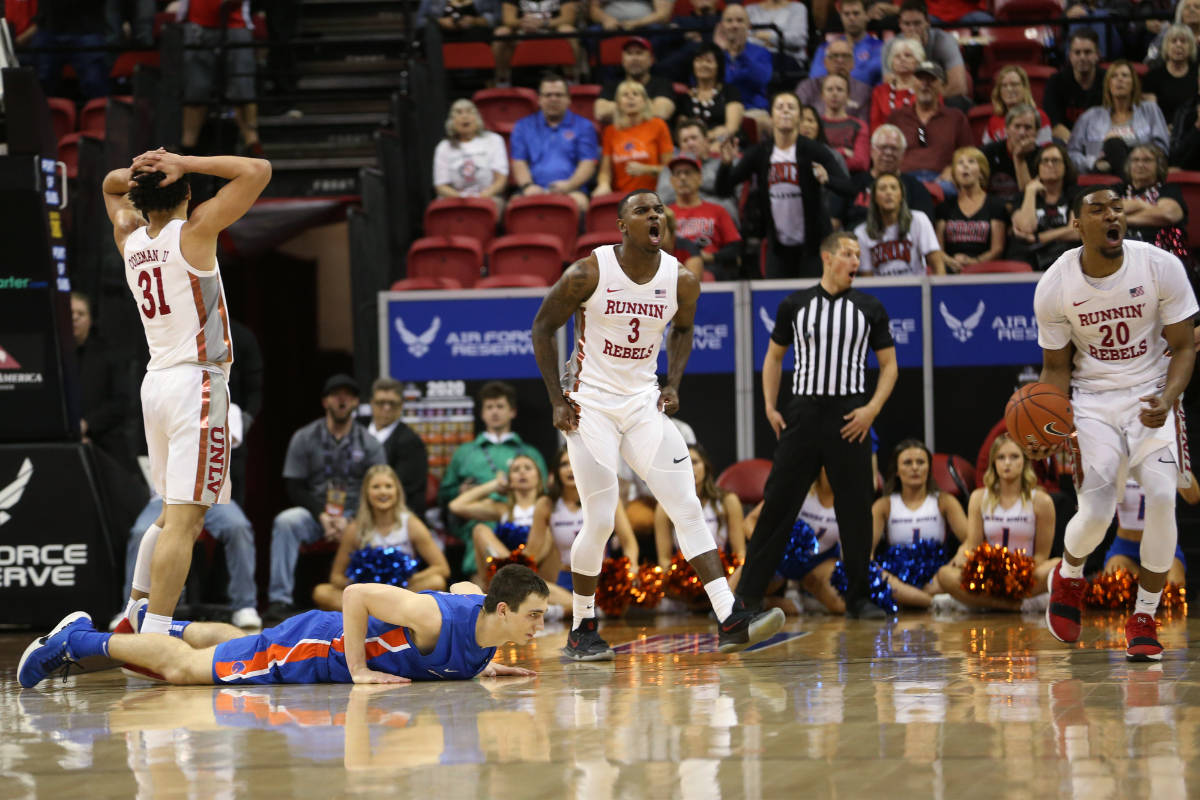 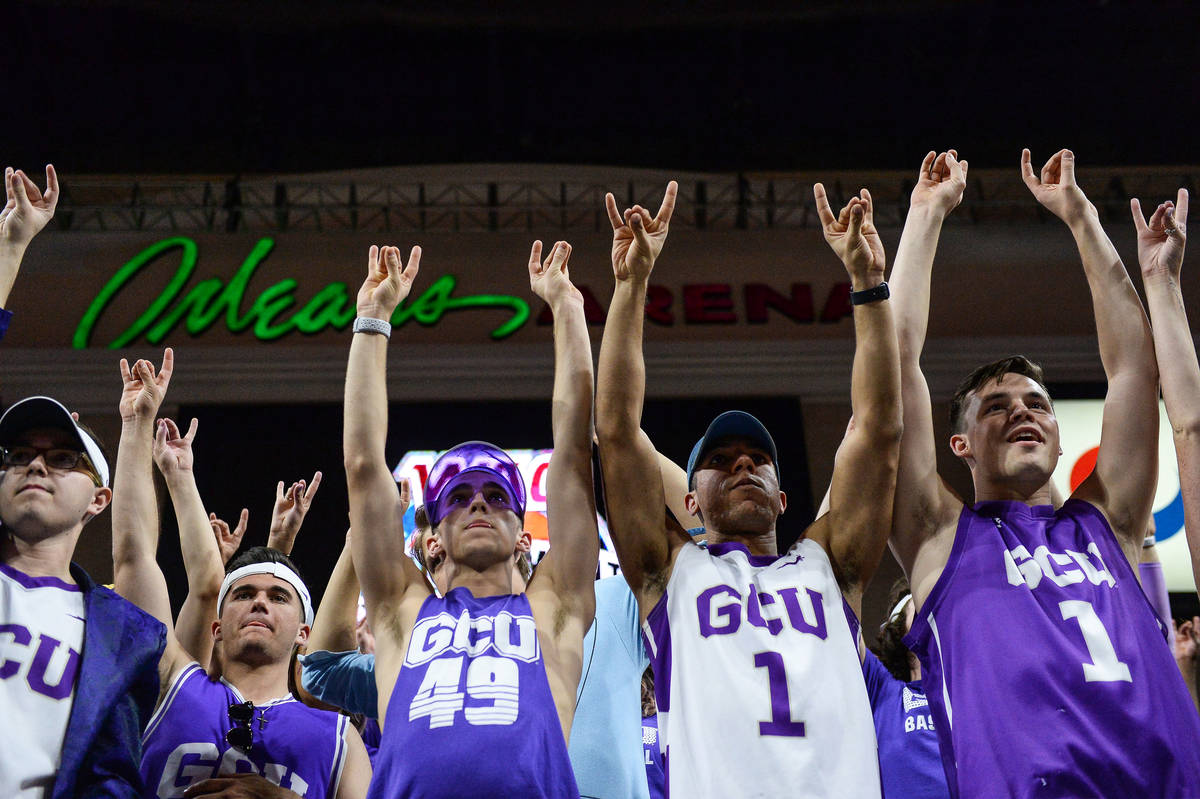 Fans in the Grand Canyon University student section "put their lopes up" to cheer on their team in the second half of the opening round of the Western Athletic Conference tournament against Seattle University in Las Vegas, Thursday, March 14, 2019. (Caroline Brehman/Las Vegas Review-Journal) @carolinebrehman 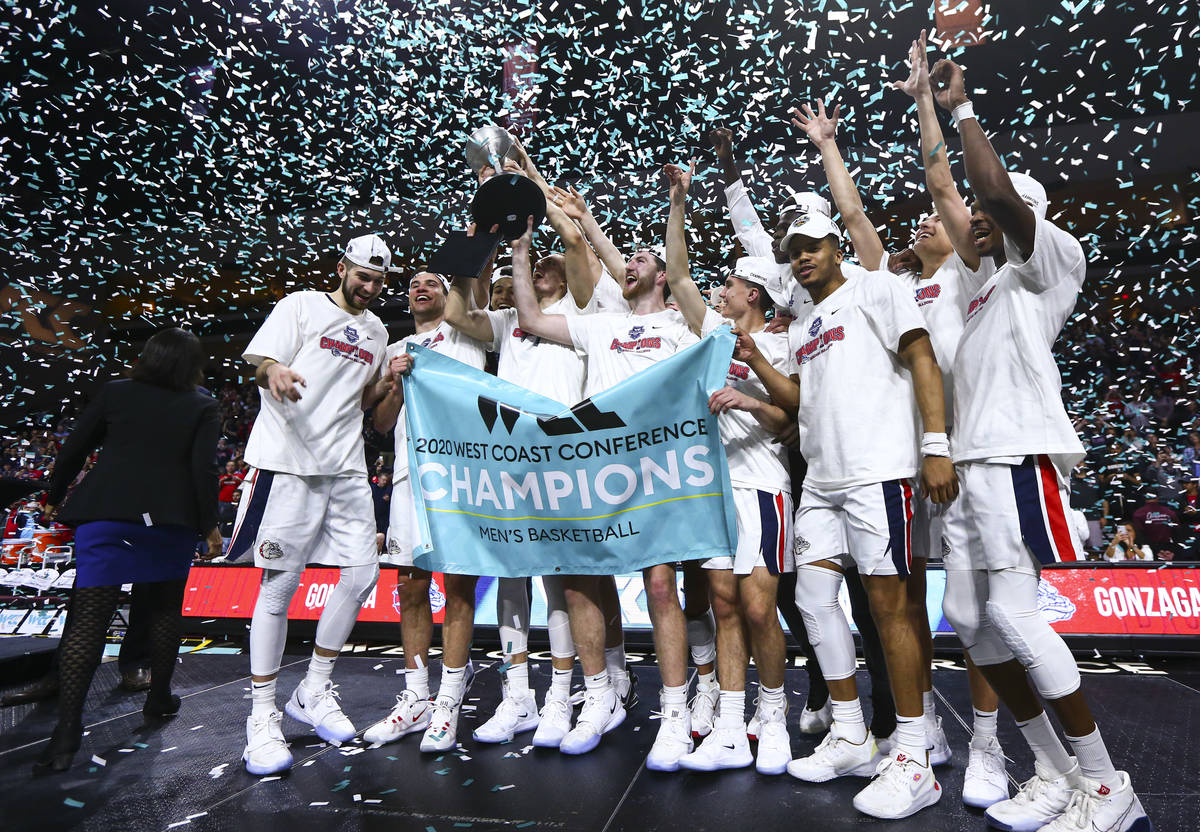 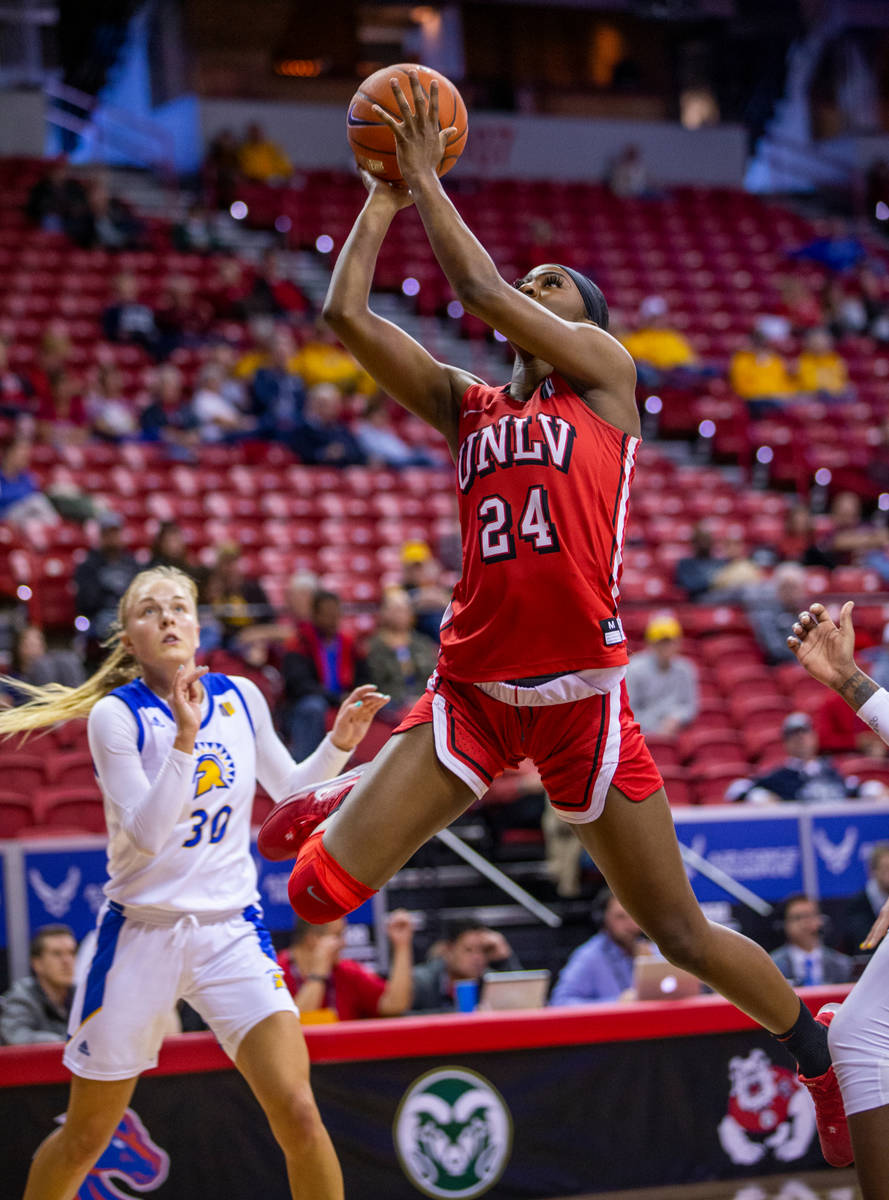 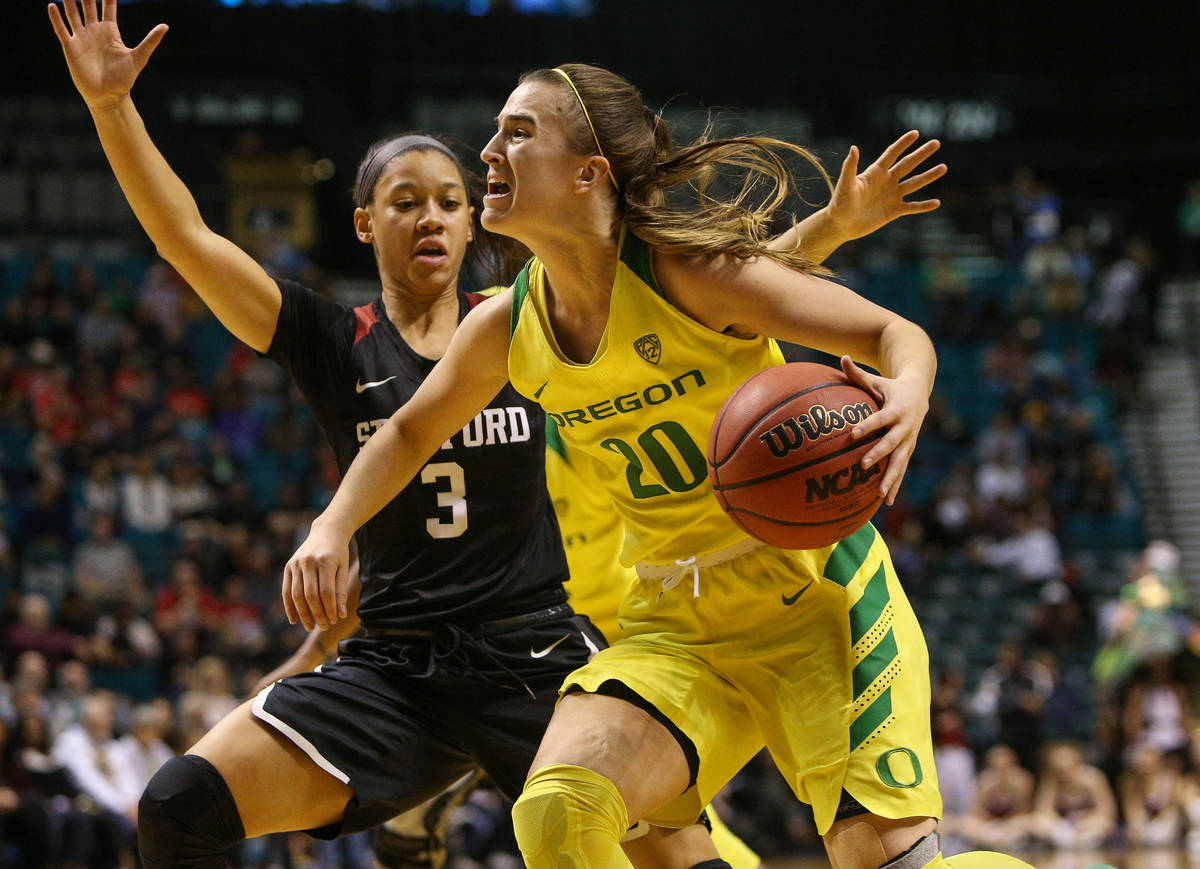 Oregon Ducks guard Sabrina Ionescu (20) looks to pass the ball while being guarded by Stanford Cardinal guard Anna Wilson (3) during the second half of an NCAA college basketball game at the Pac-12 women's tournament at the MGM Grand Garden Arena in Las Vegas, Sunday, March 10, 2019. (Caroline Brehman/Las Vegas Review-Journal) @carolinebrehman 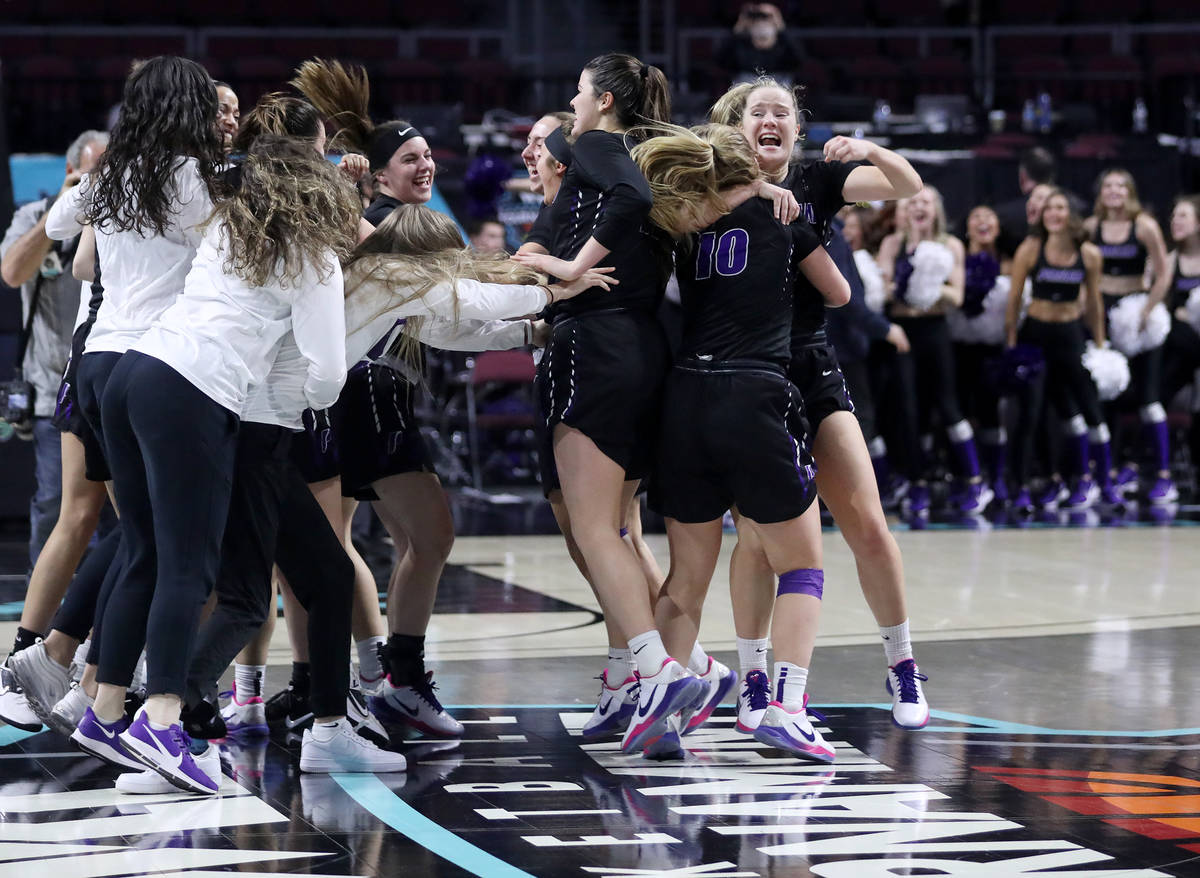 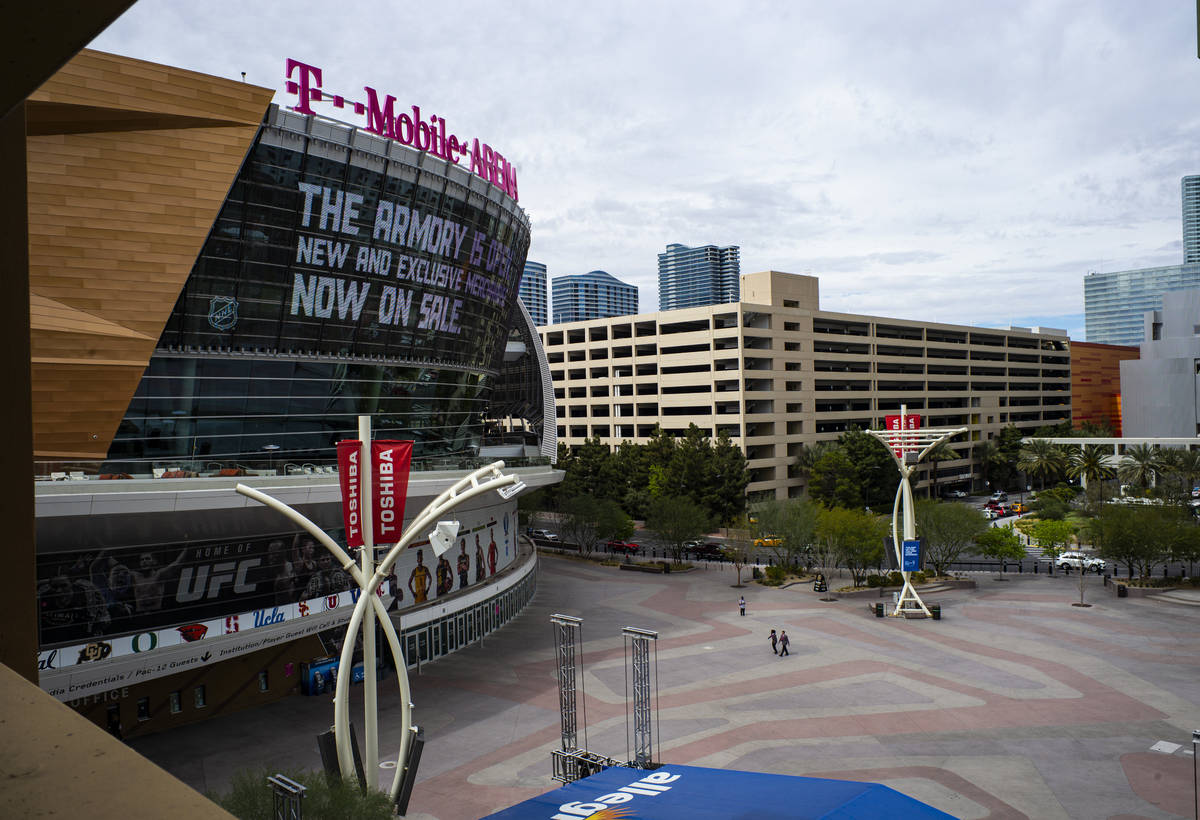 Chase Stevens/Special to the Pahrump Valley Times A near-empty Toshiba Plaza and T-Mobile Arena after the Pac-12 men's and women's basketball tournaments were canceled March 12, 2020 in Las Vegas.

Little has been certain in the sports world since the COVID-19 pandemic caused the cancellation of games last March, so no one is assuming the five conference basketball tournaments in Las Vegas will be played as scheduled this March.

But all five conferences are moving forward as if those tournaments will take place. Officials from each league stay in weekly contact to keep open communications lines and establish similar protocols.

“Rather than compete against each other, we’re trying to work collaboratively to make sure we’re going to successfully complete tournaments in Las Vegas,” Big West Conference Commissioner Dan Butterly said.

Four of the five conferences responded to a series of questions from the Las Vegas Review-Journal, and none indicated any tournaments would be canceled.

Only the West Conference Conference didn’t respond despite repeated attempts, but it appears the uncertainty is more about whether top-ranked Gonzaga will show up in Las Vegas. Bulldogs coach Mark Few said after a Jan. 23 victory over Pacific that he wasn’t sure what was the right step to take.

“We need to do what’s best for the WCC, which the best thing you could possibly do for the WCC is accrue as many NCAA (Tournament) shares as possible,” Few said. “That’s what pays for everybody’s bills in the WCC. At the end of the day, I think it needs to be based on that.”

“Hopefully, as we progress through the league, we’ll get a better feel for what’s the best way to execute that,” Few said. “Is it to try to get a third team in, or is to protect the two teams that are already in? And along with that, there’s still some TV contracts. There’s a lot of things going on.”

No other conferences have indicated any teams will opt out of the upcoming tournaments. A Western Athletic Conference spokesman even made the point that only the WAC men’s and women’s tournament champions will qualify for the NCAA tournaments.

The Pac-12 and Mountain West men’s tournaments could get away with having their top teams sit out. Colorado and Southern California are Pac-12 teams that appear safely in, as is San Diego State from the Mountain West.

Four Pac-12 women’s teams are locks for the NCAAs.

“We are looking forward to returning to Las Vegas for our Pac-12 men’s and women’s basketball tournaments,” Commissioner Larry Scott said.

The Big West was scheduled to play at the Honda Center in Anaheim, California, but that city let the conference move the tournament to Las Vegas because of California’s strict COVID policies regarding sports. The conference’s contract with Anaheim is through 2022, so Las Vegas could become a more permanent home to the Big West tournaments.

Butterly certainly is familiar with Las Vegas. Before becoming commissioner June 1, he spent 21 years at the Mountain West.

“I think somebody called me the godfather of tournaments in Las Vegas,” Butterly said with a laugh.

Butterly said the players would have separate entrances and team-specific meeting spaces to go to for daily testing. The other conferences are taking similar steps.

“Our testing protocols are higher than what the NCAA has been recommending,” Butterly said. “We’re doing well. We’ve gone from 44% of our first two weeks of games being completed in men’s and women’s basketball to 100% a couple of weeks ago. We’re taking a conservative approach. We’re doing what we’ve got to do, but I do like the (COVID) trend is improving.”

So the outlook is all five tournaments will take place next month, even if it isn’t a typical March in Las Vegas. No decisions have been made on whether fans will be allowed to attend.

He added the conference is working with UNLV and the Thomas &Mack Center to follow governmental health guidelines. He also highlighted the work with the other conferences.

“We all share the same goal of providing a quality championship experience for our student-athletes and a celebration of our conferences while ensuring as safe an environment as possible for everyone involved,” Thompson said.