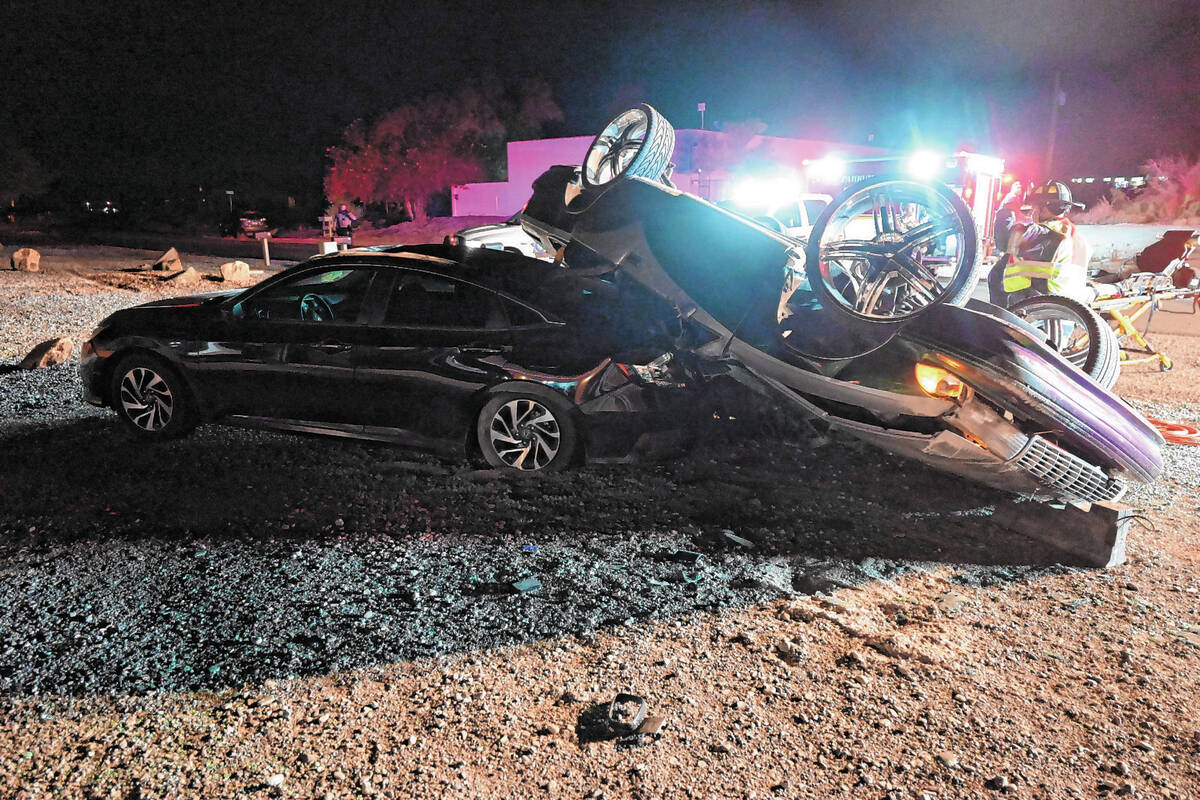 Special to the Pahrump Valley Times “One car was on top of another parked car and the car was resting on its passenger side. Crews arrived on location and completed scene size-up and confirmed the accident as described,” Pahrump Fire and Rescue Chief Scott Lewis said, following a fatal crash on Sunday, Sept. 11. Despite a slight decrease in traffic fatalities statewide, Southern Nevada is on an upward trajectory. Fatal crashes in Nye County are down 72 percent compared to last year, according to new data from the state transportation department.

Despite a slight decrease in traffic fatalities statewide, Southern Nevada is on an upward trajectory.

Through August, there have been 242 traffic-related fatalities in Nevada, a 3 percent decrease over the first eight months of 2021.

“That (decrease) is good news,” said Nevada Department of Transportation Director Kristina Swallow. “But just a reminder, last year was the worst year we’ve seen in 16 years. So, we’re hoping to continue to see a decrease.”

Traffic deaths were down in most rural areas in the state, notably Nye County, where the five fatalities seen through August were 72 percent lower than the 18 deaths during the same time span last year.

The data did not include the most recent death on Nye County roads.

One person was killed following a two-vehicle crash just after 10 p.m., on Sunday, Sept. 11 along Bourbon Street just west of Pahrump Valley Boulevard. The victim of the crash has not been identified.

Hoping to combat the amount of crashes on local roads, NDOT is looking to partner with local agencies to increase safety on local roads.

“Help them figure out the best strategies to address the crashes on their network,” Swallow said.

The data is being reviewed from that pilot program, which will help the agency develop a long-term program that can be implemented in other counties.

The Regional Transportation Commission has endorsed the process and Swallow hopes to partner with it to implement a program in Clark County.

Fatal crashes in Clark County accounted for 157 of the state’s total, a mark that was 11 percent above what the area saw through August of last year.

“Across Nevada the rate of fatalities have gone down in many counties, although some are still above where they were last year, including Carson, Lander, Pershing and Clark,” Swallow said.

Bicyclist deaths were up 125 percent in Clark County this year compared with 2021, rising to nine from four, while motorcyclist fatalities rose 6 percent, to 33 from 31.

Impairment and speeding continued to be the leading causes of fatal accidents on Nevada roads.

Automobile crashes as a whole in Nevada occur slightly more frequently on local roads than on state maintained roads such as highways or freeways.