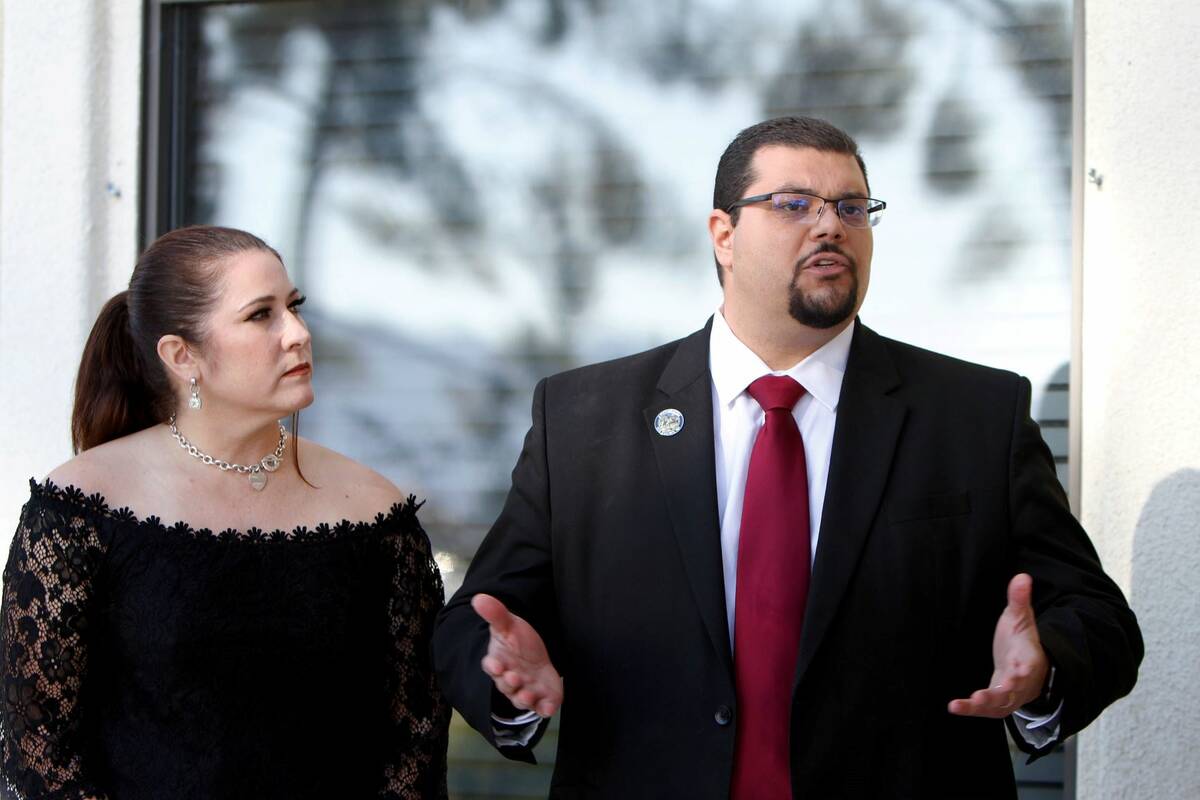 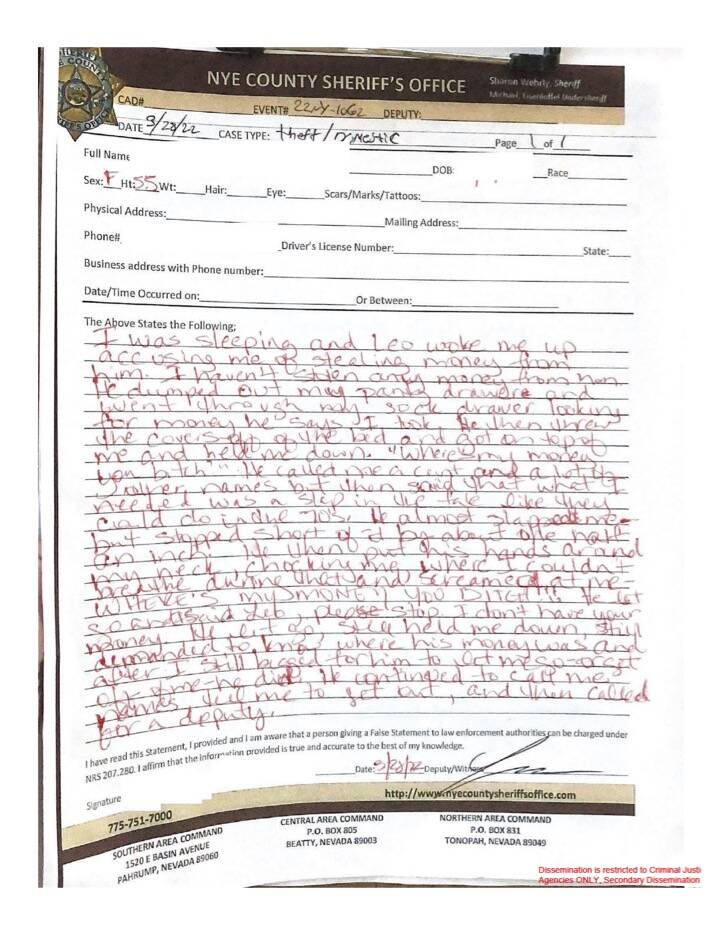 TIMELINE OF EVENTS: -March 28: Leo Blundo calls 911 to report that $77,000 is missing from his property. -April 11: The Nye County Sheriff’s Office submits a report to the Nye County District Attorney’s Office alleging that Blundo committed domestic battery against his wife. The DA declines to investigate, citing a conflict of interest because he serves as legal counsel to the Nye County Commission and it would be a conflict of interest. -April 27: The Esmeralda County District Attorney’s Office agrees to review allegations of possible criminal conduct against Blundo. -May 20: Nye County Sheriff’s Office releases body camera footage of deputies’ response at the Blundos’ residence. Shown in photo: a redacted deputy report where Melissa Blundo describes the incident to the Nye County Sheriff's Office.

Newly released footage captured by a Nye County Sheriff deputy’s body camera provides insight into what happened after officers arrived at the home of District 4 County Commissioner Leo Blundo following a high-profile altercation there between his wife, Melissa Blundo, earlier this spring.

The footage, which was released, edited and uploaded to YouTube last week by political activist group Nye Corruption, shows a visibly upset commissioner calling his wife expletives and blaming her for thousands in cash that allegedly went missing from their home.

The incident has become political fodder in a heated primary campaign season where the Republican commissioner is running for re-election against two GOP challengers.

Leo Blundo blamed a political opponent and local law enforcement, and says they’re trying to ruin his chance to retain his seat.

“My primary opponent is colluding with leadership of the sheriff’s department,” Leo Blundo told the Pahrump Valley Times on Thursday.

He said it was “irresponsible, a liability and flat-out wrong” for the Nye County Sheriff’s Office to release unredacted footage of a civil matter.

“It’s unfortunate that NCSO is weaponizing the badge, as a citizen and constituent of Nye County,” Leo Blundo said in an interview Thursday at his Pahrump business with his wife, Melissa. “I have a right to call 911 when I need public-safety services. It’s a civil matter between me and my wife. I’m happy to inform you that we’re doing just fine — she’s sitting here right next to me.”

Blundo’s opponent, Ron Boskovich, responded to the accusation on Friday.

“That is absolutely untrue,” he said. “This is an accusation coming from a desperate man who knows he’s losing the race, who views facts as the enemy.”

The sheriff’s office has not commented on the matter.

On March 28, Leo Blundo called 911 to report that $77,000 had gone missing from his property in Pahrump — including $50,000 from his safe inside his home, $25,000 from his truck parked outside and $2,000 in a “little purse” that he owns. The commmissioner also reported that a Glock 17 went missing from a secure location on his property that same afternoon.

Audio captured by the responding deputy’s body camera that day details the tense conversation between Leo Blundo and law enforcement.

“Number one, you guys are NCSO — I already had really hard trust issues with that organization with the way you guys function,” Blundo can be heard telling the deputy in the footage. “…so it’s already very difficult to call you guys.”

The commissioner blamed his wife for the theft, according to deputy’s footage, and told authorities that she had been drinking the night prior. When a deputy tried to confirm that the missing money was “cash,” Blundo sarcastically responded: “No, it was chocolate kisses.”

Blundo explained to deputies that the cash was from Carmelo’s Bistro, the Italian restaurant he runs in town.

The business generates less than $370,000 in annual sales, according to the commercial data analytics firm Dun & Bradstreet Corp.

Deputies examined the safe where Leo Blundo indicated the money had been stored, but reportedly found no damage.

Melissa Blundo told deputies she had no knowledge of the cash’s disappearance, adding that she does not even share a bank account with her husband. She additionally told deputies that Leo Blundo “always” leaves cash in his truck and recalled that $8,000 had been stolen in the past but was never reported.

Although deputies were responding to reports of a theft on March 28, body camerage footage shows Nye County deputies also questioned Melissa Blundo and asked if her husband had become physical during their argument about the missing cash.

Melissa Blundo initially denied that her husband had touched her, according to video captured by deputies. Later she said that Leo Blundo had “got on top of her” and held her by her throat while screaming, “‘Where’s my money you bitch?”

Melissa Blundo told the deputy that her husband used enough force to prevent her from breathing, according to deputy footage, but said she did not want her husband to get in trouble.

Deputies noted there were no marks or redness on her neck that was consistent with her account.