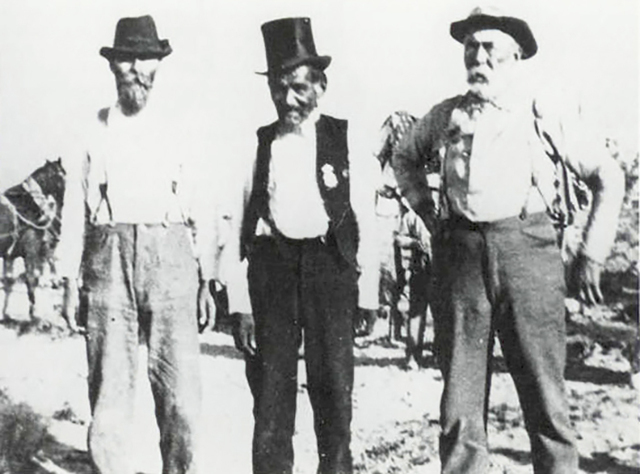 The famous Southern Paiute Chief Tecopa, center, with two area ranchers, circa 1900. Tecopa is said to have obtained his top hat and bandmaster uniform in exchange for showing a Death Valley area mining man the location of a gold mine. Courtesy of the University of Nevada, Las Vegas-Dickinson Library Special Collections

Editor’s Note: This is the third article of a four-part series on the first inhabitants of the Pahrump Valley. The first articles ran July 22 and Aug. 5.

From almost the outset of contact between whites and Southern Paiutes, beginning in the late 1700s, relations were often troubled. Over the decades, whites killed natives and took them as slaves, more and more assuming control of the best land and water resources. The natives, of course, defended themselves as best they could.

These were difficult times for the Southern Paiute. One of the most important events in Southern Paiute history was the negotiation of a peace treaty in the late 1860s spurred on through the actions of an amazing man of the West, Captain John Moss. The treaty, it was later reported, “was not made on the basis of Christianity, love, fear, or the promise of reward, but upon a conviction of true justice.”

In the course of his actions, Captain Moss appointed a Southern Paiute named Tom as chief, although it is unclear why the native community accepted this appointment made by a white man. When Tom died, he was succeeded by his younger brother, Tecopa. In the years thereafter, Tecopa was said to have acted in “good faith” for the tribe and was extremely grateful to Captain Moss for his peace-making efforts, holding him in the highest possible esteem. Tecopa is reported to have gone so far as to furnish General George Crook with warriors to assist in subduing the Apache in Arizona.

Once the treaty was completed, Captain Moss departed the region, but “promised to return and see those who had learned to love him.” Moss went to Colorado, founded a mining community in the San Juan Mountains, married, and subsequently died. Many years later, news of Captain Moss’s death reached Chief Tecopa, who was by then an old man in poor health. Tecopa was profoundly saddened by the news and sent runners “far and near,” inviting Indians and a few whites to attend a huge ceremony, a “sacrifice or burnt offering” (likely a Cry) to take place at Tecopa’s headquarters in Pahrump Valley near the Pahrump Ranch.

The great ceremony honoring Captain John Moss began Aug. 7, 1893. That afternoon Chief Tecopa made a long speech reviewing important events during his reign and calling attention to “principles and laws established by Moss” that had enabled the Southern Paiutes and the white men to live in peace and harmony. It was reported that Tecopa pleaded with fathers and mothers to teach their small children the name of Moss and that word of his good deeds be handed down from generation to generation.

This event continued for five days, featuring socializing, feasting, singing, dancing, gambling, playing all sorts of games, and children romping and playing. On the last day, a huge fire was lit and valuable articles placed on the “spiritual flames” to burn, including blankets, buckskin, and clothing. Animals were led up to the fire, then shot and roasted and burned in it. A great feast was held, after which the guests departed for their homes.

As a part of the Nye County Town History Project, a Nye County-sponsored effort to preserve county history, over the years I have conducted more than a dozen formal oral histories with local Southern Paiutes. Copies are available at all Nye County libraries and the Pahrump Valley Museum and on the Internet at nyecountyhistory.com and PahrumpValleyMuseum.org. They provide valuable information on the lives of Southern Paiutes living in the area in the twentieth century.

Additionally, I recently had the opportunity to interview two long-time Pahrump-area Southern Paiute residents as part of the Pahrump Valley Museum’s effort to develop a display on Pahrump Valley Native Americans.

George Ross, whom I first interviewed in 2010, was born the day after Christmas in 1924 at Shoshone, California. George’s mother was born on the Manse Ranch. His family was poor and his mother took in laundry and sewed to help make ends meet. George recalled it was “pretty rough” growing up. The possession of a battery-operated radio by someone in Shoshone at that time was a big deal. He said they listened to a radio station out of Del Rio, Texas (I listened to the same station when I was a kid in Colorado). People didn’t travel much. A trip to Pahrump from Shoshone could take two days by wagon. Money was scarce in the 1930s, Ross recalled.

In 1944, during World War II, Ross was drafted into the Army and served in Europe. He said he saw only one spot there that looked like desert, and it reminded him of home. George said his mother told him that when they saw the first Model T automobile, “they couldn’t figure out what it was.” When asked if he gets to Las Vegas much these days, he replied, “No, not if I can help it.”

Helen Tom was also born in Shoshone, California, but in 1934. When she was four years old her mother passed away. Helen was placed with foster parents in Hawthorne, Nevada, and lived with them for many years. From there she lived and studied at the Stewart Indian School southeast of Carson City from which she graduated. She went on to attend Haskell College in Kansas for a year. She returned to Nevada, then married and moved to Shoshone and Tecopa, where she raised her children. Helen’s mother had been good friends with her husband’s mother.

When a Southern Paiute dies, the community holds what is called a Cry Dance. It can last through the day and all night. In the early morning the body is taken to its grave. The clothing and personal effects of the deceased are burned, after which the spirit goes to the spirit world.

Helen said it was traditional in earlier times to carry a dying person’s bed outdoors so as the end approaches “his spirit may pass under the open sky.” It is customary not to say the name of the deceased aloud, and Helen said she was once reprimanded for doing so. She is not sure Cry Dances are still held. The people, she says, are “getting away from the old traditions.”

Helen’s memories of her mother are few since she was so young when she lost her, “but I do remember coming home from a hard day of play,” she said. “I crawled up on my mother’s lap and she gave me a hug and said, ‘inuchini nigenis,’ meaning ‘my sweet girl.’”