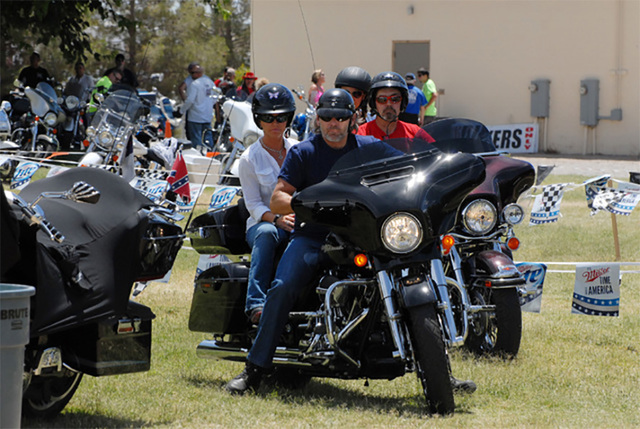 Area bikers are invited to take part in Saturday’s poker run to benefit the family of a woman killed by an alleged drunk driver. The run will kick off at the HUBB Bar and Grill on West Bell Vista at 9 a.m. The final leg will end at Vince Neil’s Tatuado Bar and Grill. All proceeds will go directly to the family of Christine Weir. Special to Pahrump Valley Times

Friends and associates of the Pahrump woman killed at the hands of a suspected drunk driver have scheduled a benefit poker run on Saturday morning.

Christine Weir, 33, lost her life in the early morning hours of Sept 24.

The poker run is scheduled to begin 9 a.m., Saturday, Oct. 22, at the HUBB Bar and Grill on West Bell Vista Avenue.

Additional stops include the Stage Stop Casino, on Stage Coach Road, along with the Bounty Hunter Saloon at 680 East Street and the Painted Lady Saloon at 1330 5th Street.

Sandra Hancock, manager of the Wild Side Tavern said funds raised from the poker run will go directly to the family of Weir.

“So far we’ve generated a lot of donations for the poker run,” she said. “We went around town and many businesses have given us different things to raffle off. We will have lots of food, like pulled pork sandwiches, chicken, salads and side dishes there, as well as a DJ, and a 50/50 raffle. I donated the food and music, and whatever we get from the food goes to the family.”

Additionally, Hancock said the poker run is $20 per motorcycle and $5 for the motorcycle passenger.

Cars are also welcome to participate.

“You could also make the run in a car, which is $20 per car and $5 per passenger in that car,” Hancock said. “That will include the food at the end of the poker run. I understand the temperature is going to be in the 80’s on Saturday, so it’s going to be a very beautiful day to ride.”

The District Attorney’s office charged Ashley Winn, 22, with driving under the influence of intoxicating liquor, thereby causing the death of another, a category B felony. Winn faces two to 20 years in prison and/or a $2,000 to $5,000 fine for the alleged crash.

According to the Nevada Highway Patrol’s arrest report, Winn admitted to drinking whiskey up to an hour before the crash.

She was a passenger in a car driven by her fiancée Brian Choiniere, 33, who was critically injured in the broadside collision at the intersection of Dandelion and Honeysuckle streets.

Weir, a receiving clerk, was on her way to work her shift at the Walmart Supercenter.