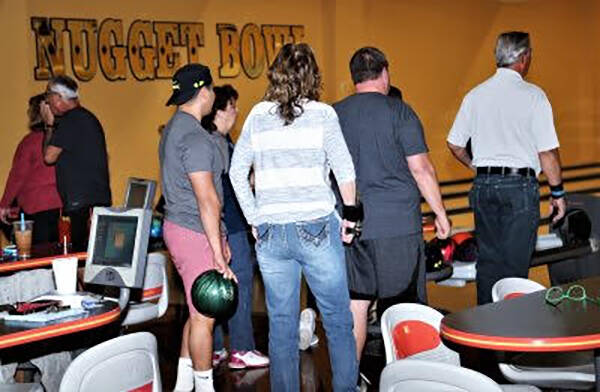 Randy Gulley/Special to the Pahrump Valley Times The Nugget Bowl inside the Pahrump Nugget will play host to the Wounded Warriors Bowl-A-Thon this Sunday.

This week, Flanagan received word from the Las Vegas Motor Speedway that it would like to lend a hand in her mission of raising money to support Wounded Warrior Project, offering tickets to see a NASCAR race at its venue in 2023.

“The Las Vegas Motor Speedway is always so generous for my cause,” exclaimed Flanagan, a veteran herself who served 27 years in the U.S. armed forces. “Tickets to NASCAR events are pricey so this brings in a lot of raffle tickets for our event. Between that and all the prizes that have been generously donated by our local businesses, there are around 150 items for the bowl-a-thon. I’m beyond excited!”

The NASCAR prize includes four tickets to the Pennzoil 400, scheduled for March of next year, which come in at an incredible value of $970. Flanagan remarked with obvious delight, “I’ve never asked how much they are worth before and I am blown away!”

Bowl-a-thon attendees will have the chance to win these tickets by purchasing raffles tickets specifically for this prize, which will be sold in increments of 10 tickets for $10.

Other prizes will be raffled in the general raffle, which will cost $1 for a single ticket, $5 for six tickets, etc. Another big prize for the bowl-a-thon is the Raiders Commemorative Stadium, raffle tickets for which will be sold at a minimum of $5 for five tickets.

With 9-pin, no-tap bowling for just $10 per player and a plethora of raffle prizes set to bring in thousands of dollars, Flanagan is eagerly looking forward to this Sunday’s event. She is encouraging anyone with a heart for veterans’ causes to head out and join in for an afternoon of fundraising, with all the money generated to then be donated to Wounded Warrior Project for use in assisting former military service members who have suffered injuries, whether physical, mental or emotional.