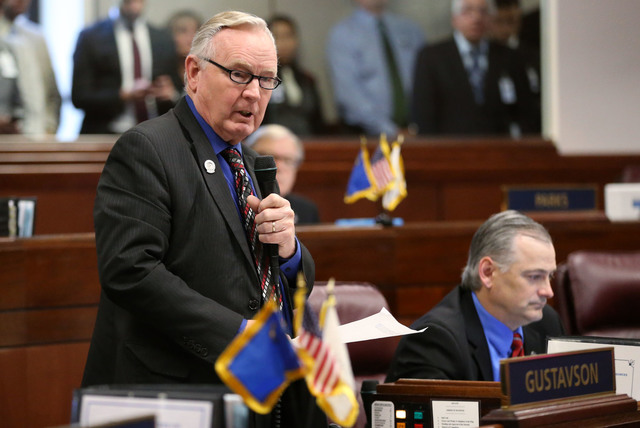 Nevada state Sen. Don Gustavson, a Republican whose district includes part of Nye County along with Esmeralda County, said he will not run for re-election to District 14 in 2018.

“I did not go to Carson City to make friends, I went there to make a difference,” Gustavson said in a statement. “I made promises to the constituents I serve and I kept those promises. It’s been an honor to serve the people of Nevada and I appreciate their endless support, but I never thought of legislative service as a career.”

He scored a recent legislative victory when Nevada increased its speed limit to 80 mph on a 134-mile stretch of Interstate 80.

Gustavson for years had argued higher speeds should be allowed on Nevada’s long stretches of roadways through remote, uncongested regions.

Gustavson sponsored a bill in 2015 that allowed NDOT to raise the speed limit to 80 mph in areas it deemed appropriate.

Gustavson, one of the most conservative lawmakers in the Legislature, was elected to the state Assembly in 1996, winning the District 32 seat after unsuccessful bids for District 28 in 1990 and District 27 in 1992. He spent four consecutive terms over two districts before losing a re-election bid in 2004, but won the District 32 seat back in 2008, served one term, then jumped to the Senate in 2010.

Gustavson, 74, of Sparks said he is looking forward to spending time with his family but did not rule out a future run for higher office.