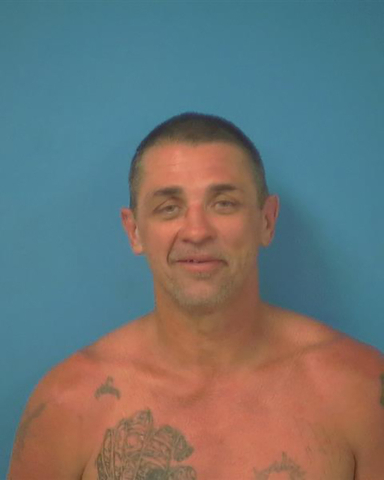 Deputies stopped Jones, who was said to have been acting and riding erratically on his 2005 Harley Davidson just after 11:30 a.m.

According to a sheriff’s office press release, Jones’ behavior became confrontational as deputies were speaking to him.

During the encounter, deputies gave Jones the option to just “get on his bike and leave.”

During that time, Jones was observed emptying his pockets and throwing the contents on the ground, all the while walking in and out of traffic and crossing the highway.

He eventually came back.

“I was able to get through the encounter and he was released with a warning,” the deputy stated in the release.

After clearing the stop, the deputy said Jones rode his motorcycle into the Albertson’s Plaza and began riding recklessly and creating a disturbance.

He then proceeded to Walmart and began causing additional disturbances inside the store, according to the report.

Several Nye County Sheriff’s deputies located Jones inside Walmart, where he was placed under arrest.

The deputy said at that point, Jones became violent and actively fought with the deputies while being led to a marked sheriff’s unit in front of the store.

Jones was eventually placed in a patrol car and transported by a sergeant to the Nye County Detention Center.

As the car was exiting the plaza, in the area of the Verizon store, the sergeant reported to Nye County dispatchers that Jones was trying to kick out the windows of the vehicle.

That’s when the sergeant stopped the vehicle.

“The sergeant opened the patrol vehicle door to restrain Jones, and Jones jumped out of the patrol car and began fighting with the sergeant,” the report stated. “Additional sheriff’s deputies responded and Jones was taken into custody again.”

During the encounter deputies identified that Jones was exhibiting signs and symptoms of what’s known as an Agitated Chaotic Event.

Pahrump Valley Fire and Rescue medics were summoned to the location, where Jones was medically assessed at the scene and transported to Desert View Hospital.

The report stated that Jones fought all the way to the facility.

After being treated, Jones was medically released and transported to the Nye County Detention Center where he was booked on charges ranging from battery on a police official, resisting arrest, under the influence of a controlled substance and misdemeanor traffic offenses.

No court date has been set.