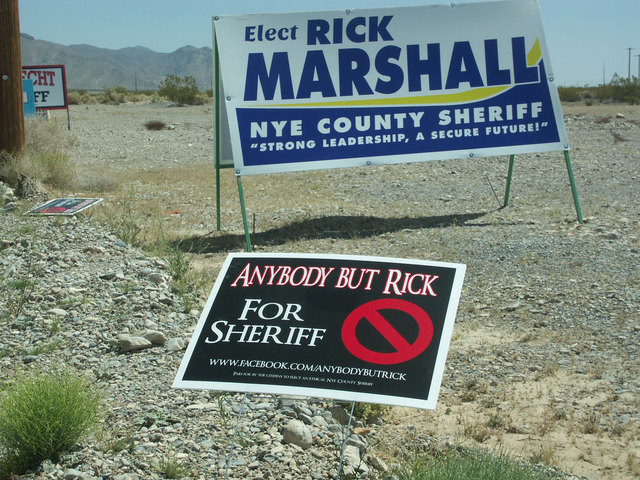 Marshall was arrested along with a sheriff’s office volunteer on April 22 after the two men were videotaped removing campaign signs belonging to a political action group organized around upsetting Marshall’s chances of becoming the county’s next sheriff.

An arraignment is scheduled for Sept. 9 at 9 a.m.

It was unclear whether Ben Gulley, the volunteer arrested alongside Marshall, will face any charges.

“I haven’t heard anything from anybody,” he said.

Gulley’s attorney, Jason Earnest, also said he had not heard yet whether the volunteer will be charged.

Marshall declined to comment when reached by phone. He referred the inquiry to his attorney, Josh Tomsheck.

In an email, the attorney said that he expected the single criminal charge to be dismissed at the September arraignment hearing.

“The ultimate resolution of this matter does precisely what we thought it would from the outset, showing that Rick was not intentionally doing anything illegal or improper. The case will resolve to a dismissal of all charges and allow Rick to do what he had done for the past 3 decades, devote his life to the service of the residents of Nye County,” the attorney wrote.

Tomsheck went on to accuse the group behind the “Anybody But Rick” campaign, signs of which were at the center of the case, of creating false allegations in their pursuit of a “personal vendetta” against Marshall.

“This investigation makes abundantly clear that the allegations of the parties that have a personal vendetta against Rick and have gone as far as to form a political action committee advocating for the election of anyone other than Mr. Marshall, are inaccurate and off base. Rick is pleased that this matter will be completely dismissed at his court date in September and is thrilled that the voters of Nye County can turn their full attention to making their community as safe and strong as it should be,” the attorney wrote.

Steven Lee, president of the political action group organized to stave off a Marshall victory in November, did not return multiple phone calls seeking comment.

Lee was the person who videotaped Marshall and Gulley taking down the political signs. He alleged that more than 40 of his signs went missing ahead of the June primary election, in which Marshall eked out a second place finish ahead of retired NCSO Capt. Bill Becht, but shy of first-place finisher Sharon Wehrly, an investigator at the county district attorney’s office.

When Marshall and Gulley were first arrested, they faced more serious charges, including a resisting arrest charge for Marshall, who Gulley said at the time was manhandled by his own subordinates. Those charges were not substantiated by the AG’s office.

The pair were arrested while driving around town checking Marshall’s signs. When pulled over, the two men were confronted by more than half a dozen deputies and detectives, some of whom drew their weapons. Gulley, 76, said he feared for his life.

Sheriff Tony DeMeo was out of the country when the arrests happened. The case was referred to the AG’s office on May 6 after District Attorney Brian Kunzi told county commissioners his office could not prosecute Marshall and Gulley because of the close working relationship between the DA and Marshall. That decision was also based on the fact that one of the detectives involved in the arrests also acts as union president and negotiates labor agreements with Kunzi.

In the meantime, seven deputies went on “stress leave” after Marshall and Gulley returned to work. Three of those deputies — David Boruchowitz, Harry Williams, Logan Gibbs and John Kakavulias — have returned to work. Christopher Gelson and Adam Tippetts are scheduled to return soon. Another deputy, Brian Jonas, resigned his position.

All were involved in the arrests and may face sanctions if DeMeo orders an internal review and fault is found now that the AG’s office has completed its investigation.