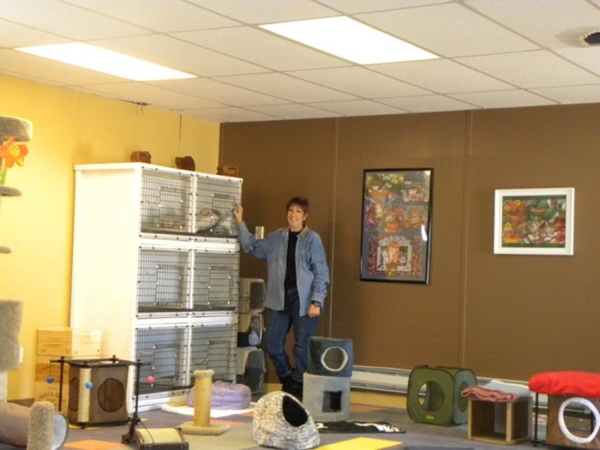 After more than six years of setbacks, disappointments, and funding issues, Symphony Animal Foundation opened its doors for business back in July.

Since then, the no-kill animal facility has adopted out dozens of pets who otherwise, most likely would have been eventually euthanized.

Though Russo-Harper and her husband Kevin have since moved from the Pahrump Valley, one thing remains in town.

Her short answer was to make a decent living.

“My husband Kevin and I moved to North Carolina for work,” she said this week. “I am no longer at Best Western, and at the end of July the county eliminated his code enforcement town position.”

With two incomes out of the picture, Russo-Harper said she considered a couple of alternatives.

She could make the commute to Las Vegas where there are more opportunities for gainful employment, or leave Nevada entirely.

Both chose the latter.

“What I do in the casinos is a nighttime gig and I just couldn’t make that drive any longer because I’m not as young as I used to be and I don’t see as well as I used to,” she said. “I couldn’t make the drive both ways, so we sold the house and got work here in North Carolina. We got the positions before we even left Pahrump.”

She said quite simply, several individuals in town have continually accused her of financial improprieties and mishandling of funds.

In essence, she said they were accusing her of stealing money from the foundation.

“The foundation is there and it is thriving,” she said. “I never built it for me to actually run it. I did not build it to create a job for me, I built it for the animals of this community so they would have a humane alternative. They are crucifying me because for whatever crazy reason, and they are accusing me of leaving with all of the foundation’s money. It’s not hard to find out that the foundation is still there and doing better than ever.”

Though Russo-Harper didn’t name names, she said she has a very good idea of all who are trumpeting the rumors.

“It’s just a small group of the same people and all they do is make noise,” she said. “They do absolutely nothing to help this community or benefit their neighbors. It’s just a small group of narrow-minded people because the reality of it is, the foundation is doing really, really well. The animals are getting adopted out and if what they are saying is true, that would not be happening.”

Musall, an 18-year Pahrump resident, said the foundation is indeed making a successful contribution to the community in terms of providing care and a loving environment for the animals.

She also noted the foundation is financially sound.

“I don’t do the taxes and we do have an accountant,” she said. “I think that if there were any tax forms missing or years missing, don’t you think the IRS would be looking at her? We’re a 510 c 3 non-profit and the IRS is very strict. People like to start rumors, but they should be able to prove it. If there was some kind of embezzlement going on, would she not be arrested? Nobody gets away with that.”

Musall also said she has an idea why such rumors gain traction in the community.

“It begins with people who have nothing better to do with their lives and obviously, they are unhappy people,” she said. “If they came up here and visited the foundation, they would probably see things differently, or maybe not, because they’ll believe what they believe no matter if the facts prove them wrong.”

Musall also spoke about Russo-Harper’s work ethic while construction of the foundation was in full swing.

“Laraine and Kevin would come up and do the work themselves,” she said. “She would work all day trying to get the foundation up and running. It’s very disheartening to hear people like that when they obviously don’t know what they are talking about.”

The foundation is a vast facility with several modular buildings enclosed in chain link fencing.

Amenities include shading for outdoor kennels, a dog park and climate-controlled interiors.

There are stalls for larger animals such as horses and livestock.

Large cages for pet birds are also on site.

Russo-Harper, meanwhile, said she has not broken ties with Pahrump as she plans to continue co-hosting Karen Jackson’s afternoon radio broadcast.

“I’m not sure exactly when I will be able to get back on the air with Karen but I’ve got everything lined up here and I gave her all the information that she will need,” she said. “We’re three hours ahead here so it will be 4:30 here when I go on the show, and it will be 1:30 Pahrump time. I’m looking forward to it and it’s going to be a lot of fun.”

She also said she still plans to visit Pahrump from time to time, as well as continuing to support Symphony.

“I’m working on a promotion for a fundraising event in February, a fundraiser for Symphony and I’ll probably come back for that,” she said. “Fortunately I have a daughter and granddaughter in Las Vegas, so I still have ties to Nevada.”

Additionally, she spoke about what she encountered shortly after arriving at a North Carolina rest stop in October.

“We drove cross-country with all six of our dogs,” she said. “It was so funny because we go to these rest areas to walk the dogs and it looked like a circus clown car because all these truckers and everybody else looking with their jaws dropped because all of these dogs keep coming out of the toy hauler and they we’re getting bigger and bigger. I’ve got my two Saint Bernards, a Newfoundland, a pitbull, a German shepherd and a dobie. We’re all here and the dogs are doing great and we are just loving this weather out here. I’m very excited about our new beginnings in North Carolina and people here are just so nice. Southern hospitality is something that could really be infused and used in Pahrump.”