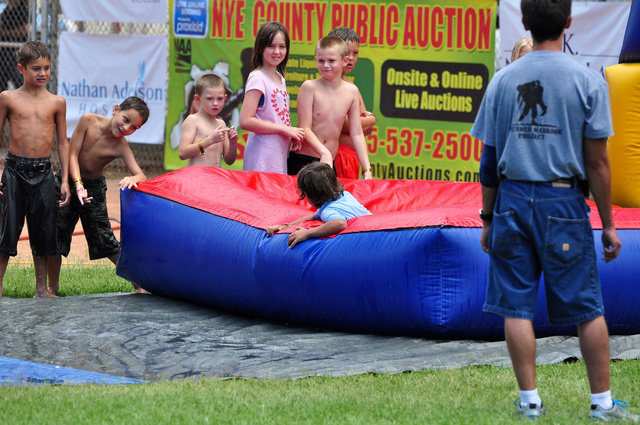 Horace Langford Jr./Pahrump Valley Times The annual Pahrump Liberty Festival returns to Petrack Park on Monday with activities for kids and adults. The event will kick off at noon, with the popular fireworks show beginning at 9 p.m.

The event features an all-day free swim for attendees, courtesy of the Valley Cruisers of Pahrump, as well as numerous other activities for kids.

Pahrump Chamber of Commerce CEO Chris Irwin said out of a total of 61 available vendors booths, 58 have already been spoken for.

We are down to three booths left and I anticipate they will get claimed in the next day or so, he said. We will have six inflatable kids attractions. I dont want anyone to think there are simply bounce houses, because one of them will be a 30-by-30-foot pool where kids can get inside and have fun and frolic around. It should be a lot of fun for them.

Other activities Irwin said include a water balloon tossing and watermelon eating contest beginning at 4 and 6 p.m. respectively.

Its $20 for an all-day pass, he said. The festival will run until the fireworks show begins at 9 p.m. We are telling the vendors that as soon as the fireworks are over, then they can start breaking down.

Prior to the event, Irwin said the annual Liberty Festival Parade is scheduled for 9 a.m. along Calvada Boulevard.

The parade is being handled by the local VFW chapter, but the chamber is decorating the Calvada Eye to make it a more festive environment, he said. The VFW is also doing their pancake breakfast from 6 to 8 a.m. and they will be overseeing the parade beginning at 9 a.m.

As the Liberty Festival is one of the smaller events hosted by the chamber, theres no real budget for live entertainment at the park.

We will have a stage set up and one of our board members who has a DJ business will set up his equipment and provide some background music, he said. We are also asking people not to bring or use fireworks in the park during the festival. They should leave that to the pros.

Irwin also noted that unlike last year, the 2016 Liberty Festival is a one-day event.

Because of the way the calendar fell last year, the Liberty Festival was a three-day event, he noted. Last year the Fourth of July was on Saturday. This year, with it being on Monday, it would be really difficult for us to extend it an additional day. It will be that way for the next couple of years.

Petrack Park is located at 150 Highway 160 at the intersection of Basin Avenue.