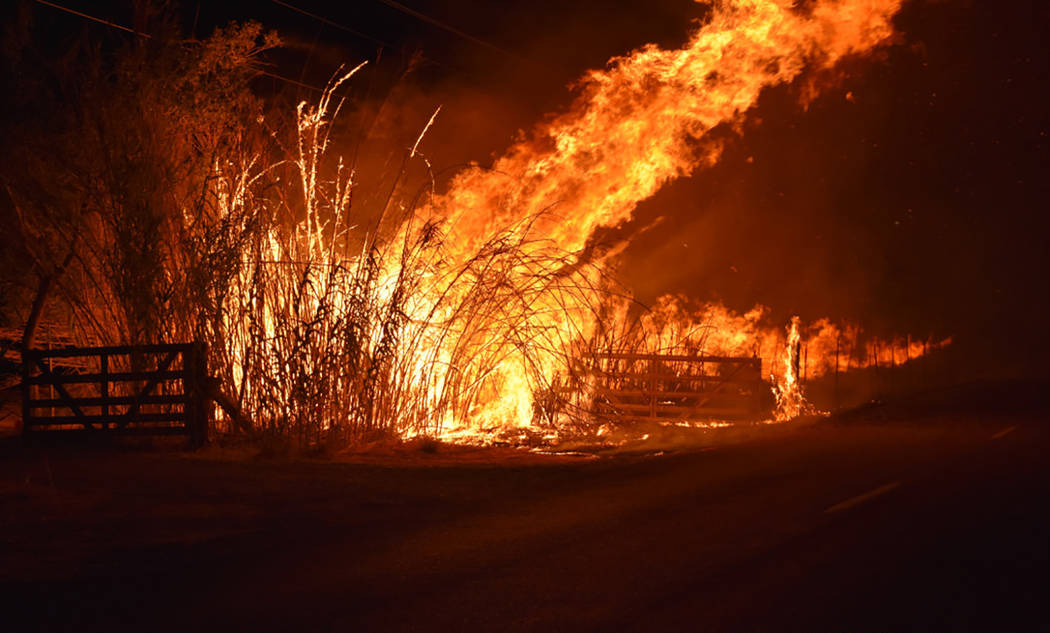 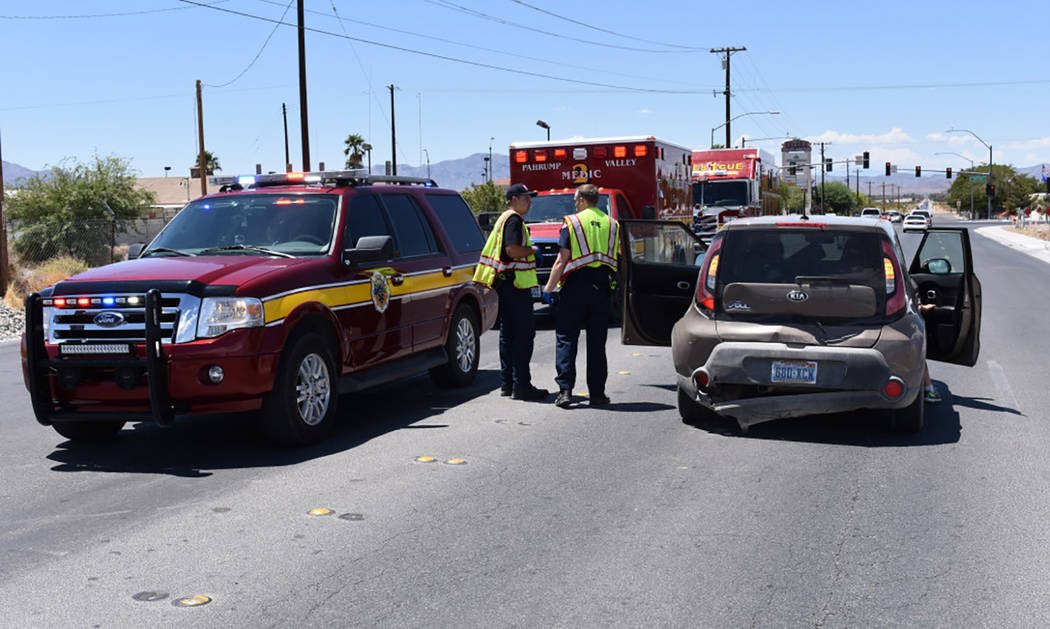 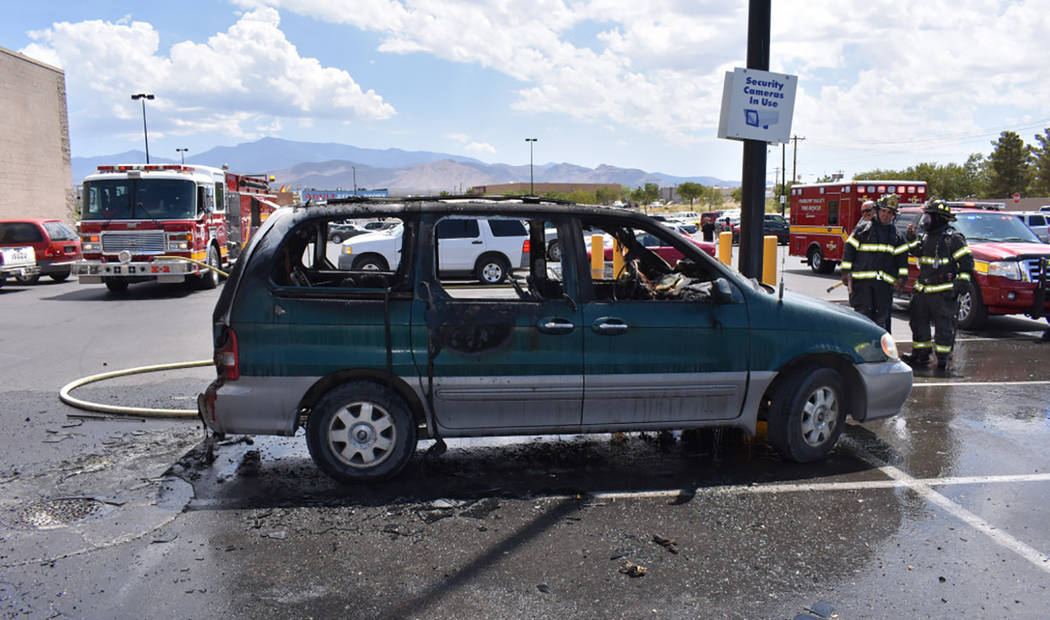 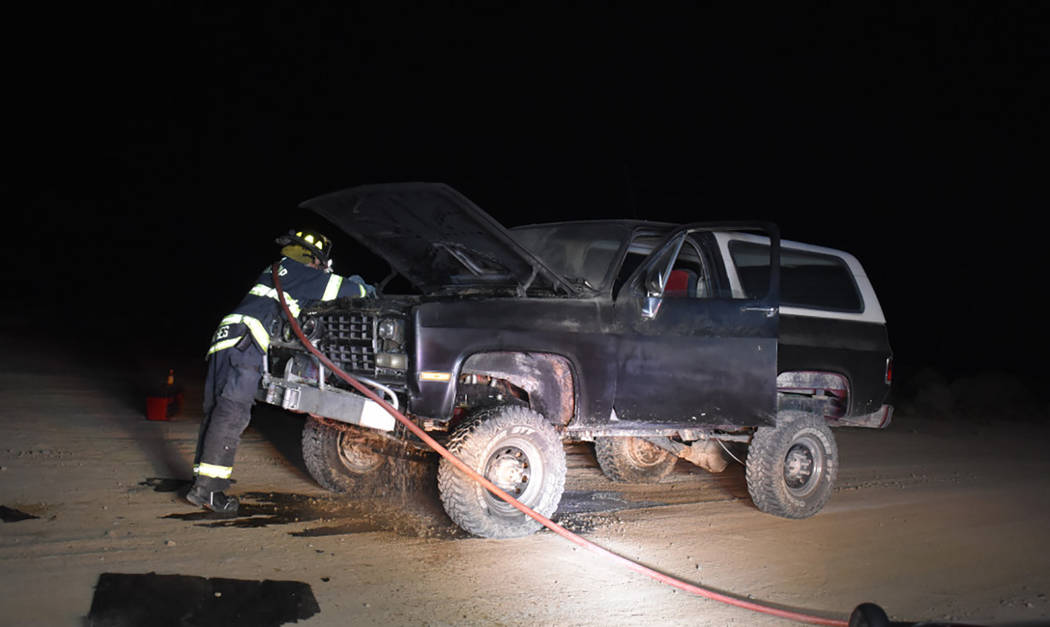 Monday evening proved to be a busy one for area fire crews as they responded to two simultaneous fires just after 9:30.

Pahrump Valley Fire and Rescue Chief Scott Lewis said crews were first dispatched for a report of a brush fire in the area of Oakridge Avenue and Bridger Street.

“As the station responded, they came across a separate brush fire in the area of Travois Street and Kellogg Road,” Lewis said. “As a result, they were prevented from continuing to the initial dispatch and worked on the Travois and Kellogg brush fire, where they got that under control. In the meantime, the remainder of the assignment came from the north-central part of the valley where they responded to the area of Bridger Street for the initial fire.”

“There were also some spot fires on the opposite side of the roadway,” Lewis noted. “All of the fires were contained and controlled within short fashion. This was a dramatic appearing fire with a large flame, lengths that could be seen throughout the area. There were no immediate exposure structures in jeopardy. Those fires are under investigation and there were no injuries reported.”

Just prior to the aforementioned service calls, fire crews were dispatched to the area of Gamebird and Blagg roads.

“At 8:48 p.m., on Monday, we were dispatched for a passenger vehicle fire,” Lewis said. “Upon arrival, we found an engine compartment fire with no immediate structure exposures. Crews quickly controlled the fire with no extensions and there were no injuries reported.”

Earlier in the day, fire crews responded to a two-vehicle collision in the area of Basin Avenue and Emery Street, just after 1 p.m.

“Upon arrival, we found a two-vehicle accident, with one vehicle having being struck from the rear,” Lewis said. “While there were injuries, both occupants declined medical transport to the local hospital.”

Last week proved to be just as busy for first responders, Lewis noted.

“On Friday, July 28th, at approximately 1:24 p.m., we were dispatched for a report of an injury motor vehicle accident at Highway 372 and Pahrump Valley Boulevard at the roundabout intersection,” Lewis said. “Apparently the vehicles were attempting to negotiate the roundabout where one vehicle was rear-ended. There were minor injuries but all patients refused transport to the local hospital.”

On Saturday, July 29, crews were summoned to the parking lot of Walmart for a vehicle fire, just before 11 a.m.

“Upon arrival, we found a well-involved van in the south parking lot of Walmart,” Lewis said. “In addition to the fire conditions, there were also discharging fireworks inside the van. Crews took a cautious posture, considering those fireworks and quickly controlled the fire with no extensions to nearby exposure vehicles. There were no injuries reported.”

Also on Saturday, crews were dispatched for an injury motor vehicle crash at 11:35 a.m.

“That was a mutual aid assignment in Amargosa Valley along Highway 373 and Mecca Road,” Lewis said. “This was a single-vehicle rollover accident, where upon arrival, crews found no entrapment. However, there were two injured persons who were transported to Desert View Hospital.”

“Upon arrival, we found the fire running alongside the roadway,” Lewis said. “While there were no immediate exposures, crews came in and extinguished that fire without incident.”

On Sunday, fire crews were summoned once again to Amargosa Valley for a motor vehicle collision in the area of Powerline Road just before 2:30 a.m. but were subsequently canceled shortly after arriving on scene.