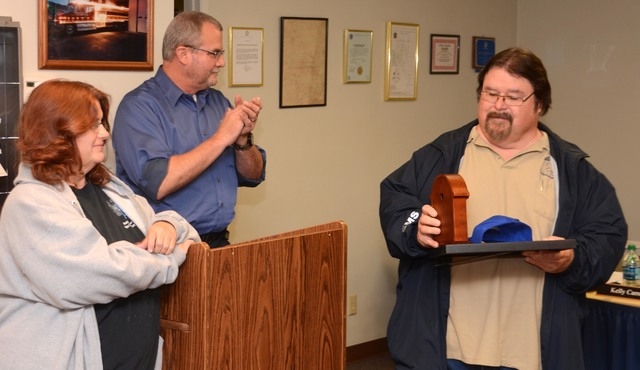 Beatty Volunteer Ambulance Service EMT Mark Henderson was honored at the Beatty Town Advisory Board meeting Jan. 12 for his 35 years of service to the community.

Nye County Emergency Services Director Vance Payne made the presentation, noting that Henderson had been previously recognized at the last County Commission meeting.

Henderson originally trained as an EMT in 1979 and still serves as a volunteer.

“I think if I had done it as a job, I wouldn’t have done it so long,” said Henderson. He said one key to avoiding burn-out is not to be too obsessive about the work.

Henderson’s wife, Allison, the local ambulance service coordinator, also presented him with a clock as a token of appreciation from the volunteer group.

Deputy Alan Lynn was also recognized at the meeting, having been chosen to receive the town’s Good Citizenship Award for the last quarter of 2014. His work in helping clean up the gun ranges was mentioned specifically.

After receiving his award and crediting those who had helped with the cleanup, he turned to Henderson and said, “Mark, you’re the man. You’ve been doing this since before I was born!”

During the monthly reports portion of the meeting it was noted that three organizations in Beatty have openings on their boards of directors – the Beatty Museum, Beatty General Improvement District, and Beatty Water and Sewer District.

The board is working on developing comments to be sent to the Southern Nevada District Bureau of Land Management regarding its Resource Management Plan Environmental Impact Statement.

Board treasurer Erika Gerling referred to the 2,055-page draft as “a horrible document,” and said she thought it was purposefully made complex and confusing to discourage comment.

The board’s preferred action for each of the locations mentioned in the document, which include Ash Meadows, Big Dune, and Lava Dune is that nothing be changed.

The board is also developing a letter of support for the STORM-OV mountain bike trails project.

David Spicer read a very complimentary letter of support for the project from the Nature Conservancy, and the board felt that they could use some of the points made in that letter in drafting their own.

Spicer said STORM-OV would appreciate letters of support from as many groups and individuals as possible, saying, “We need a unified effort to show that the community wants this to happen.”