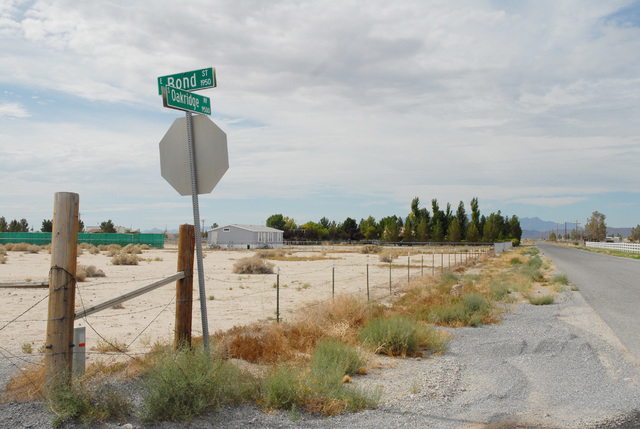 A 30-acre parcel on the far south end of Pahrump near the intersection of Bond Street and Oakridge Avenue will be the home of a blueberry farm pitched to the Pahrump Town Board earlier this year, landowner Dan Harris said.

The Pahrump Regional Planning Commission last week recommended county commissioners approve a master plan amendment from medium density residential to low density to allow agriculture. It passed almost without discussion. Harris was put on hold last month after Deputy District Attorney Tim Sutton said the RPC couldn’t approve a zone change that wasn’t in accordance with the existing master plan which designated it as medium density residential, that didn’t permit agriculture. The RPC also recommended rezoning the property from village residential to rural estates. The property would be in conformance with the revised master plan, which has been approved by the RPC but is awaiting approval by county commissioners.

Harris told the RPC last month his family wanted to start farming in the fall and hoped for speedy approval, it was fast tracked for county commission consideration Tuesday, instead of waiting another month. In a letter to the RPC, Harris said his company, Harris Ltd., has owned the adjacent property to the north for 50 years.

Last year Julian Muller and Jeannie Vaughn, with the New Jersey firm Muller, Bohlin and Associates, presented the Pahrump Town Board with information on a proposed blueberry farm project, they originally wanted to acquire 10 acres from the town of Pahrump, which expanded to 59 acres last April. The proposed bargain rate of $2,000 per year for a 25-year lease aroused considerable controversy. Pahrump Town Manager Susan Holecheck told the town board farm owners would give the town $100,000 or a percentage of the profits after five years.

But there were concerns about road access. The town board proposal was also tied up with concerns over acquiring water rights on the alluvial fan. Harris said the blueberry farmers want to lease 20 acres where he and his father Hollis Harris graze longhorns. There are already 75 acre feet of water rights, he said, the farm will use about half of that.

“When we came to the town we tried to put together a package where we could lease them some land and some water rights and it kind of got convoluted is the right word to use,” Pahrump Town Board Vice-Chairman Bill Dolan said. He approached Debra Strickland, co-owner of Strickland Construction, who had water rights to lease. Strickland lined him up with another site.

“I really wish we could’ve done a deal with the town, it would’ve brought in a tremendous amount of revenue to the town, but at least the revenue will be staying in the town limits with individuals. But one of the most important things, it will create jobs. This program has been very successful where they started it in South Africa. Our climate and what needs to be done almost mimics South Africa from what I understand,” Dolan said. “I understand they already have letters of agreement for multiple hotels in Las Vegas to take every piece of product they can grow.”

Researchers at North Carolina State said it would take three years to produce a crop of 2,000 pounds an acre, if there was irrigation and good soil, increasing up to 8,000 pounds per acre by the seventh year. Yields would be a little less in poorer soil. The researchers used prices of 60 cents per pound. Researchers said an irrigated blueberry farm could return an annual investment of 16.6 percent.

In other action at a brief RPC meeting, the board approved a master plan amendment for four property owners at Pahrump Valley Boulevard and Thousandaire Boulevard to change four acres master planned as general commercial to low density residential. The property was already rezoned from general commercial to rural estates by county commissioners but that doesn’t take effect until the master plan plan amendment is approved, which was scheduled for a vote by county commissioners Tuesday.