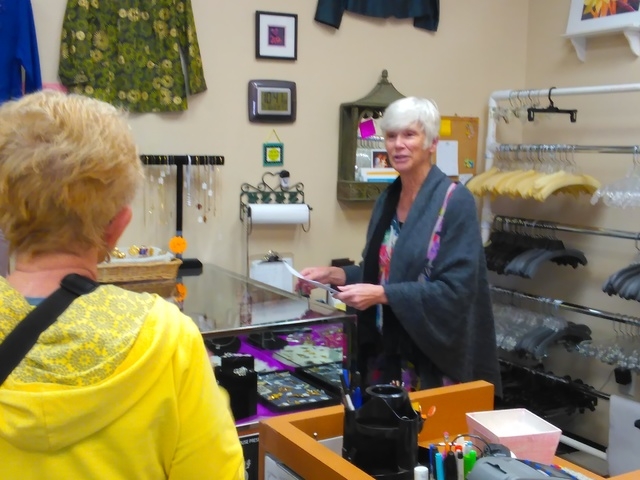 Judging from her warm smile and courteous attitude, you wouldn’t think that Pahrump business owner Sharon Tate recently lost more than $4,000 worth of merchandise.

The eight-year business owner said the crime occurred within the past several weeks at her clothing consignment shop, Secret Sisters, along Postal Drive.

What she can’t fit in her shop, Tate secures in an exterior storage unit.

She noted on Wednesday, that the unit was not secure enough.

“We don’t know exactly when it occurred,” she said. “I went in there last Thursday and saw that it had been burglarized. We don’t go in it every day, but the last time was about three weeks ago. The cops kept asking us when it was, but we have no way of actually pinpointing it.”

Tate said she has no idea who may have committed the crime, but whoever it was, went through a lot of trouble to relieve her of the merchandise.

She also believes more than one individual was involved.

Tate said during her time as a business owner, she’s never had such an occurrence befall her.

“In our old location, somebody tried to break in but never made it in and that was the only other problem that we’ve had,” she said.

“Because the storage unit is outside, there was no video surveillance focused on it, plus the cost for surveillance can get quite expensive.”

Additionally, Tate said she and her staff will be on the lookout for the stolen merchandise, if some comes in to for a consignment transaction.

As a result of the loss, Tate said she’s now forced to cancel a popular sidewalk sale she regularly hosts.

“Twice a year we have a parking lot sale where everything in the parking lot is $1.99 and that’s what those items were,” she said. “We have a lot of people that want to know when the next parking lot sale will be, but they’re going to be very disappointed because we just can’t have it. I was just going to call the paper to put in the ad but it’s not going to happen this time as a result of what happened. It’s very frustrating but what can you do?”