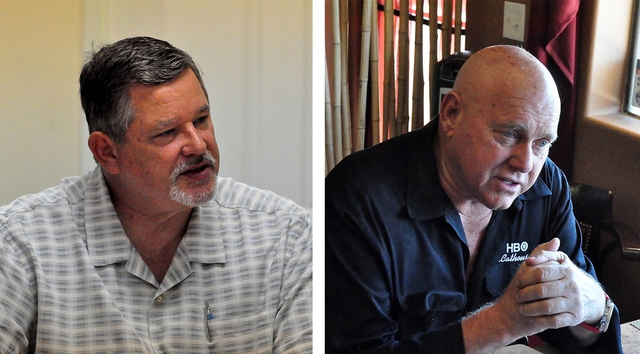 Republican James Oscarson, left, is in the midst of a contentious campaign for the state Assembly District 36 seat with Libertarian and brothel owner Dennis Hof. Special to the Pahrump Valley Times

The third round of campaign contribution and expense reports were released this week and show that state Assembly District incumbent James Oscarson drew in more money, from far more donors than opponent Dennis Hof.

The report covers the period from June 10 through Oct. 14.

Hof’s total expenses for this period were $66,750, which is also the total of his entire campaign expenses so far.

Oscarson said that the amount of donors he has shows that the district backs his re-election campaign.

Hof explained that his campaign being largely self-financed has been the plan because he wants to show voters he’s his own person.

District 36 covers most of Nye and Lincoln counties, as well as rural northern Clark County.

When Hof threw his name in the mix to run for state Assembly in District 36, questions immediately were raised about his residency in the area.

Hof has homes and businesses throughout the state and voters have raised concerns about whether or not Hof should run in District 36. Now that his campaign contribution report list a northern Nevada address, those questions are again being asked.

“People don’t really understand where he truly lives and it’s really no surprise that Dennis Hof really doesn’t live here,” Oscarson said. “He claims his residence to be a brothel that he just moved into in July. That doesn’t make any sense to me.

“He’s not from the community. He’s does not understand what our issues are, or understand our needs.”

Hof explained that he has three homes, one near Carson City that burned down last week after a controlled burned got out of hand, a vacation home in Lake Tahoe, California and his residence in Amargosa Valley, where he said he spends the majority of his time.

“That was my second home,” Hof said of his house that was lost in the fire. “The Tahoe house I’m in about 14 days a year and my house… that burned down, I’m in it probably around two months out of the year. Then the rest of my time I’m down here.”

Hof noted that he has businesses in both northern and southern parts of the state, which is why he has homes in multiple areas of Nevada. He said the fire impacted his campaign.

“It set me back a week,” he said. “It’s taken a lot of my time and energy now. It’s a couple million dollar house. It’s a serious deal and the state is responsible.”

Not only did Hof lose the house itself in the blaze, but he also said he lost his mother’s ashes, grandmother’s wedding ring and valuable art, among other irreplaceable items.

No matter what the residency issue is or is not, Oscarson said he is as confident as ever and will win.

Other races of note

The pair of county commissioners involved in the race submitted their contributions and expenses reports as well, with John Koenig claiming $2,500 this period, for a combined total of $11,255 since Jan. 1. Koenig’s opponent, Harley Kulkin did not raise any money this period, with a total of $0 raised since Jan.1.

State Senate District 19 candidate Pete Goicoechea raised $64,000 during the third reporting period, bringing his grand total to $97,900 raised since Jan. 1. Goicoechea’s opponent Janine Hansen did not raise any money this reporting period and has a total of $37.44 raised.