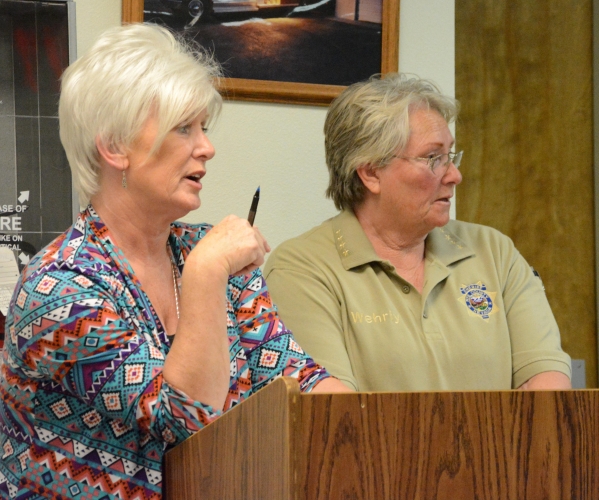 BEATTY – The Beatty Town Advisory Board awarded its Good Citizen Award to Miguel Mendoza at its Aug. 10 meeting in recognition of his actions in assisting the Nye County Sheriff’s Office in quickly apprehending a car thief. Mendoza was not on hand to receive the award in person.

Board Treasurer Erika Gerling was surprised when her fellow board members also presented her with a certificate of appreciation for her work in facilitating the transition of the Beatty Medical Clinic from Nevada Health Providers to Drs. Reiner and Jonak and associates.

Gerling said that Beatty residents need to support the clinic by using it and not going to Amargosa or elsewhere.

With no new business on the agenda and very few reports from other organizations, the meeting looked to be very brief, but that was not the case.

Sheriff Sharon Wehrly and Commissioner Lorinda Wichman were on hand, and they got something of a grilling from Gerling.

Gerling, whose house sits atop a hill in the middle of town, said she often sits outside on her porch at night and can see things going on in town. She said she was shocked when she called the sheriff’s dispatch one night about something she saw and was told that there was no deputy on duty in Beatty or Amargosa.

Gerling became quite emotional, to the point of tears, saying that it was “unacceptable” to have “no one there to protect us.”

“The criminals know when there is no deputy on duty,” said Gerling.

Wehrly said she understood Gerling’s frustration, but that the department was short of deputies, even in Pahrump. She said that one deputy assigned to the area had been out ill for seven-and-a-half months and had only returned to duty in July, bringing the number assigned to the area up from two to three deputies. She added that another deputy has requested transfer to the area, which will bring the number up to four.

Commissioner Wichman said, “I know you understand we are talking about the budget here.” She said that they cannot hire more deputies without the money to pay them.

“There are communities in the north who do not have deputies and never have had,” she added.

The Sheriff said that she and Undersheriff Brent Moody have been personally going out on calls in the middle of the night to try to help out with the shortage of personnel.

Wichman fielded some questions, including one about the recent withdrawal of land to create a vast national monument, the Basin and Range National Monument.

She said one theory of why such a large area was included was that it blocked the route of a proposed railway to Yucca Mountain. She said that it would not affect Payment in Lieu of Taxes money.

Wichman said she does not like it when government imposes things “from the top down,” saying she likes to the things done “from the bottom up.”

Town secretary Carrie Radomski gave the board an update on the town square park. She said it was “moving forward slowly,” and that the necessary supplies should be on hand to “see groundwork starting to happen” in a couple of weeks.

Fred Summers told the board that the Happy Burro’s annual Volunteer Appreciation Day will be Saturday, August 15, from 2 p.m. to 6 p.m. He said they were moving it to the park to have room for more people to attend. Last year the event raised some $800, which was split between the Beatty Volunteer Fire Department and the Beatty Volunteer Ambulance Service.

The latter part of the meeting was taken by Robert Groesbeck and Chris Wren regarding their company’s plans to develop a medical marijuana cultivation and extraction facility outside Beatty. (see page A1).