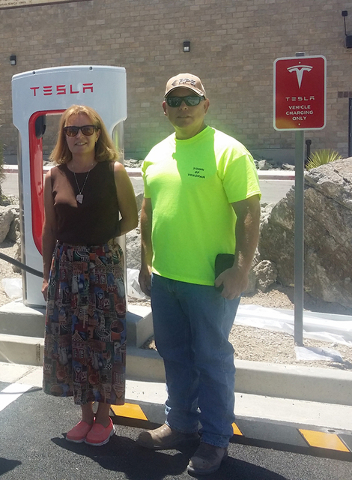 Nye County commissioners filled two vacancies on the Nye County Water District Governing Board on Tuesday, reappointing board members Dave Hall, not pictured, and Joe Westerlund of Tonopah, on right, to their positions. Two spots on the seven-member board remain vacant. David Jacobs/Pahrump Valley Times

Board members Dave Hall and Joe Westerlund returned to their positions after a 3-1 vote during the commission meeting in Tonopah on Tuesday.

Nye County Commissioner Lorinda Wichman said no other applications from the area challenged Westerlunds background. Hall also returned to his seat as the most qualified and best candidate, she added.

The criteria for an applicant is their location and interest, Wichman said.

The ad to solicit applications outlines the criteria, Wichman said. The two board members appointed on Tuesday have already demonstrated their ability to serve the Nye County Water District.

Westerlund currently works as a utility manager at Tonopah Public Utilities, and Hall serves on the Valley Electric Association board of directors, according to the documents.

Westerlund serves area 2 that includes Tonopah, Manhattan and Belmont. Hall serves as the At Large resident of Nye County that excludes Pahrump. The two positions in area 4 that were previously held by Chairman Greg Dann and member Dennis Gaddy remain vacant.

The five serving board members constitute a quorum, a minimum number that enables the board to function.

At the meeting on June 21, Nye County commissioners decided against appointing four members to the WDGB in a 3-2 vote.

I need to follow the DA and the act that we must appoint, Carbone said.

Following the June 21 meeting, Nye County District Attorney Angela Bello said that the act creating the WDGB requires seven members, which are to be appointed by Nye County commissioners.

I wish we had at least one more commissioner vote for the other two (board members) so that board could be fully functional,  Commissioner Dan Schinhofen said.

A teleconference for the WDGB is scheduled for Tuesday.