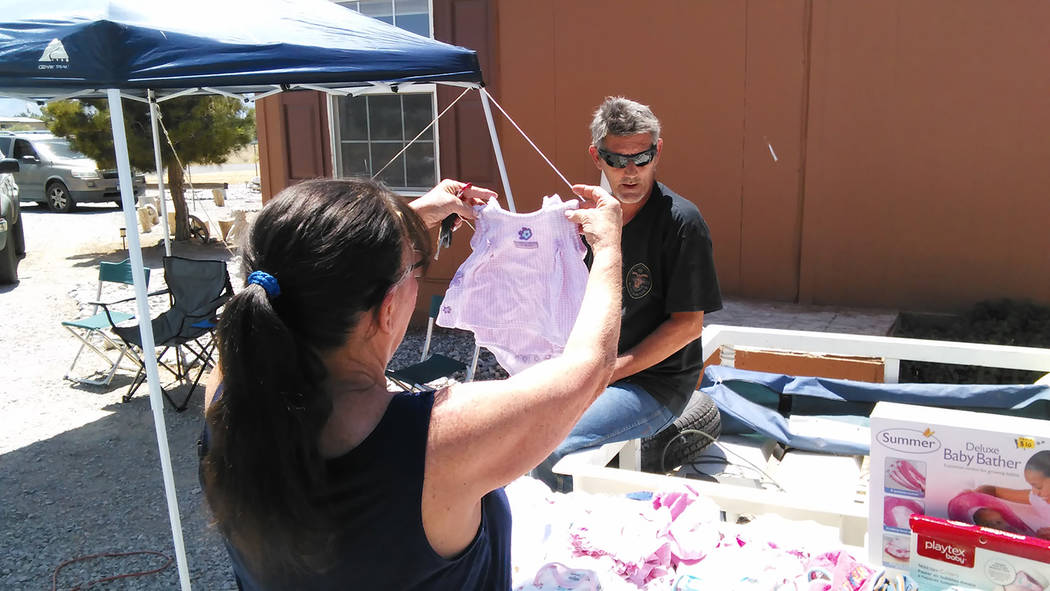 Selwyn Harris/Pahrump Valley Times A customer checks out baby clothing on May 27 during the chamber of commerce community yard sale as resident Mike Woods looks on. More than 50 homes in the community participated in the inaugural event.

“I’ve been cleaning up my house for the past four days, so please stop by,” said one participant.

“I did close to thirty houses. Thanks for organizing this wonderful event,” said another.

“We made back what we spent on the application before 8 a.m. on Saturday,” was yet another remark.

The aforementioned commentaries were Facebook postings regarding the Pahrump Chamber of Commerce Community Yard Sale this past holiday weekend.

The chamber partnered with the Pahrump Valley Times for the inaugural event, as several dozen area residents participated in the four-day affair, beginning Thursday, May 25, where more than 50 homes participated through Monday.

Chamber CEO Chris Erwin said the idea first came to him after a leisurely drive around town just recently.

“I noticed all of the different yard sale signs and it seems that some of our residents have a yard sale just about every weekend,” he said. “I thought about how cool it would be to organize it, so we picked a date and started promoting it. We then realized that communities like Desert Greens, Artesia and Mountain Falls are all doing something similar within their own communities. They had already had their yard sales set prior to our yard sale, so we are hoping to pull them into the event next year.”

Erwin said he contacted Pahrump Valley Times Publisher Noah Cusick to gauge whether the publication would be interested in partnering in the project.

“I was talking to Noah and I felt like it was a service that the chamber could provide,” Erwin said. “It doesn’t cost us a whole lot of time or money, plus we have a great partnership with the Pahrump Valley Times. Noah thought it was a great idea. I also would be willing to guess that the number of yard sales I see, versus the number of yard sales that are actually being promoted in the paper differ.”

It was then that Erwin said he thought it would be a good idea to remind residents that by promoting their yard sale in the newspaper, they are going to get increased foot traffic.

“From a business perspective it was a win-win situation,” he said. “We are hoping next year with the real estate market coming back, some real estate agents can use that foot traffic to do more open houses where we can kind of spawn some other industries off of people who are already out and about.”

Woods resides on Paiute Boulevard on the south end of town.

“I decided to participate because my mom was the one who set it all up here,” he said. “We just decided to give it a try and we have a variety of nice items out here today. A lot of my items are brand new and we have all kinds of knick-knacks, baby clothing, household goods and even bicycles. These items are in great condition. I’m participating the entire four days. Unfortunately, it’s been very slow today. I’ve had yard sales in the past, but not a whole lot.”

Erwin, meanwhile, noted that the chamber would also like to get area businesses involved for future community yard sales.

“I was thinking that with just a sidewalk sale along 160, would make this a much larger event next year,” he said. “The Chamber of Commerce in my opinion, plays a vital role in spawning commerce within the town. We ended up with 51 addresses that we printed in the newspaper ad. I would definitely consider this a success and hopefully we can end up with 150 addresses next year.”