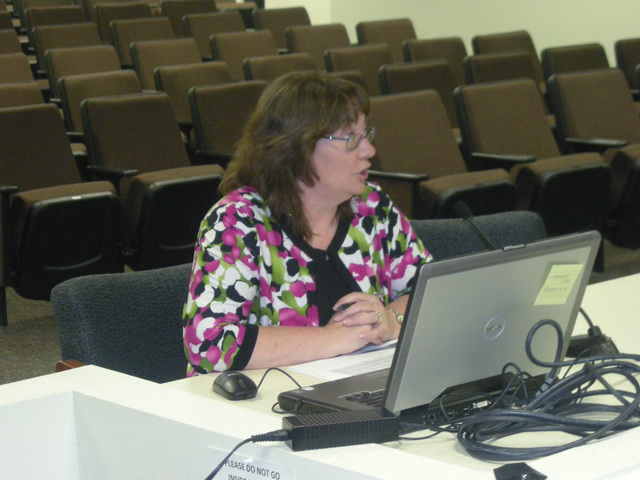 Paprocki was promoted from fiscal analyst to comptroller in February 2012. She was widely credited with maintaining fiscal discipline, with regular updates to Nye County commissioners struggling to keep some department heads within budget. Her exit comes just before the final county budget hearing scheduled next Monday.

“I will recruit for a new comptroller. The budget will be decided on Monday pending many factors that will determine the outcome. I will be handling the budget,” County Manager Pam Webster said.

There will be an agenda item to appoint Assistant County Manager Joni Eastley as interim comptroller until the county is able to recruit a replacement, she said.

Webster was initially hired by Nye County as a comptroller in 2006 and promoted to assistant county manager the following year.

Paprocki received a certificate of completion in government accounting from the University of Georgia in 2010 and a bachelor’s degree in accounting from Breyer State University. A Tonopah resident, she was an office manager of the Banc Club and motel manager of the Tonopah Station in Tonopah before first coming to work as a clerical aide for the Nye County Buildings and Grounds Department in 2002.

“I think she did a good job with all the difficulties we’ve had the last few years,” County Commission Chairman Dan Schinhofen said of Paprocki. When it comes to the budget he said the county already pretty much concluded its work. “There’s not a lot more peaks or tweaks, it’s a question of us choosing all the angles at this point.”

Paprocki told commissioners there would be a $3.5 million deficit during the first budget hearing, without making some adjustments.

Lewis was only hired last September. He was laid off last week as part of a consolidation of the planning department with the Nye County Nuclear Waste Projects Office, Webster said. Interim Community Development Director Darrell Lacy will take over as planning director, she said.

Lewis was a development services director for Merced County from December 2005 to September 2010; before that he was vice-president of land acquisition and development for Plaster Development Company, also called Signature Homes in Las Vegas and planning director of Orion Engineering and Surveying in Las Vegas. He was the owner of Tetra Southwest, in Henderson, from January 1998 to February 2001. Lewis was planning supervisor for the city of Las Vegas from November 1994 to January 1998 and worked in the City of Henderson community development department from December 1980 to November 1994.

Speaking of Lewis’ termination, Schinhofen said, “another consolidation move that’s all we’ve been doing. We’ve been trying to live within our budget, which has been cut drastically over the past few years.”

“I enjoyed working at the county. I knew that they were having budget troubles and I did my part to try to help that. I knew what the deal was going into the job. I know they had an unexpected shortfall of revenue. So that was expected, they have a $3.5 million hole to fill,” Lewis said. “With the closure of the nuclear waste policy office and that funding being dried up, it just makes sense I guess.”

“I fell in love with the place. I enjoyed my time there. We were doing great things. Things were picking up. It’s a timing thing. I’m hoping being laid off I can always be called back,” Lewis said. “I think we have a really good staff, everybody seems to know what their jobs are. We made a lot of success in code enforcement and trying to enforce a lot of the code enforcement issues there.”