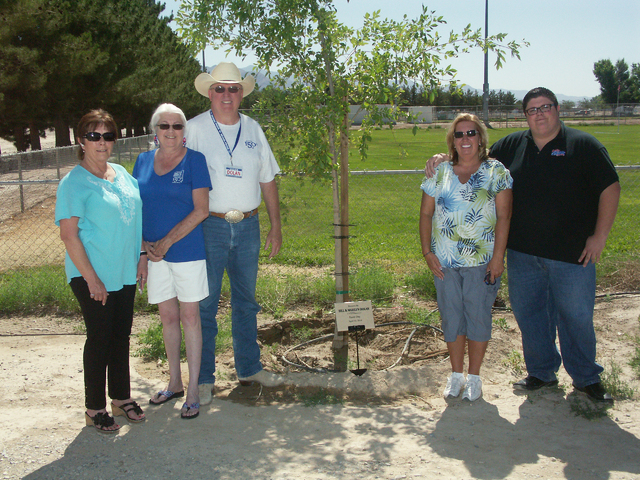 Pahrump Town Board Vice Chair Bill Dolan believes it doesn’t necessarily have to be Arbor Day to plant a tree.

This week, Dolan and a few friends officially dedicated a tree at Ian Deutch Memorial Park.

The young Arizona Ash tree joined a line of much larger and older trees along Pahrump Valley Boulevard.

Following the dedication ceremony, he said the idea came to him while listening to local radio personality Karen Jackson.

“Right before Earth Day, Karen was on the radio talking about doing a new thing for the town. She said would like to plant a new tree each year on Earth Day. I figure in 20 years we will have 20 new trees. We hope to get more people to step up and plant maybe three to five trees a year,” he said.

After hearing the broadcast, Dolan said he contacted Jackson to get the project going.

“I told her that if she could find a spot, my wife and me would buy the first tree. I just wanted to get it started because it’s positive and good for the community. That is what it’s all about, what can be done for the community because Karen does a tremendous amount of things for this community through her KNYE radio station,” he said.

Jackson, meanwhile said she merely wanted to find an appropriate site for the tree planting.

After a few contacts were made, Ian Deutch Park was the chosen location.

“I called our Town Manager Susan Holecheck and she had our buildings and grounds supervisor Matt Luis call me saying he found the perfect place,” Jackson said.

Dolan noted that along with each tree planted, a marker will accompany the sapling denoting who was behind the altruistic gesture.

“It’s really not a big deal because the trees usually run between $100 to $150. Karen also had a plaque made and I understand that every tree that goes down will also have a plaque on it,” he said.

Additionally, Dolan said it’s important to make sure the trees are environmentally friendly.

Some trees such as Salt Cedar absorb a large amount of water each day.

“The Arizona Ash uses very little water. I have one in my backyard that we water maybe once every three months and it looks beautiful,” he said.