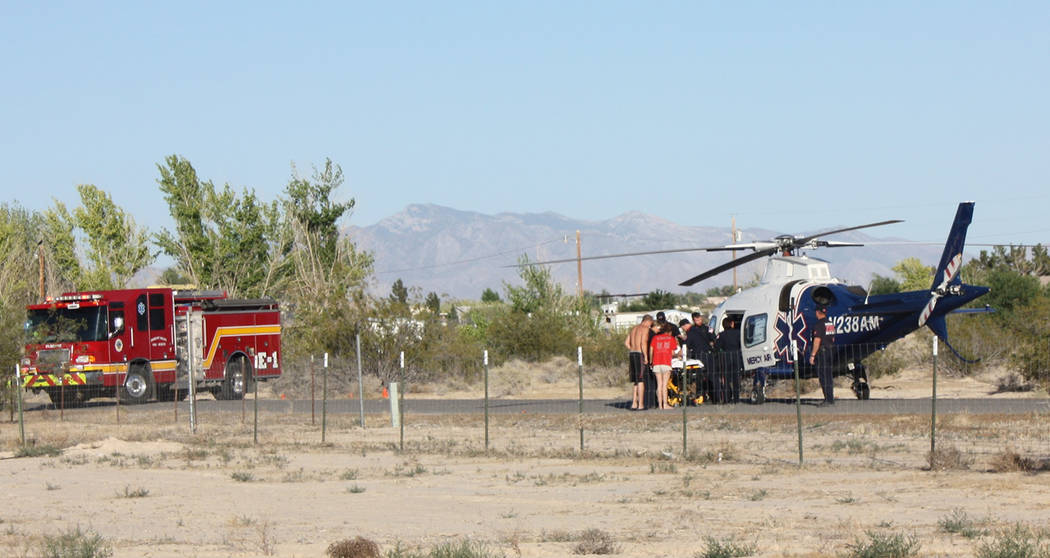 Robin Hebrock/Pahrump Valley Times A three year-old child was flown to UMC Trauma after nearly drowning in a backyard swimming pool on Wednesday June 6. The incident occurred just before 6 p.m., along the 4000 block of East Laute Drive. The Nye County Sheriff's Office is investigating the incident. 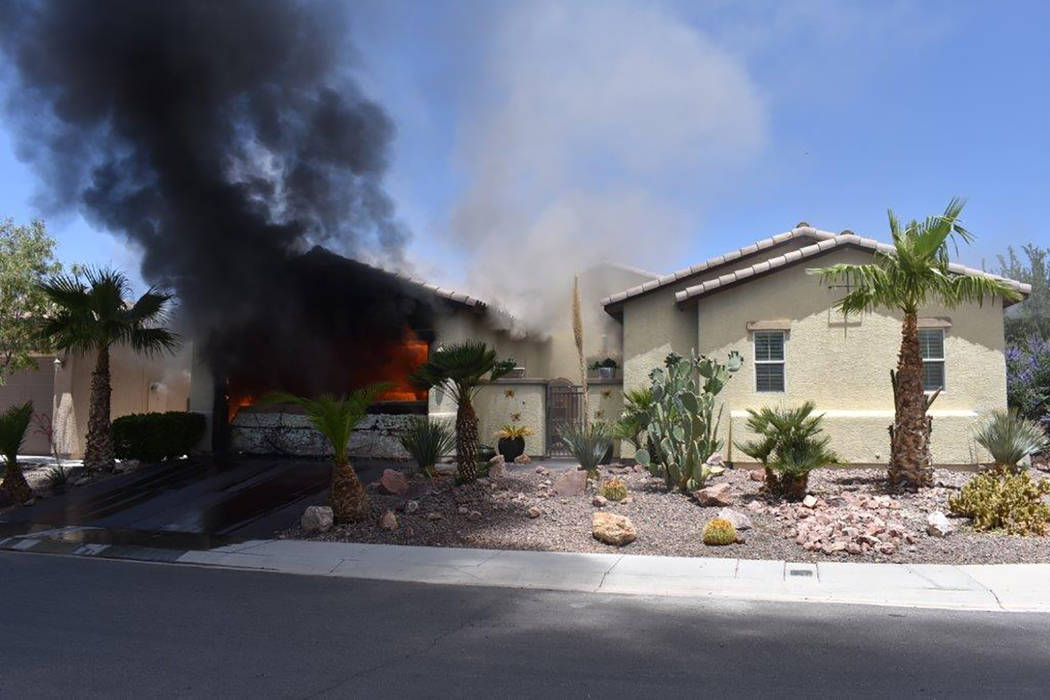 Special to the Pahrump Valley Times A fully-involved structure fire destroyed an attached garage and vehicle along the 5200 block of Agio Avenue in the Mountain Falls community on Monday June 11. The blaze, which broke out just after 12:00 p.m. began inside the garage of the home. All occupants were accounted for and no injuries were reported. 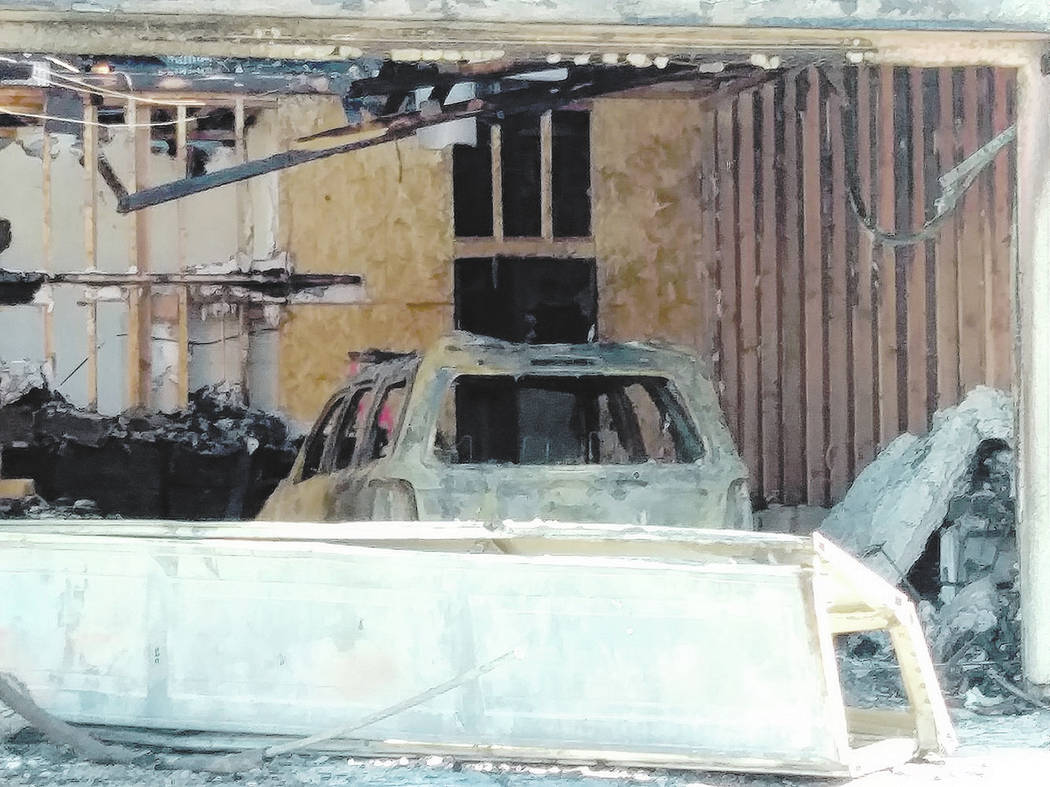 Selwyn Harris/Pahrump Valley Times A 2010 Ford Escape could not escape the flames from the Agio Avenue structure fire early Monday afternoon. Neighbor Eric Fritts said he heard several explosions shortly after the fire started. Fritts also said the couple who owns the home are doing about as well as can be expected at present.

A local 3-year-old child is recovering from a near drowning incident.

“Upon arrival, crews found the child, who was removed from the pool,” Lewis said. “A quick assessment was made and it was determined that the child’s condition warranted a flight to UMC Trauma in Las Vegas.”

Lewis said a landing zone for Mercy Air 21 was established on the street, where patient care was transferred to Mercy Air crew members, and the child was subsequently flown to trauma.

On Monday, June 11, fire crews were dispatched to a fully-involved structure fire on the 5200 block of Agio Avenue in the Mountain Falls community just after 12:00 p.m.

The blaze, according to reports, occurred inside the attached garage of the home.

“Upon arrival, crews found the fire as reported, however, it was extending through the attic space to the primary dwelling,” Lewis said. “Crews commenced a quick blitz attack on the fire within the garage, while other crews stretched lines for the interior attack as well as exposure protection. All of the occupants were accounted for and there were no injuries reported.”

The fire caused substantial damage to the residence, as well as destroying a 2010 Ford Escape vehicle parked inside the garage.

“One of the main concerns we had was exposure control as the homes on that street were closely located to other residences directly to the left of the house,” Lewis noted. “Those homes were all protected early on, so there was no extension beyond the initial structure. The fire was brought under control in less than 45 minutes after arrival. The ignition source occurred within the garage area and the cause of that fire is under investigation.”

Eric Fritts lives directly across the street from the home.

Though he did not witness how the fire began, he watched intently as firefighters sought to extinguish the fire.

“The flames had gotten so intense at one point, that I was on the other side of my gate and I could actually feel the intense heat,” he recalled. “There were also several explosions going on during the fire. My neighbor had his car inside the garage and that’s what was exploding. The fire department did a great job getting the fire under control and containing it and extinguishing it.”

Additionally, Fritts said his neighbors are doing about as well as can be expected.

“They are a very nice couple, and right now they are staying with another one of our neighbors here,” he said. “Obviously, they were in a state of shock yesterday, which is natural of course. The fire got through parts of the house and it actually went through the roof. You can see what part of the roof has actually collapsed.”

Lewis, meanwhile, also had an important message for all motorists who commonly drive along Highway 160 and side streets each day.

“We would just like the motorist on the roadways to please pull over to the right and stop if there is an emergency vehicle with flashing lights coming up behind them,” Lewis said. “We have vehicles that fail to yield to us, which added time to our responses. I just implore the public to please pull to the right and come to a complete stop to allow our apparatus to go around them.”