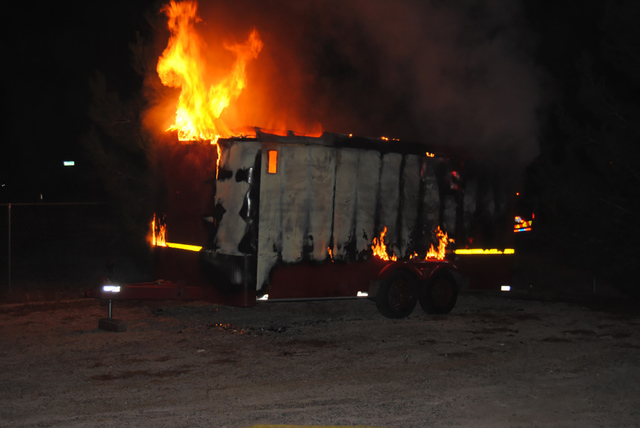 A utility trailer was destroyed on the 1700 block of Casey Street last Tuesday Oct. 18, just after 11:30 p.m. No injuries were reported as a result of the blaze. The cause of the fire is thought to be accidental. Special to the Pahrump Valley Times 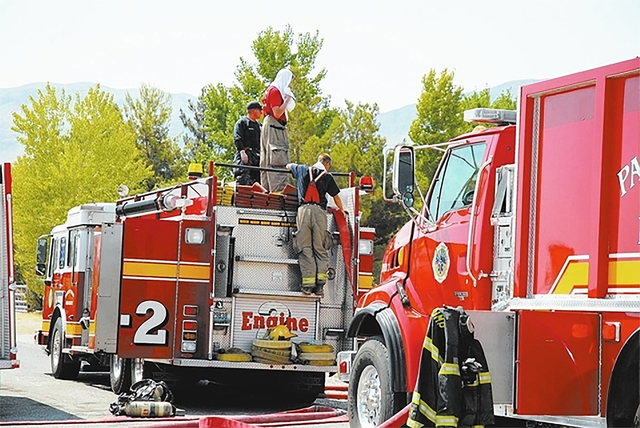 The Pahrump Valley Fire and Rescue chief had also several suspicious brush fires around town in recent days that may point to the use of illegal fireworks. Special to the Pahrump Valley Times

No injuries were reported after a fire destroyed an enclosed utility trailer last Tuesday, Oct. 18.

“Upon arrival, fire crews found the utility trailer that was well-involved in fire,” he said. “The exposures were plants and trees in the area but no immediate structures.”

Crews were able to knock down the fire in short order.

Lewis said the cause appeared to be accidental in nature.

On Thursday, fire crews were summoned to the area of Bell Vista Road and Barney Street for a report of a single-vehicle rollover crash just after 12:30 a.m.

Upon arrival, Lewis said the driver of the vehicle was not on scene, thus no medical aid was administered. The investigation is underway by the sheriff’s office.

A serious crash on the dry lake bed off of Homestead Road prompted a Mercy Air launch just before 1 p.m., on Saturday.

Also on Saturday, fire crews responded to BLM land on Gamebird Road for a brush fire, just before 9 p.m.

“Upon arrival, we found an approximately 100-square-foot mixed brush fire,” Lewis said. “There were numerous vehicles observed leaving that area and crews quickly suppressed the fire with no extensions to other nearby ground cover. The sheriff’s office was assisting with the investigation. The fire occurred on BLM land.”

Fire crews and law enforcement also responded to a suicide attempt by way of an explosion on the 900 block of Wilson Road on Sunday morning just after 8:30.

“It was a police action where an individual had tried to commit suicide by bomb,” Lewis said. “He opened a propane tank with the intent of causing an explosion in the building. Law enforcement investigated the incident and took that person into care and custody. We provided patient care for two individuals and we also completed an assessment of the building, including monitoring the air. The area was opened up and well-ventilated. There were no further issues.”

“We’ve had brush fires on Gamebird and Wilson roads where many of them have been running by the roadside,” he said. “Some of these fires have been indicated to have been possibly ignited by fireworks. They are all under investigation.”