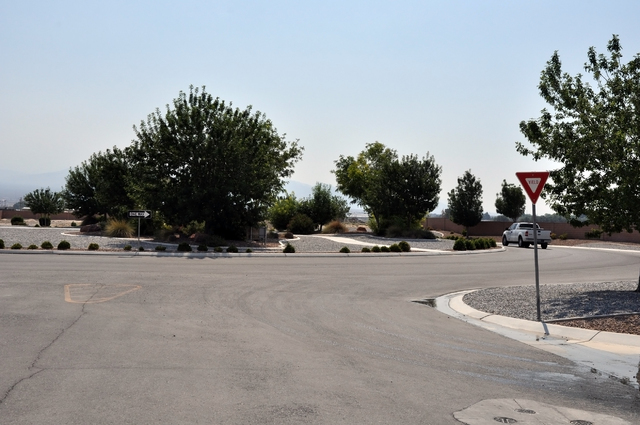 Horace Langford Jr./Pahrump Valley Times A truck drives through a roundabout at Cottonwood Estates in Pahrump. State transportation officials have put out to bid two roundabout projects on Highway 372.

The Nevada Department of Transportation has completed construction plans for two roundabouts in Pahrump and put both projects out to bid.

However, area emergency officials said they are concerned about the impacts on traffic during the construction on Highway 372.

At the Capital Improvement Advisory Committee meeting on Thursday, top fire and sheriff officials said they were concerned that detours during construction could slow down traffic and possibly present a challenge for emergency vehicles.

Scott Lewis, chief of the Pahrump Valley Fire and Rescue, said he was worried about getting fire trucks to the north and south ends of Pahrump Valley during the closure of Highway 372.

We had hoped that they would maybe consider doing one roundabout at a time. That kind of alleviates some of the burden on those secondary roads, Lewis said.

County Sheriff Sharon Wehrly had similar concerns. She said during the closure of Highway 372, Basin Avenue is going to be more congested.

Thats really going to impact us if we have an accident on Basin which we are going to because we have them on (Highway) 372 all the time. With that much of an increase, we are going to be looking at how we are going to detour people or end up going down Alaska (Way) depending upon that particular time frame, or we will go down Lola (Lane) at Irene (Street) and back around that way to (Highway) 160, she said.

The roundabouts will be at the intersection of Highway 372 and Pahrump Valley Boulevard, and further down the highway at Blagg Road. The highway falls under the construction and maintenance jurisdiction of the state, not the county.

NDOT spokesman Tony Illia said that the contractor that is awarded the project will work on a traffic management plan ensuring unencumbered access for first responders.

The department is sensitive to Nye Countys concerns, Illia told the Pahrump Valley Times. We consequently will require that the winning project contractor provide a traffic management plan that incorporates reasonable unencumbered access for emergency vehicles during construction.

The NDOT began advertising for construction bids on June 15. Illia said the organization expects to name a low bidder in late July.

Next, the contract award will go before the state transportation board for approval one month later. A notice to proceed will likely occur in September or October, Illia said.

The estimated cost of the project is between $3.2 million and $3.85 million, with construction lasting 140 working days, officials said.

After awarding the bid, NDOT plans to do the public workshops that will educate the public on how to use roundabouts.

However this workshop is advertised, a particular effort should probably be made for the senior citizens at Comstock Park by Blagg (Road). They were very, very concerned because they had to come out and go right around that roundabout, Capital Improvements Advisory Committee Chairman Mark Kimball said at the meeting.

Roundabouts are one-way circular intersections in which traffic flows around a center without stop signs or signals, according to the definition provided on NDOTs website.

The reason comes from roundabout traffic flows that require vehicles to enter and exit using rights turns at reduced speeds, he added.

We believe the roundabouts will make a great addition to Pahrumps transportation network, further improving mobility while also enhancing safety, he said.