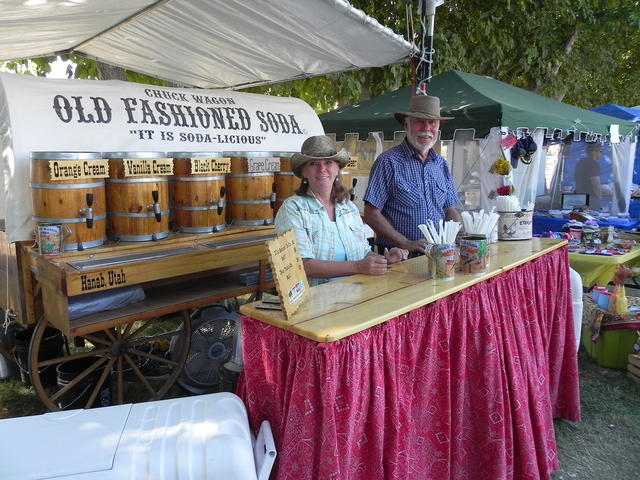 Jody Memmott, of Las Vegas, who ran the Texas Twister drink stand at this year’s Pahrump Fall Festival, said the day gets pretty long by the time the late concerts end, then she has to wake up early the next morning and do it again.

But Memmott, like other vendors at the festival who travel a circuit, likes the work anyway.

“It’s a good change. The people that you meet are incredible and the coordinators really take good care of you, especially out here in Pahrump. We’ve had a lot of great input on our website from people asking us to return,” Memmott said.

She attends events like the Boulder City Spring Jamboree and the San Genaro Fest in Las Vegas. Next weekend is the Boulder City Art in the Park, there’s the Henderson Car Show and also the Clark County Fair.

“We have 15 of these franchises, they‘re all family owned. I have kids in school so I don’t get to get out quite as often as they do. We usually start in April and go to October,

“We have a fresh fruit drink that we put in lemons, lime and oranges, but we have a special fruit juice made for us in Texas that we mix it into, it’s patented for us, nobody else can buy it. It’s our own special recipe,” Memmott said.

Cindy Foote, of Kanab, Utah, selling JC’s Chuck Wagon Old-Fashioned Soda, said they participate in events like the Lemon Festival in Upland, Calif., Raspberry Days on Bear Lake in northern Utah and the Country Explosion in Tooele, Utah. During their fifth Pahrump Fall Festival this year, Foote said some people have come back with the tin cups they bought at previous festivals. The Footes have a motor home and pull a cargo trailer behind it, often dry camping at events; in Pahrump they camp behind the Best Western.

‘We usually start Easter weekend and we work close to home in St. George (Utah), then we head to California because it’s warm. Once we finish in California we come back into Nevada, work out in Boulder City, then we head north in Utah because it’s starting to get warm in June.We always end up here at the fall festival of the end of our season,” she said.

Asked about how business was this year, Foote said, “we’re up this year, best festival that we’ve been to yet here, even though it was cold yesterday. Pahrump’s good to us.”

Some merchants donate part of the proceeds to local charities.

Bill Miller of Las Vegas, operator of the Ozark Barbecue, said he traveled around the country in his younger days, catering at the Houston Livestock and Rodeo Show, the Albuquerque Balloon Fest and interestingly enough, the Grateful Dead concerts. In his senior years, he sticks to events in the vicinity like Art in the Park at Boulder City, the Clark County Fair and Helldorado.

He donated 20 percent of the proceeds to the Rotaract Club, estimating it raised about $2,000 this year.

Jim Karr, with Kona Ice, said he raised over $11,000 for Pahrump area schools at local functions.

Speaking of his business at this year’s festival, Karr said, “we did about what we did last year. A lot of the kids know us. We have a lot of steady customers.”

Velma Abeyta said people expect to find her funnel cakes when they go to a festival. She ran out of funnel cakes Sunday but was still busy selling kettle corn, working at the counter in front of a hot stove. Abeyta said they attend Utah festivals like the Derby, the Las Vegas gay pride festival, and were in Pahrump for the Fourth of July Freedom Fest.

Abeyta said she hauls her equipment in a mini-van, she also travels a warm weather circuit.

“It’s very seasonal so it just depends, during wintertime it gets less and less,” she said. On Oct. 4 there’s an event in Victorville, Calif., and they will be doing Halloween events soon.

As for her business this year at the fall festival, Abeyta said, “oh my God it was so surprisingly great. It really was. We were very happy.”