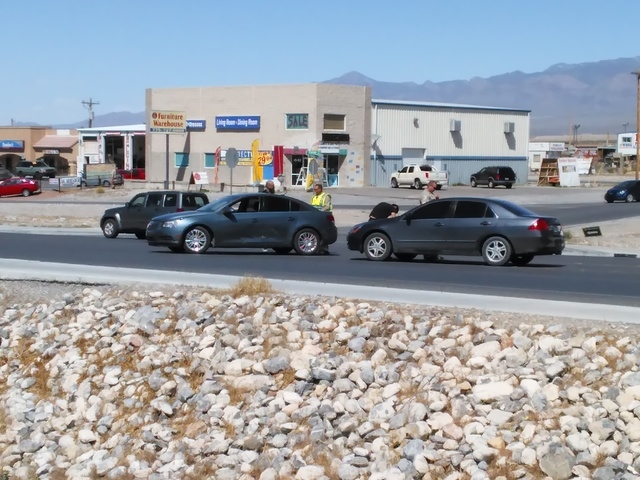 Pahrump Valley Fire and Rescue crews were summoned to a bizarre call for service last Saturday along East Kellogg Road just after 2 p.m.

Fire Chief Scott Lewis said the assignment involved a man who got his finger stuck inside the opening of a vehicle’s fuel tank.

“Crews were dispatched for an extrication assignment,” he said. “Upon arrival, the crew found that a gentlemen had his finger stuck in the area where you fuel up your car. His finger was stuck in a manner that required us to remove sections of the car. The crew had to cut the car’s body panels to allow the finger to be removed. Eventually the finger was removed intact and without incident. He was not transported to the hospital.”

On Monday, fire crews were dispatched to the north end of town after dispatch received reports of a brush fire at a residence along the 300 block of Nopah Vista.

“Upon arrival, crews found several trees and a ground cover fire,” Lewis said. “The individual at the residence attempted to burn out a large ant nest with a propane weed burner, when the fire ignited the nearby grass and palm trees. There were no extensions to nearby structures and the fire was quickly extinguished.”

The homeless camp behind the Pahrump Nugget on Tuesday was the scene of another fire, deemed suspicious.

“Crews were dispatched for a report of several fires occurring near what is referred to as the homeless camp behind the Pahrump Nugget,” Lewis said. “Crews arrived and found several unauthorized burns being conducted in that area producing large plumes of smoke. The fires were extinguished without incident and there were no extensions to any of the nearby makeshift structures.”

A residence along Linda Street on Tuesday was the scene of another brush fire from an authorized controlled burn.

“The individual thought the fire was out and left the scene, however the winds kicked up, took the fire and extended it to just shy of the primary dwelling,” Lewis said. “The fire was extinguished without incident. Eventually the homeowner returned and we took care of it.”

“We were dispatched to a motor vehicle accident along Highway 160 in the area of Mesquite,” Lewis said. “It was a rollover with no entrapment. Engine One secured the vehicle and found the driver standing with a sheriff’s deputy. There was no medical complaint.”

Lewis also noted his crews were on standby over the weekend as the annual Baker to Vegas run rolled into town.

“During the weekend we provided crews for several events going on in the community including the Baker to Vegas run,” Lewis said. “It was completed without incident and there were no responses related to the runners or any of the activities on the roadway.”