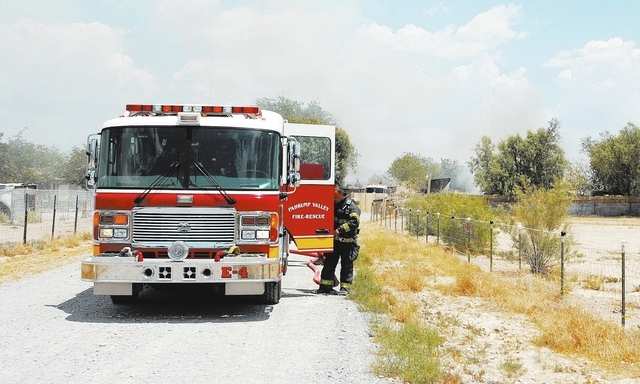 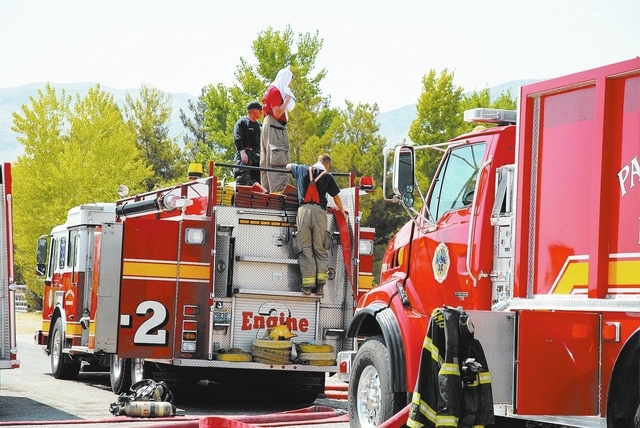 The Pahrump town board convened twice this week to take on new business.

Today board members will hold a special 2 p.m. meeting at the Bob Ruud Community Center focusing on mechanical issues within the town’s fire department fleet.

The board is expected to vote on two separate items relating to the department’s aging pumper trucks, which are the workhorses of the fleet.

On the first item, board members will consider whether to approve an emergency acquisition of a refurbished fire pumper.

The second item relates to seeking a Request For Proposal (RFP) to eliminate two fire pumpers, older pieces of fire apparatus from the department’s inventory and request bids for two refurbished fire pumpers at a cost not to exceed $340,000.

At present, the fleet consists of six engine pumpers .

The pumpers respond to virtually every call for service during fires and vehicle accidents in the valley.

Fire Chief Scott Lewis said a recent mechanical failure on one of the pumper trucks prompted the department to approach the board.

The truck has responded to 3,364 incidents in five years and Lewis said it is no longer considered cost effective to repair and maintain.

“We had a catastrophic mechanical failure of a 1996 pumper due to its age and it doesn’t warrant us to affect a repair because the same type of power plant that is in that truck is an outdated model. It is very difficult to get parts for it. Due to the unreliability of our harsh environment during the summer, it’s more prudent for us to replace it especially considering its age,” he said.

Lewis said his proposal would eliminate some older vehicles from the department’s fleet to acquire one refurbished pumper at a cost not to exceed $150,000 after trade-ins.

The RFP according to Lewis will help to streamline the department’s fleet, eliminating increased maintenance and repair expenses as well as time spent to train crews on different types of equipment.

“These are not additions to the fleet. We are looking to shed additional apparatus from the fleet. This is actually part of the plan for a reduction in the size of the overall fleet,” Lewis said.

Board Chairman Harley Kulkin iagreed that the pumper’s engine is obsolete and should be updated.

“It’s a two-cycle Detroit engine. In fact, California has outlawed the use of those because of their emissions output. Those two-cycles love to drip oil. They run forever but they are not the most efficient as far as fuel economy,” he said.

Kulkin said he liked the idea that Lewis chose to find a suitable piece of equipment without having to cross state lines, which would increase the overall costs.

“The one they are looking at is a former truck from Henderson, which has a rebuilt engine,” he said.