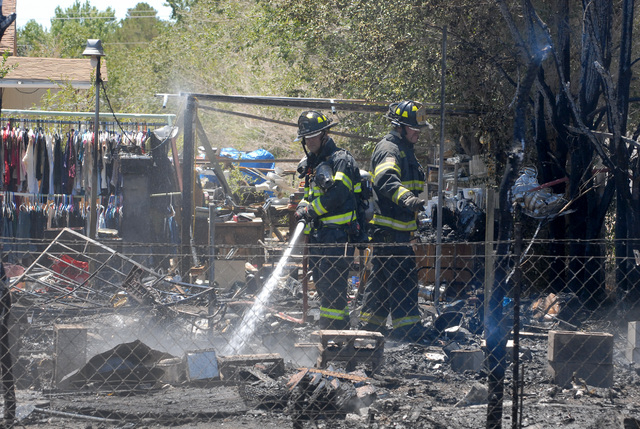 The term “fire sale” took on new meaning Wednesday morning when Pahrump Valley Fire and Rescue Services (PVFRS) responded to a call on the south end of town about 11:30 a.m.

Though the original dispatch alerted crews to a rubbish fire, PVFRS Chief Scott Lewis said the scope of the blaze changed en route to 4101 Cheyenne.

“We were dispatched to a report of this fire and it was thought to have extended not only to the nearby trees, but also to the primary dwelling, which required us to upgrade the assignment to a structure fire,” he said.

Homeowner Robert Rooks, an 18-year resident, said he was setting up for a yard sale when the fire occurred.

Rooks used his garden hose to stop the flames from approaching his home just a few feet away.

Though he said he had no idea how the fire started, many of the items for his upcoming yard sale were completely destroyed.

He said he holds yard sales to help support himself.

“I wish I had a clue. There were some leaf blowers and weed eaters that had gasoline in the tanks. Other than that, I don’t know. I didn’t want it to spread to my neighbor’s house. I just stood at the edge and kept it from moving that direction. I probably lost a couple of thousand dollars worth of stuff,” he said.

Once crews were on scene, Lewis said they were able to extinguish the flames in short order.

“Everything was quickly controlled and there were no extensions to primary dwellings or neighboring properties. We are investigating what may have happened here. At this point, it appears to be accidental and no injuries were reported,” he said.

Lewis also noted that his crews responded to another fire at the same location a few years ago.