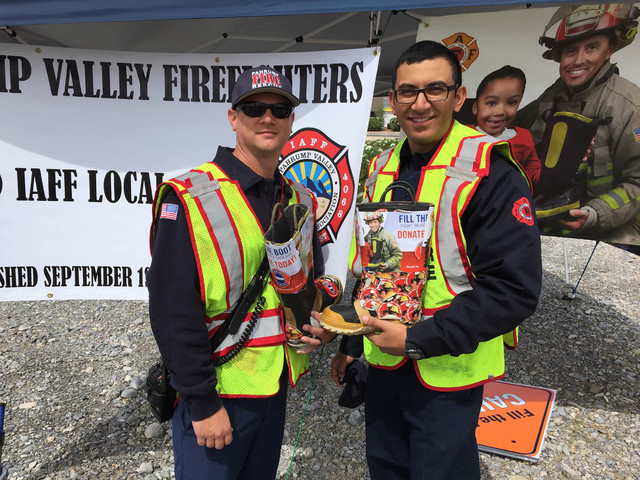 Local motorists spotting members of the Pahrump Valley Fire and Rescue Services at the intersection of Highways 160 and 372 should keep two things in mind this weekend.

The firefighters are performing a service that benefits many area families and they’re risking their personal safety for the cause.

The Muscular Dystrophy Association’s (MDA) annual “Boot Drive” is in full swing as evidenced by the presence of fire crews at the town’s busiest intersection, which began last week.

The annual event is the fire department’s major fundraiser for the association, as firefighters, with boots in hand are seeking any kind of monetary donation.

“Next month we have our MDA summer camp that we send kids to,” he said. “It’s an annual camp mostly for kids. Everybody who goes are changed. The kids get to play and take part in numerous activities. It’s very beneficial in many ways.”

Bigelow also said fire crews are pleased to be back on the streets after an absence of more than two years.

“We are going to be out through the weekend and this is the second year we are back on the streets,” he said. “There was an incident in Las Vegas years ago where a fireman had gotten hit by a car. Just recently we were finally able to get back on the streets. Of course the main concern is safety, that’s why everybody is in their florescent vests.”

Bigelow also said the monies will support a community event coming up in July.

“That’s when we have planned a free swim at Petrack Park that that we are sponsoring as well as the ‘check your seat in the heat’ program where we remind adults about leaving kids in the car during the hot summer months,” he said.

Bigelow said crews hope they can surpass the dollar amount posted during last year’s drive at $11,226.

“Our goal this year is $12,000,” he said. We accept any and all monetary donations for this important program that’s been going on for more than 60 years in Nevada.”