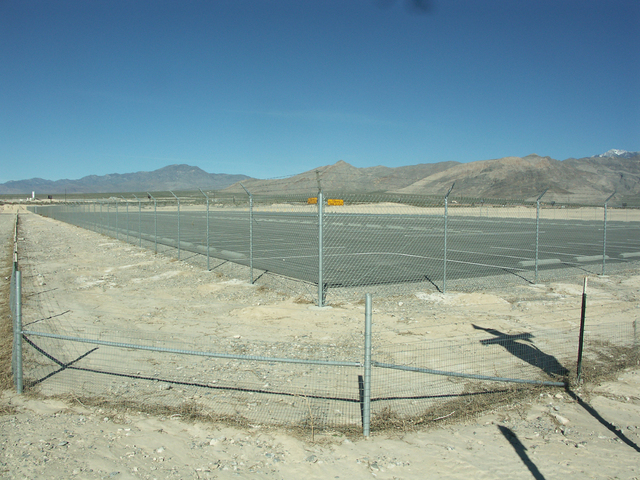 Should the project, proposed by Casey Steingart of the Nye County Fireworks Association, successfully move forward, it could provide the county with a much needed revenue line.

While various fireworks can be purchased in the county, it is illegal to use fireworks that shoot in the air or explode.

Steingart told commissioners that the county would be guaranteed upfront costs of $50,000 and likely see an annual benefit, generated by permits and other fees, of up to $200,000.

A short presentation included a proposed “Shooter Site Plan” which delineates 16 possible launch sites measuring 150-feet square. Though the preferred location for the fireworks display launch site is near water drainage on the property, it would temporarily be located on the paved area.

“It will be very safe,” Steingart said.

Lacking is site-source water for extinguishing purposes, which Schinhofen said could likely be temporarily trucked in. Also needed is a memorandum of understanding outlining refuse removal, liability insurance costs and other concerns.

County manager Pam Webster said the infusion of funds and dedicated use would be a good reason to look at securing a bond for further development of the fairgrounds.

A more detailed proposal will be made at a future meeting.

The Nye County Commission, sitting as the the governing board of the town of Pahrump, approved the discharge of nearly a quarter of a million dollars in bad debt for the fourth fiscal quarter of 2014. That figure is typical, according to Pahrump Finance Director Michael Sullivan.

The disclosure brought the scrutiny of board members Donna Cox and Frank Carbone who respectively suggested privatization of the service and an increase in associated costs and rates for use.

In response to a question posed by Commissioner Lorinda Wichman, Sullivan said that claims are made against estates of deceased individuals who have unpaid ambulance fees. Of the $70,301 billed to deceased in the final quarter of 2014, $57,061 was written off and moved into collection.

The measure passed with a vote of 4 – 1, with Cox voting against writing off the bad debt.