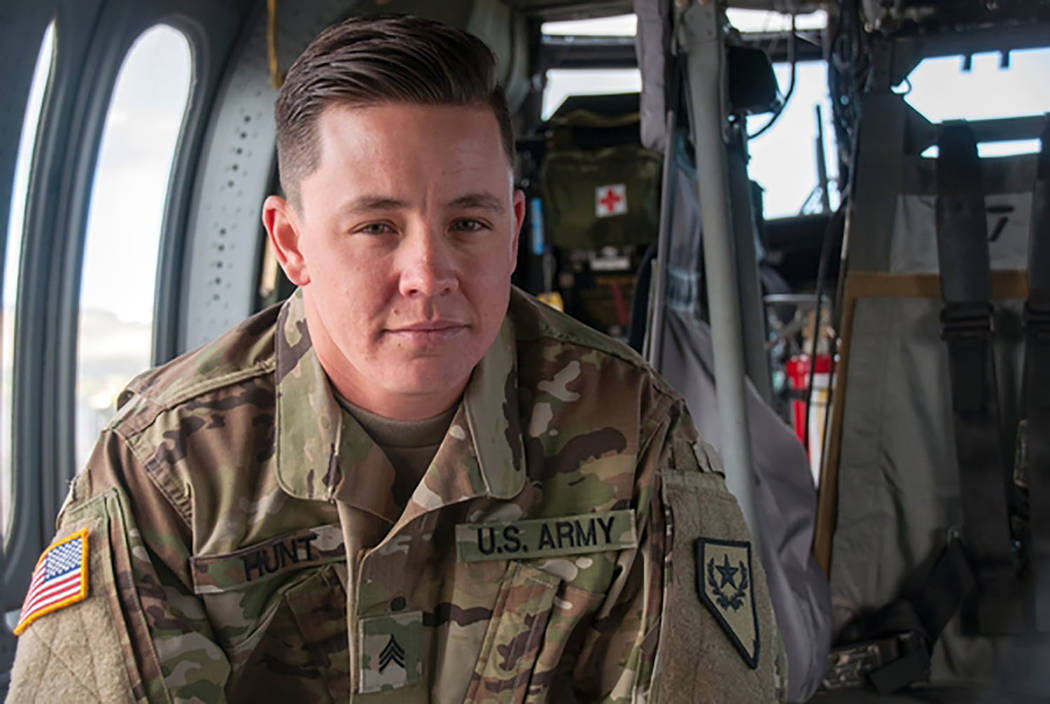 Photo by Tech. Sgt. Emerson Marcus/Nevada National Guard Sgt. Sam Hunt of the Nevada Army Guard’s G Company, 2/238th General Support Aviation Battalion, is the first openly transgender soldier in the Nevada National Guard and is a proponent of the Dept. of Defense's upcoming policy that gender status is not a disqualifying factor from enlistment in the military.

Editor’s note: President Donald Trump announced this week that transgender people would be barred from U.S. military service “in any capacity.” Trump said the U.S. military “cannot be burdened with the tremendous medical costs and disruption.” A date for the policy change is unclear. This story introduces us to Nevada’s first openly transgender soldier. Check the Pahrump Valley Times for updates on the Nevada soldier.

She begrudgingly wore feminine clothes at McQueen High School in Reno. At the University of Nevada, Reno, Hunt played Division 1 softball and soccer where she was more comfortable strolling around campus wearing gender-neutral athletic sweats and sportswear as opposed to dresses and high heels.

“Except when we traveled, we all wore a dress or skirt,” Hunt said. “It was awkward and really uncomfortable for me.”

After a deployment to Kuwait in 2015 — months before the U.S. military lifted its transgender ban — Hunt explored options to end the awkward feeling surrounding her gender identification.

That’s when Hunt began a gender transition and is today the first openly transgender soldier in the Nevada National Guard.

“It wasn’t just like one morning I woke up and said, ‘Yup, I’m going to be a male today,’” said Hunt, who now goes by Sam. “I think it was more of a process… The process is very different for everyone.”

Prior to President Donald Trump’s comments this week, the Department of Defense lifted its transgender ban last summer for service members already enlisted in the military.

“Although relatively few in number, we’re talking about talented and trained Americans who are serving their country with honor and distinction,” then-Secretary of Defense Ash Carter said during the announcement in 2016. “We want to take the opportunity to retain people whose talent we’ve invested in and who’ve proven themselves.”

As an extension of the 2016 policy that lifted the ban for those already serving in the military, a person’s gender status – including being transgender — was no longer to be a disqualifying factor from enlisting in the military beginning July 1, according to a National Guard Bureau news release last week.

Meanwhile, members of the active military and reserve components have undergone training sessions on the new policy over the course of the last year in advance of the proposed full integration next month.

“All of this is an effort to ensure the seamless transition and the full implementation of [the] DoD policy,” Zenia Boswell of the Army National Guard’s Personnel Policy Division said in an interview earlier this year. “This is all about diversity and inclusion.”

“I didn’t know anybody in the Nevada Army Guard,” said Hunt, who took on the physical appearance of a man, including a short haircut, by the time she entered the Army Guard. “I was telling people I was a male in the civilian world, but I was still a female on the record books in the Army. It was a strange transition.”

“One sergeant walked in my office when I was with Hunt and said ‘he,’ (referring to Hunt),” Dennington said. “I said, ‘That’s a she.’ Hunt said, ‘Don’t bother correcting them, I’m transitioning.’ Now the whole unit calls him ‘he.’ We’ve decided to let him go by what he prefers to go by, because we don’t have a problem with him.”

Last year, weeks after the end of the transgender ban, during a drill weekend in the summer of 2016, Hunt approached his chain of command and told them about the transition.

Capt. Dustin Petersen, the unit commander at the time, immediately researched how other organizations approach the topic of transgender employees.

“At first it was shocking, not in a bad way, but I had never dealt with this,” said Petersen, the aviation unit’s commander at the time. “The day I heard, I did a lot of research. I researched how corporate America dealt with incorporating transgender people in the workforce. I tried to get as much data as I could. I didn’t want a grand unveiling. I thought that would be tacky and potentially humiliating for Hunt. A grand unveiling is wrong and cheap. Just because he is transgender, that’s no reason for a special ceremony. I didn’t want to approach the unit by bringing Hunt in front of a formation.”

“Leadership was very supportive,” Hunt said. “My platoon sergeant said, ‘Whatever you need, let me know. Obviously, you’re going to be a first. If anybody gives you any grief, I don’t care what happens, you come tell me.’ They eventually told everyone in the unit, and they said, ‘Oh, we know,’ as if it wasn’t a big deal. It’s a super cool unit.”

Now two years into hormone therapy, Hunt has written a memorandum requesting to be recognized as a male. It was awaiting approval from National Guard Bureau.

Hunt meets the Army physical fitness standards for a 30-year-old male and scored a 260 out of 300 on his most recent test.

Hunt now feels comfortable as a man. But it wasn’t easy. The process took many years, through a childhood and adulthood where Hunt never fit societal norms of what it meant to be a girl and woman.

Hunt grew up in what he called “a non-traditional family.”

His parents divorced shortly after his birth. At 7, Hunt’s 20-year-old sister died. She left three children behind and Hunt’s mother eventually gained custody of them. Once the baby of the family with two older siblings, Hunt suddenly became the oldest of four and a parental figure for the three younger children.

“Resiliency is an interesting thing. The fact that I had to grow up and be the adult kind of helped me grow to be the person I am today,” said Hunt, who works as a substance abuse, marriage and family therapist intern. “I don’t know where I would have been if my sister hadn’t died. It was such a huge moment in my life.”

In addition to family challenges, Hunt said his youth was non-traditional in other ways, too.

A self-described tomboy, Hunt dressed and acted differently than most girls, so much so that his non-conformist appearance became a way of life, he said.

“Did I think anything different of it? No, because there was nothing to compare it to,” Hunt said. “I just thought I was that friend who was different. For me, different was normal. I never had to question who I was. I just thought, ‘Oh, I’m different, cool.’”

Throughout Hunt’s youth and time in college, sports served as an avenue of expression and established an identity.

Hunt was a three-sport athlete at McQueen, playing soccer, basketball and softball.

In 2005, Nevada offered Hunt an athletic scholarship to play third base for its softball team. Hunt also played goalkeeper for the Nevada soccer team after the soccer coach asked if Hunt would be willing to play two sports because the team needed someone between the posts.

In 2009, Hunt hit .296 for Nevada and finished second on the team with nine home runs. Nevada went 40-19, won the Western Athletic Conference regular season championship and made the NCAA Tournament before losing to No. 22 Cal Poly in the regionals. In that game, Hunt scored the Wolf Pack’s only run — a home run in Hunt’s final career at bat.

“I wasn’t sure how people were going to view me as a proud female athlete after my transition,” said Hunt, who has since stayed on the team as a coach. “That’s how people know me (as a female athlete). How am I going to change this person again? … Eventually, I got over it and dropped the ‘female’ and realized I’m an ‘athlete.’”

Hunt’s background growing up with an alcoholic father, now sober two decades later, and the experience of losing his sister at a young age played a role in that career path, he said.

He also has a girlfriend he met in May 2016 during the transition.

“She has been one of the most supportive people,” Hunt said of his girlfriend, Nichole Raymond.

Hunt has a year remaining on his enlistment in the Nevada National Guard and hasn’t decided if he wants to re-enlist, but he mentioned the importance the military has played in his life and is grateful of the acceptance he’s received from other Soldiers during the transition.

“It’s hard to come across good people and great friends, especially ones you’ve served with,” said Nevada Air National Guard Staff Sgt. Jillian Green, who deployed with Hunt in 2015. “Hunt is one of the best people I know.”

Hunt also says he wants to educate people on issues concerning members of the lesbian, gay, bisexual, transgender and queer community, highlighting the different experiences for members of that community and other people.

“Each person’s experience is unique and different from the next. It’s different based on where you live, who you spend your life with, who is supporting you, and what you experience in life,” Hunt said. “Some people will struggle more than others. My experience has been awesome. I’ve had the acceptance and support of family and friends. I think that is a motivator for other people.

“No matter if you’re transgender, straight, gay, lesbian, you’re still a person who struggles throughout life. It’s important to not shut people out just because they are different.”

Tech. Sgt. Emerson Marcus is a state historian with the Nevada National Guard.

Sam Hunt issued a statement to KRNV-TV in Reno on Wednesday after Trump’s comments.

“As of today, my supervisors and commanders have not informed me of any changes to my status as a male soldier in the Nevada Army National Guard,” Hunt said. “Until told otherwise, I will continue serving this nation and state, as I have since 2009.”