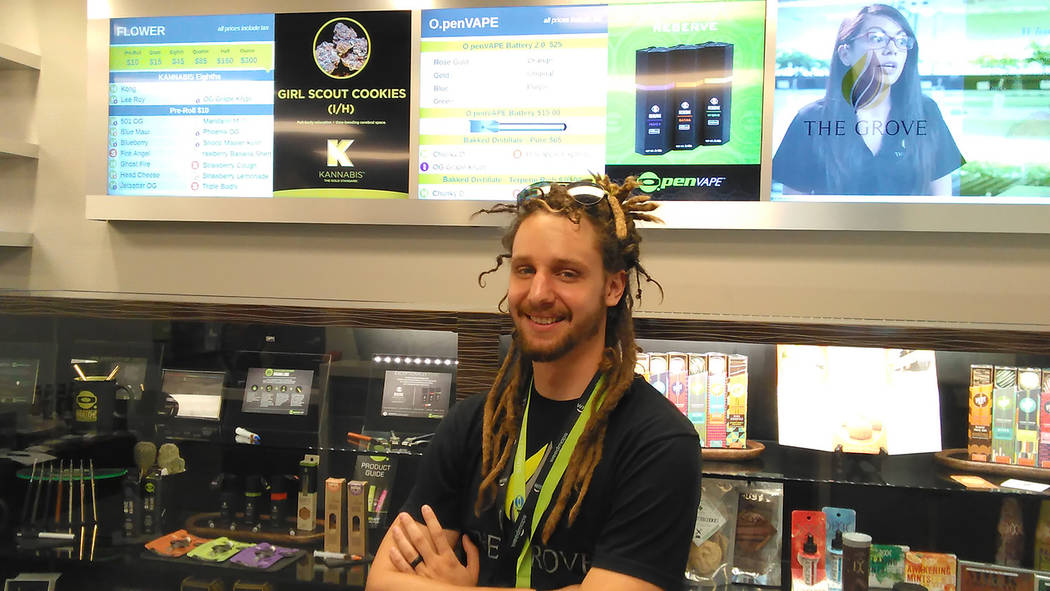 Selwyn Harris/Pahrump Valley Times Grove ‘budtender’ Ryan Jordan stands before scores of products at the Grove Dispensary. The medical marijuana facility is hosting a job fair from 9 a.m. to 1 p.m. on Saturday. Grove officials look to hire upward of 20 employees by July 1.

After a little more than a year doing business in Pahrump, The Grove medical marijuana dispensary is looking to increase its staffing, with a hiring event from 9 a.m. to 1 p.m. on Saturday.

Grove manager Zach Wright said he wants to hire at least 20 employees for his 1541 E. Basin Ave., location, and he’s not just blowing smoke, as actual interviews will be performed on site.

“We are looking for anyone 21 and over, which is the age requirement by law to work in a medical marijuana or recreational marijuana dispensary,” he said. “There can be no felony criminal record, which means you have to pass a background check. I need them to bring with them, a full page resume and they can always send it over in advance.”

Wright noted that retail experience and some knowledge of cannabis would be a plus for prospective employees.

“That is definitely what we are looking for because it’s going to be very, very fast-paced in the beginning,” he stressed. “We are looking to get our stuff together before July 1st. There will be full-time and part-time positions. The wages are very competitive and we also offer health benefits to our full-time employees as well. We are also looking for security personnel as well.”

Additionally, Wright said as recreational marijuana is scheduled to become legal come July, the need for extra staffing is urgent.

He also noted that recreational pot may create an uptick in the medical marijuana industry throughout the state.

“Just looking at the logistics of it and going over the analysis, it shows the medical industry is probably going to boom a little bit more,” he said. “We are seeing a rise in people obtaining their medical marijuana cards and that’s just due to the concern of the sales tax being so high on the recreational marijuana side.”

As a result, Wright said he and staff are anticipating an average of up to 500 patients per day.

“The wages here are very competitive, especially with dispensaries in Las Vegas,” he said. “Some of our budtenders are some of the highest paid in the industry. We do that because we respect their knowledge and their care. We think people should be properly compensated for that. I really don’t see recreational pot being a detriment to the medical pot industry.”

Wright also noted that a medical group based in Colorado and Las Vegas are now planning to provide an additional location in Pahrump to assist with obtaining medical marijuana cards.

“Cohen Medical is actually building an office right next door,” he said. “They can help you get your card as well. They had a small presence out here during our 420 party back in April. They talked to some patients and the information is out there on how to get your medical marijuana card through Cohen Medical.”

Following Saturday’s brief interviews, callbacks will begin the next week.