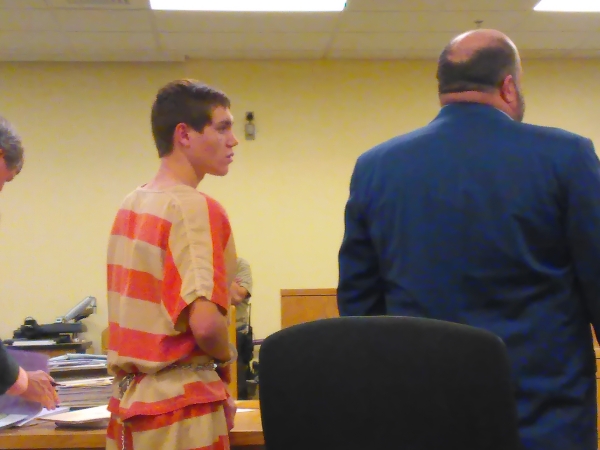 The man charged with felony child abuse accepted a plea agreement during a preliminary hearing in Pahrump Justice Court on Thursday.

Michael Haver, 20, will also remain behind bars on $200,000 bail until his arraignment in Fifth District Court in January. Haver is scheduled for arraignment in district court on Jan. 11 at 9 a.m.

Defense attorney Jason Earnest said his client agreed to the plea bargain after waiving his case up to district court.

“It’s not official until it gets to district court,” he said. “He’ll be entering a guilty plea to child abuse causing substantial bodily harm, which is probationable and his exposure is two-to-20 years and the state will firmly recommend probation.”

Earnest said if his client completes his probation successfully Haver’s original charge will be reduced from a category “B” felony to a gross misdemeanor.

“The state also reserves the right to argue the terms of probation,” he said. “On cases like that, the state can ask for up to 364 days of county jail time and I know for a fact, they are going to be asking for jail time. How much? I don’t know. He’s a young man with no criminal history. It’s a just offer.”

He was arrested at Desert View Hospital on Oct 25, after a doctor suspected a case of child abuse.

The infant arrived in the emergency room with a broken femur just after 3 a.m.

Haver is the father of the child.

Earnest also said if his client violates probation, there will be very severe consequences awaiting him.

“The state will have a huge, huge hammer over this young man’s head,” he said. “If my client so much as gets caught doing something silly, the state will withdraw from negotiations. If my client does not meet with me, or make his court appearances, the state will withdraw and my client will lose the opportunity to have probation and he’ll lose the opportunity to have it dropped down to a gross misdemeanor. He is facing two to 20 years in jail. He has everything to lose and everything to gain.”

Earnest also argued for the release of his client, who’s been in custody since Oct. 25, but Judge Margaret Whitaker stood firm on keeping Haver in custody.

“I will argue that again once the case goes to district court,” Earnest said following the hearing. “The state is recommending probation and I reserve the right to argue for probation. It was the judge’s discretion and I have no problem with that. He’s going to get out eventually.”

After the hearing, the child’s mother said her infant daughter appears to be recovering well.

“She is doing fine, she’s a fighter and she’s strong,” the mother said. “She’s in a lot of pain but she gets her cast off on the 20th of this month. I’m holding up okay and taking it one day at a time.”

The mother also had concerns about the possibility of Haver being released on his own recognizance.

She had been dating Haver for roughly two years.

“I do not want to see him released because justice needs to be served,” she said.