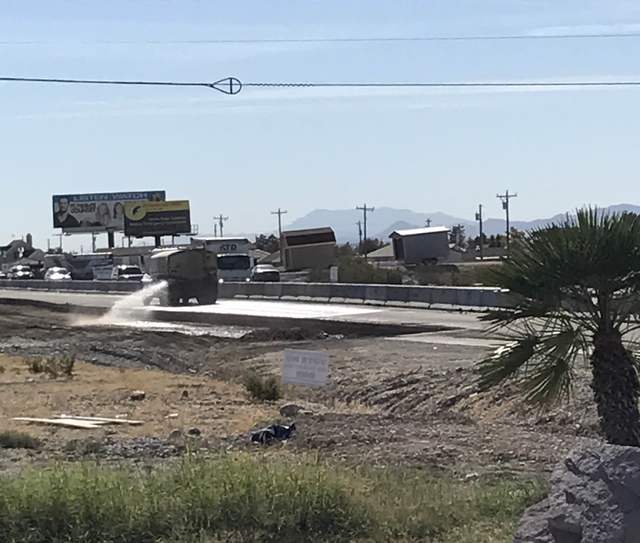 The completion date for the State Route 160 widening project under construction between Calvada Boulevard and Rainbow Avenue has been pushed back at least a month and could stretch into 2017 if the weather doesn’t cooperate. Mick Akers/Pahrump Valley Times

The completion date for the State Route 160 widening project under construction in town has been pushed back at least a month.

The $3.5 million, 1.75-mile-long widening of SR-160 between Rainbow Avenue and Calvada Boulevard is now tentatively slated to finish in December, according to the Nevada Department of Transportation. The project, which was originally scheduled to be completed in November, experienced unexpected delays related to brittle underground stormwater pipes that required reinforcement.

According to NDOT spokesperson Tony Illia, if the weather doesn’t cooperate with the contractor for the paving, the completion date could stretch into next year.

“Las Vegas Paving will consequently undertake paving operations during three Saturdays in November,” Illia said. “However, if the temperature drops too low, work could be forced into spring 2017. Cold weather can cause asphalt pavement to cool too quickly, making it difficult to achieve the proper compacted density.

The project will expand the highway from two to four travel lanes, adding a center turn lane and flattening side slope shoulders for safer vehicle turnouts.

The project requires 23,000 tons of asphalt or enough blacktop to pave 3,600 driveways, according to NDOT.

As one state-funded road project in town nears its potential completion date, another project is in its infancy.

NDOT broke ground on a pair of roundabouts along a one-mile-long stretch of State Route 372 on Oct. 3, at the intersections of Blagg Road and Pahrump Valley Boulevard.

The $4.05 million project will create a one-lane roundabout at Blagg Road and a two-lane roundabout at Pahrump Valley Boulevard, and also features sections of new curb, gutters and sidewalks, in addition to new handicap-accessible pedestrian crossings in each direction.

While the project takes place, over-sized vehicles are being directed onto an alternate route.

“Tractor-trailers and over-dimensional trucks are being detoured along SR-160 to West Basin Avenue, to South Lola Lane, then onto SR-372 through April 2017,” Illia said.

Pahrump Valley Boulevard and Blagg Road are closed 300 and 500 feet north, respectively, from SR-372 through Jan. 1.

In addition to the functional aspects of the roundabout project, landscaping and new signage is also included.

Las Vegas Paving has been performing surveying work on the pair of sites and construction is set to begin soon, with four-day, 10-hour work weeks planned. Flagger operations on the project will begin next year, and is still on track to finish by late April.

Despite the construction delays, NDOT says there have been no emergency first responder issues thus far.

One other NDOT project affecting commuters between Pahrump and Las Vegas, the widening project on SR-160 in Clark County, is on track with its spring completion date.

The $16.5 million, five-mile-long expansion project will widen the highway from two lanes to four travel lanes between State Route 159 and Mile Marker 16.6. The target finish date of April is still planned.

Aside from the widening of the road, other improvements include flattening side slope shoulders for safer vehicle turnouts, installing new drainage pipe, barrier and guardrails and hydro-seeding 38 acres.

The first mile west from SR-159 was fast-tracked, opening June 13, due to the numerous homes and driveways that are along that stretch of SR-160.

The 24-hour bicycle ban that NDOT implemented on June 1 remains in effect.

Bicycles are prohibited on the stretch due to the work zone configuration, which consists of one lane in each direction of travel, limited shoulder widths, road grade, and differential speeds that are not conducive for both bicycles and motor vehicles to share the road.