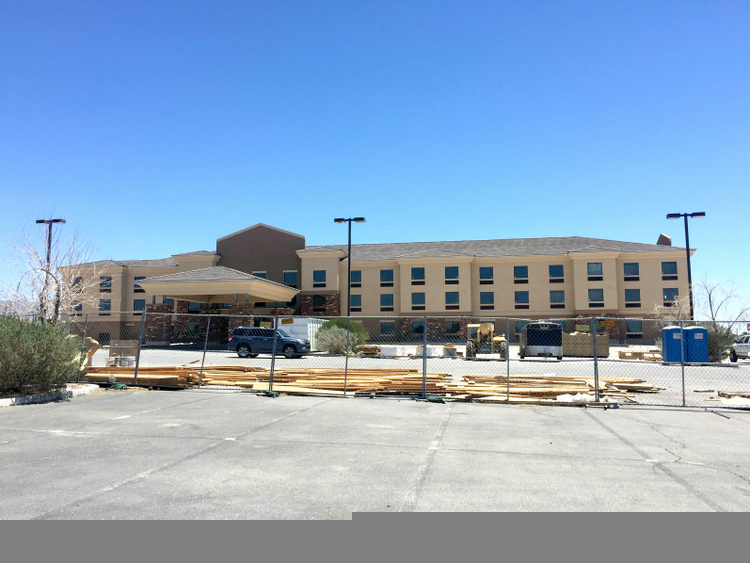 With the Holiday Inn Express construction inching toward completion, the positions required to run the hotel are in the process of being filled.

In conjunction with the NyE Communities Coalition, Safari Hospitality, the property management company heading the Holiday Inn, located at 861 S. Highway 160, is looking to fill around 20 positions at the site.

There will be no job fair to fill the positions, but interested applicants are urged to go to the NyE Community Coalition, located at 1020 E. Wilson, to apply.

Since there is no job fair to advertise the jobs, the coalition has been relying on the Internet and people around town to inform job seekers that the hiring process is taking place.

âThe positions are posted on the job board here at the coalition and at the library,â said Tammi Odegard, Workforce Director at the coalition. âThey are on the state job bank, so people can see the jobs that are listed â¦ and I think itâs been a lot of word of mouth.â

All of those that have already applied for the jobs have been Pahrump residents as far as Odegard is aware.

Odegard said three of the positions have been filled, including the general manager position, who is actively assisting with the hiring process of the other available positions.

Since posting the jobs earlier this month the showing by those applying for the various positions, ranging from breakfast attendant to housekeeping manager, has been strong.

âItâs been a good turnout,â Odegard said. âWeâve had some real good quality applicants, and itâs been going really well.â

The hotel was originally planned to be completed in late Spring , but saw some delays and now appears near complete, although no timetable is set for the hotelâs opening date.

The 60,000-square-foot, three-story facility will feature 103 hotel rooms and will have an outdoor pool and spa and a fitness center.

Anyone interested in applying must be registered on the State of Nevadaâs job board, then stop by the coalition to fill out the paper application that will be sent to the employer.

With jobs at a premium in town, the addition of these positions to the area is important according to Odegard.

âItâs a big deal,â she said. âA lot of lives are going to be impacted by these jobs.â